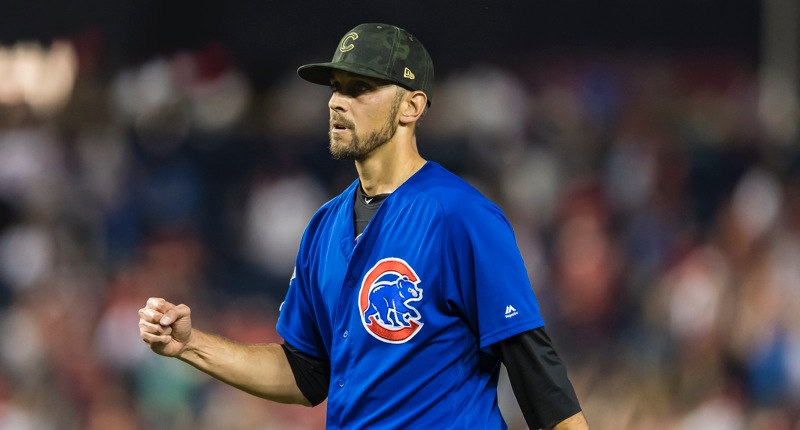 I will avoid any cheesy ‘Game of Thrones’ jokes about Steve Cishek swooping in at the last minute to be the real ruler last night (whoops), but I do want to give him some love for a killer performance out of the pen last night.

After Kyle Hendricks started to stumble, after Brandon Kintzler gave up a homer to bring the Nationals within a single run in the 7th, and after Xavier Cedeño allowed the tying run to reach with Anthony Rendon coming to the plate, Joe Maddon turned to Steve Cishek to get out of the inning. Which he did.

And then he just kept pitching:

We often joke about Cishek being ground into the dirt, given how heavily he was used last year (and then how he seemed to break down a bit late), so Joe Maddon will have to be careful about how much he leans on Cishek with Pedro Strop and Brandon Morrow both out. I get the instinct, obviously! The guy is so good! Last night dropped his ERA to 2.45, and he also features a 59.3% groundball rate, a 26.4% strikeout rate, a 9.2% walk rate, and a gorgeous 0.41 HR/9.

As for the using him too much thing, the nice thing is that Cishek was rather efficient last night, requiring just 27 pitches to get through his 2.1 innings. Thanks to his work, the Cubs should have a significant complement of arms available tonight in case Yu Darvish goes short, which, well, I think we kinda just have to assume that at this point.

So far this year, Cishek has made 21 appearances, which is tops on the Cubs, but only 23rd in baseball. On an innings basis, he’s not in the top 30 in usage among relievers. That said, the Cubs have played fewer games than most teams, so it’ll require some additional restraint going forward not to lean on him too heavily if he keeps up this pace. Right now, his velocity looks just about where it should be, after falling off quite a bit in the second half last year (from 92ish mph early to 90ish mph later on).

Interestingly, when Cishek started the season this year, he was more in the 90 mph range, and has only recently ticked back up to 91/92. Anyway, that might be an indicator to watch.