When You Do Something Not Seen Since The Sandberg Game, You Know You Had a Good Night Skip to content 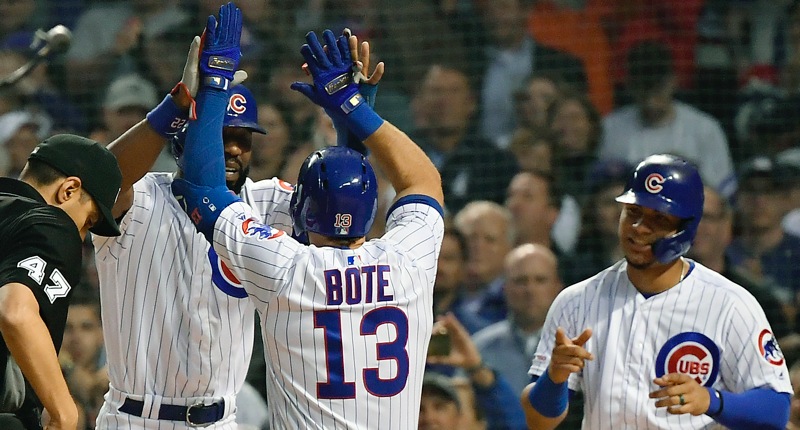 By the end of last night’s game, I think the craziness of the scoring and the threat of implosion-related peril had us sufficiently focused on baseball.

But the juicy middle of last night’s game? Come on. Of course I was deeply distracted by the Craig Kimbrel news! For that reason, I want to make sure to spotlight the game David Bote was having while all that was going on, because it was truly historic.

First, the highlights of his four-hit, seven-RBI night – including a bases-clearing double and a three-run homer (BOTH with two outs!):

“David Bote” is the only name on #Cubs fans minds tonight. pic.twitter.com/yzgJ4p6IHU

That is some seriously clutch stuff in a game the Cubs ultimately won by only one run. Without Bote, that’s a blowout for the Rockies. By the 8th inning, the crowd was chanting BO-TE, BO-TE, BO-TE.

How about these crazy facts about the night:

David Bote: 7 RBI most by a #Cubs second baseman since Ryne Sandberg in the Sandberg game 6/23/1984

That’s some company right there. We probably won’t call this one The David Bote Game because of his walk-off, pinch-hit, grand slam last year (that is what comes to mind when I hear “The David Bote Game”), but I think we’re going to remember this one.

With the performance, Bote has the fourth most RBI on the Cubs – just behind the big four of Rizzo, Baez, Bryant, and Contreras – despite some 50 to 80 fewer plate appearances than that crew. Indeed, Bote is in the top 50 in the National League and just two other players in the top 50 in the NL have fewer at bats than Bote’s 149. He is making the most of his opportunities when it comes to driving in runs.

As Bote continues to play so well, he’ll continue to accrue starts in the infield, despite the presence of Addison Russell, who has also played reasonably well. The addition of Carlos Gonzalez, interestingly, could also mean fewer starting opportunities for Bote (by way of Kris Bryant moving to the outfield less), though at least Gonzalez figures to sit against lefties – of course, there are starts for Russell and Albert Almora in those situations, too.

That is all to say, it’s a bit of a crowded picture, but when a guy is performing 25% better than league average at the plate, it’s hard to sit him down too often.