So, that was a hog plop start by Jose Quintana, a fact that doesn’t escape the Cubs or Quintana himself. Maybe that’ll help them get back to the drawing board a bit, because that level of performance really can’t happen too often if the Cubs want to hang onto their now half-game Central lead.

When I started thinking about this back-to-the-drawing-board thing, I immediately thought about the early-season stretch where Quintana looked revitalized and dominant, including the literal best three-game stretch of his career. How do you go from that to what we’ve seen the last six starts?

It isn’t just the results that’ve been bad these last six starts, it’s also virtually all the peripherals: walks are up, strikeouts are down, homers are up, groundballs are down, etc. Something under the hood, so to speak, has been off.

That, in turn got me thinking about what it was that helped him succeed earlier this year. If I can be a little reductive, a couple things we saw a whole lot when he was succeeding: increased changeup usage, and a brilliant four-seam fastball up in the strike zone.

Have those things fallen off?

On the changeup, there has been a decline in usage, from 11.2% before this six-start stretch to just 9.9% in these six starts. That’s not really a HUGE drop, though, and it is instead the drop in effectiveness of the pitch that is more concerning: from a -2.02 runs/100 pitches to -5.42 runs/100 pitches. It’s no surprise that’s happening, either, as the pitch is moving less as the year goes on (Brooks) – the same thing happened last year as Quintana increasingly abandoned the changeup.

So, yeah, that’s all kind of alarming.

But how about the fastball (which we already know is going to be less effective anyway if the changeup isn’t in Quintana’s back pocket as a third pitch to play off the fastball)?

Well, for one thing, Quintana’s seen the good old fashioned drop in velocity, both from year to year (lived near 93 mph in 2017, is now more like 91-92 mph), and this year in-season. Consider that when the season began, we were frequently remarking that he was sitting 93 mph, and given the year to year trend, that was really encouraging. Well, five of his last six starts have featured his lowest average fastball velocity of the season.

How about the fastball command, though? Well, it has slipped. Earlier in the year, dude was filling up the strike zone with the fastball, including a whole lot of up above the belt and away: 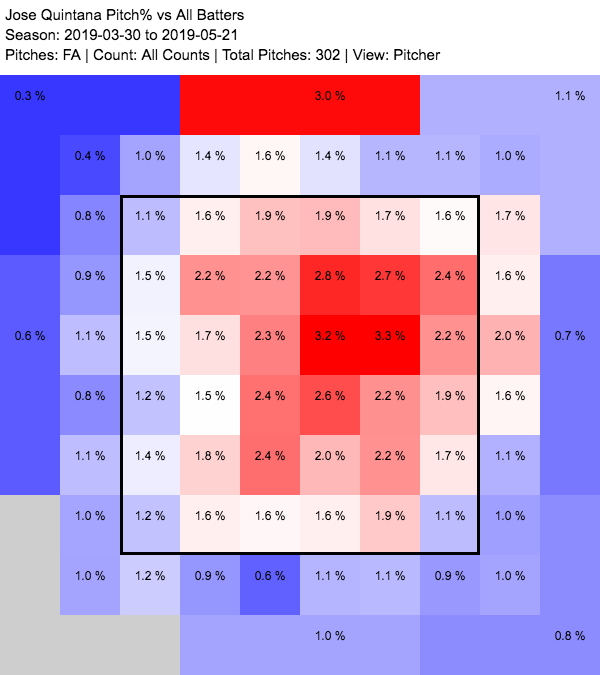 These last six starts, however, he’s just flat missing the zone a lot more, while also seeing a higher proportion of his fastballs in the zone trending down into a meatier spot: 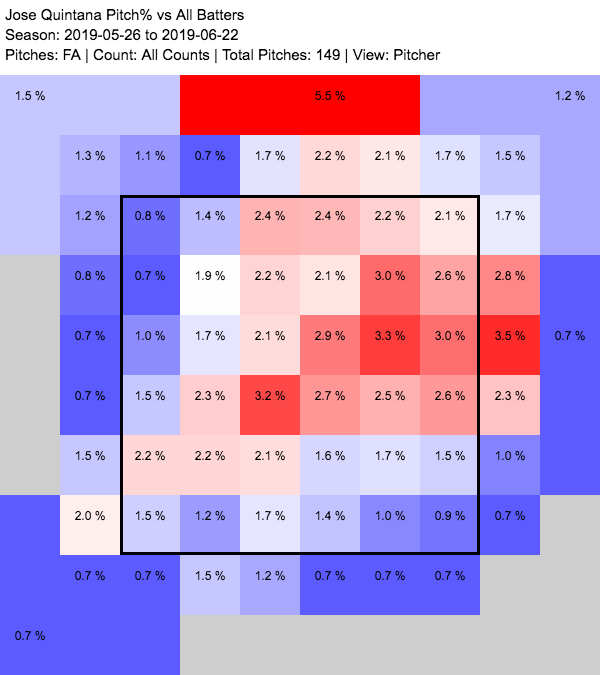 In sum, these last six starts, the things that helped Quintana succeed earlier this year have left him. His changeup has moved less and has been significantly less effective. His fastball velocity has dropped and his command has waned.

As usual, you just have to hope there’s a mechanical fix that can be implemented to stabilize things. I have no doubt the Cubs have been working on it, but as with any pitcher hitting 30, you worry about simple skill deficiencies developing, and a mechanical tweak can’t always overcome that.