Earlier today, Bryan, our absolutely awesome minor league expert, sent me a screen shot of a baseball reference page alongside some text that read: “Ian Happ in last 11, after 2 bombs last night.” Naturally, as the world’s biggest Ian Happ fan, I hearted the text right away and responded “My guy! He’ll be up soon.”

But it was Bryan’s response to my text that really got me thinking: “I just know Brett being away might open the door for you to push mad Ian Happ content!” And you know what? He’s right! Brett is still on vacation with his family, Luis is tied up with Bears content, and Elias is covering the Bulls … there’s no one here to stop me …

… Almost. But we’re getting very close.

When the Cubs first sent Happ down to Triple-A Iowa during Spring Training, I was probably the third angriest person in Chicago (after Happ and his mom). All three of us totally agreed that it was a mistake. But I can admit that I was wrong, because I was. Happ absolutely needed to go to Iowa to work on his swing-and-miss issues, because despite being legitimately able to produce in the big leagues, his ceiling was definitely being capped by all the strikeouts.

And it’s not like he did anything to change our mind immediately upon his demotion (22 Ks in his first 14 games). But Happ has gone through a lot in Iowa and I think he’s nearly ready to return to the big leagues and help out the Chicago Cubs.

But don’t just take my word for it, check out his numbers from his time on the farm, broken into six 15-game chunks: 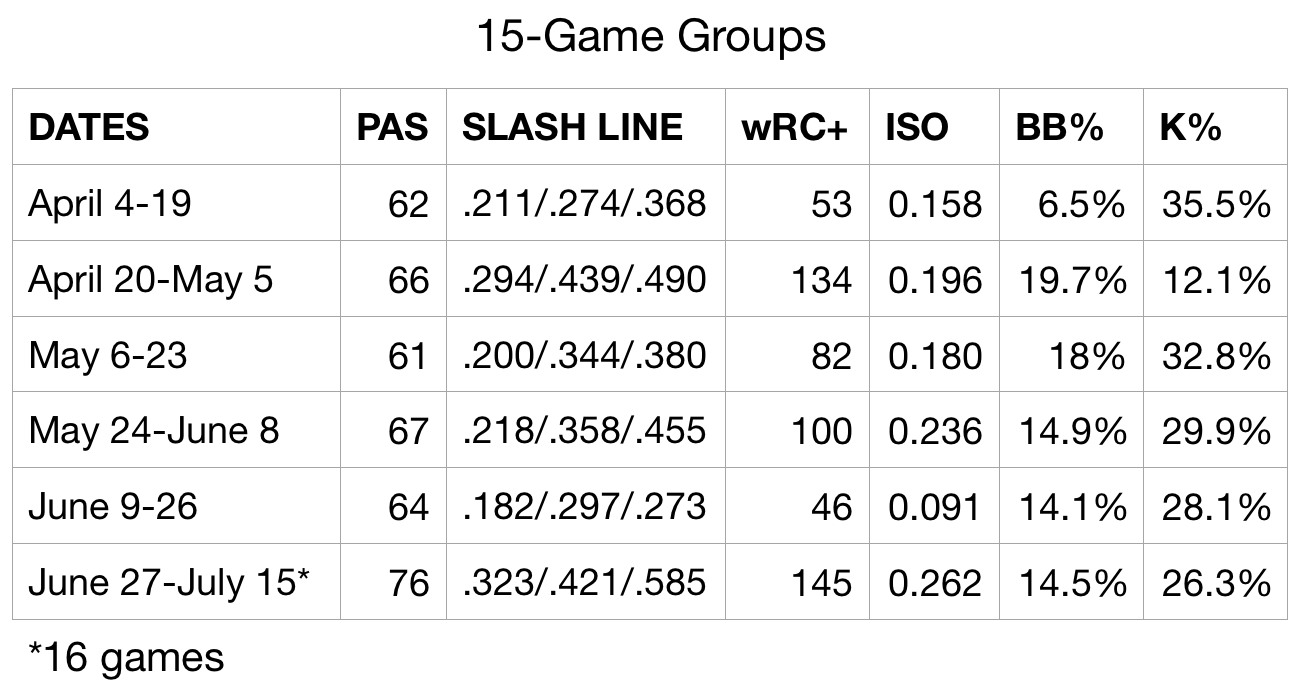 There’s obviously a lot going on here, but let’s narrow our focus and start with his overall offensive production relative to the league (the wRC+ column). As you can see, Happ has yo-yoed between good and bad spurts all season long, drifting as low as 64% worse than the league average hitter to as high as 45% better than league average.

At an absolute minimum, it’s tough to ignore the fact that he’s been straight-up mashing over his last 16 games (76 PA) to the tune of a .323/.421/.585 slash line. Given the way the Cubs bench has gone radio-silent in terms of offensive contributions this season, that, alone, should pique your interest. But that’s just a small (albeit important) part of the bigger story.

Broadly speaking, Happ’s journey in Iowa encourages me more than anything else. Despite maintaining his borderline-elite walk skills pretty much throughout his entire time in Triple-A, you can see how he struggled to balance the power (ISO) and strikeouts. For example, he got his strikeout rate down to 28.1% in the second to last group of games, but had his worst and lowest ISO during that period of time. Meanwhile, in the period of games immediately preceding that stretch, he worked his ISO up to .236, but let his strikeout rate sit nearly 2% points higher, knocking on the door of 30% … in Triple-A.

Which bring us to this last, most dominant stretch of baseball. After bouncing all over the place with his production and peripherals, Happ was able to bring his strikeout rate down to a far more reasonable 26.3% (which is still too high in Iowa, but we’ll take it for now), while improving his isolated power up to its highest rate of the year (.262 ISO).

And that’s thanks, in no small part, to his two homers last night:

Ian Happ homered twice last night. We're sure Twitter has no thoughts about it. pic.twitter.com/Zx9fjoDntM

Given that his batting average over this (admittedly small) sample is up to .323 and he hasn’t let his walks drop either, I mean … we’re pretty clearly getting somewhere. Watching Happ figure out on his own how to balance the different aspects of his game has been huge and I’m willing to bet that process will prove invaluable over the long haul.

Which brings us back to the question of a promotion.

On the strength of his recent performance in Iowa, his past success in the big leagues, his ability to switch hit and play multiple positions of need (second base, center field), as well as the offensive needs of the Cubs, the lackluster performance of the big league bench, and the short term absence of Willson Contreras … yeah, I think there’s a very strong argument to be made in favor of calling him up literally right now.

HOWEVER, I am willing to preach the tiniest bit of patience. Happ has finally begun not only producing, but doing it in a sustainable way after going through the necessary periods of adjustment. He’s also just recently begun getting more time at second base again, which is obviously a need on the big league team. If the Cubs can find a way to give him a couple more weeks in Iowa to *make sure* these changes take hold and to hone his skills at second (or least warm back up to the position), I think they’ll be in a far better position both for the rest of this season and Happ’s career.