Quick Thinking By Dietrich? Yeah, Maybe So - But the Call on Collision with Rizzo Was Wrong Skip to content 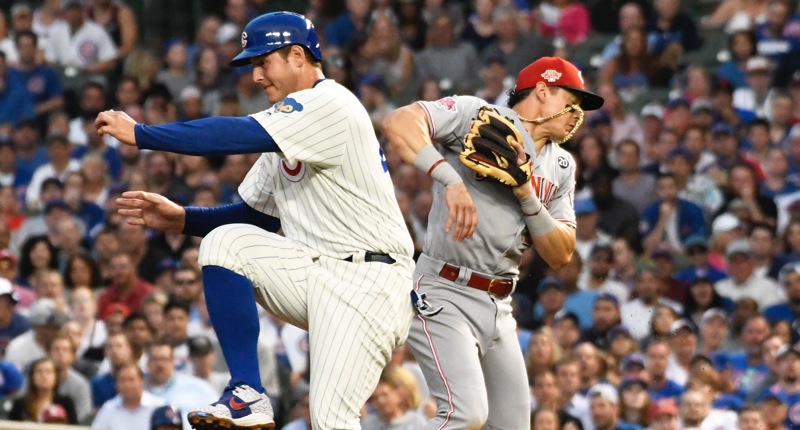 I’m very grateful this winds up being an entirely academic discussion thanks to Kyle Schwarber’s walk-off last night, but I’m still a little chapped.

Resetting the stage: the Cubs looked primed for a run or two in the 4th inning after a Robel Garcia chopper wound up in the outfield, letting Garcia reach second and sending Anthony Rizzo to third with one out. It was bad luck for the Reds, because the ball wasn’t going to be an out at any base, and then Derek Dietrich ran into Rizzo, allowing the ball to reach the outfield.

Except the umpire called obstruction on Rizzo, sending him to the dugout for the second out and sending Garcia back to first:

I had the unfortunate pleasure of watching the Reds broadcast for the game, where they lauded Dietrich’s quick thinking, praising his knowledge of the rules – because it’s true, if a runner impedes your ability to field the ball, whether intentional or not, the runner is out.

… except the big problem here is that the fielder actually has to try to field the ball:

The rule, with the important part highlighted: pic.twitter.com/B8j324ihgv

You get the best replay shots, and the opposition explanation, in the Joe Maddon post-game video:

Once it was clear he was going to have no play, Dietrich pretty clearly made the quick decision to just ram into Rizzo and let the ball go. Credit for quick thinking? Sure. But the ump should have seen where the ball was, and should have seen Dietrich was going for Rizzo, not for the ball. Obviously it’s a split-second call, and not a frequent one, so I can’t be TOO angry at the ump. But, for future reference in these situations, you are reminded that the defender actually has to try to make a play on the ball.