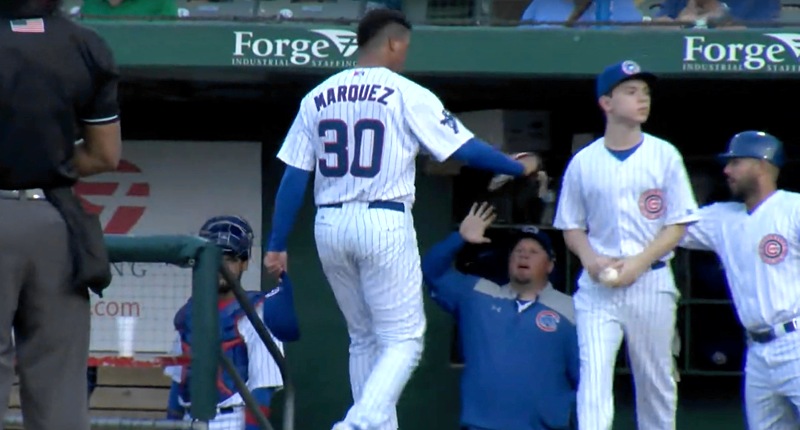 Marquez peaked at 101 mph in the first inning, and held his velocity well, getting strike one to the final batter with 99 mph.

South Bend cruised to a 4-1 victory, with 2018 seventh-round draft pick D.J. Artis coming around to score three times. Marquez’ gem also wouldn’t have been possible without two diving catches from Cole Roederer in the middle innings. You could tell Roederer wanted to try for a third on Marquez’ lone hit allowed – a bloop single – but it fell way too short for Roederer to have a chance on it.

While the six innings matched a season-high for Marquez, the 14 strikeout total decimated his previous career-high of eight. In fact, it was the highest any Cub pitching prospect has had for South Bend since that affiliation started, besting 12 strikeout performances posted by Dylan Cease and Ryan Lawlor.

Marquez threw 71 pitches in total, 53 for strikes. He threw 54 fastballs, including 11 to start the game. In the second inning, Marquez and catcher Eric Gonzalez mixed in two-strike sliders, getting all three second-inning strikeouts with the breaking ball. Incredibly, Marquez drew 24 swinging strikes in the game, twenty with the heater and four with well-placed sliders. More than one in three pitches was a whiff. Incredible.

On June 7, Marquez was not able to make it out of the second inning, getting chased after allowing five hits and three walks. His season ERA was pushing five; a baffling number for one of the planet’s hardest throwers in Low-A. But Marquez had seen his walk rate double this year, his BABIP was .378, and a fair number of balls were clearing the fence. Since then, he’s been his best self: 30.1 IP, 24 H, 2.67 ERA, 15 BB, 42 K.

Early in the season, I expressed some frustration that the 20-year-old southpaw was messing too much with secondary pitches: a low 90s two-seam fastball, his breaking ball that seemed to have two variations, a change-up. Yes, I know Low-A is about development, and yes, I’m always about young hurlers building up their offspeed arsenals, but with Brailyn it felt wrong. Let the four-seam eat. Yesterday was proof that it’s enough.

He threw a first-pitch fastball to every hitter. The vast majority of pitches were thrown at the arm-side corner (away to a RHH), and the majority beyond that were up in the zone. The sliders he threw were in very obvious breaking ball counts. It just didn’t matter. It was one of those nights that he could tell the batter what was coming, and they couldn’t hit it anyway.

I felt particularly bad for Bo Naylor, the Indians first-round pick in 2018, and the lone left-handed hitter in Lake County’s lineup. He faced Marquez twice and struck out two times on eight pitches. He was responsible for five of the swings and misses. In even this up-and-down season for Marquez, he has destroyed LHH’s to a comical degree: .113/.263/.161. When you hear people ready to put Marquez in the bullpen, that stat line will only provide ammunition for their argument.

But the Cubs don’t see it that way. They see the highest ceiling pitching prospect this organization has had in more than a decade. They see a man who can throw 100 deep into any start. Last night, everything the Cubs dream about was on display. Let’s hope we get an up-close look at that ceiling more often going forward. It sure was fun.