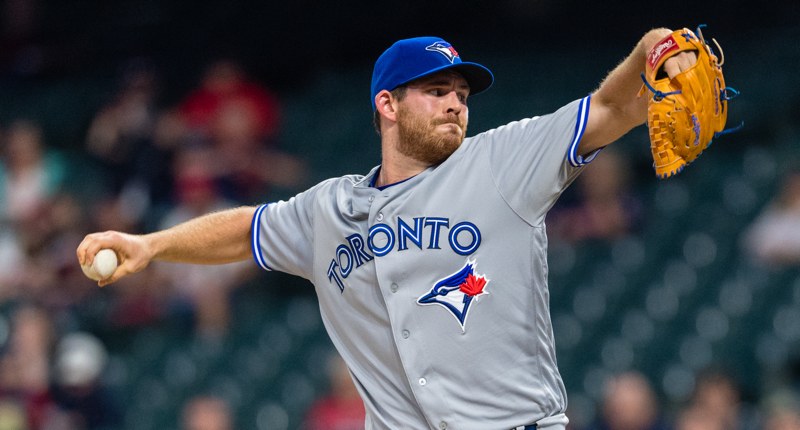 As you explore rosters for the purposes of mulling possible trades, you wind up coming across guys you’ve only heard about in passing and think, “Hey, that guy kinda makes some sense.”

I was cruising the Blue Jays’ roster earlier today, given that they’re the one team actually starting to sell useful pieces, and instead of focusing on the relievers we always hear about – Ken Giles and Daniel Hudson, for example – I started to wonder about Joe Biagini.

The 29-year-old righty is not an elite setup guy, and is far from a household name. He does not have a long track record of success, and he’s not a lock to turn some portion of your bullpen around. But what he is: (1) inexpensive ($900K this year), (2) controlled for three more arbitration years, (3) good performance (more in a moment), and, most importantly for this week, (4) probably available. Ken Rosenthal reports today that the Braves’ talks with the Blue Jays for a reliever are not about Giles or Hudson, but are instead about Biagini. Maybe those talks are too far advanced for anyone else to swoop in, but there’s a lot to like about Biagini for the Cubs.

First, because he’s not expensive this year in salary, the Cubs can actually afford to add him without having to artificially increase their prospect cost to get the other team to eat salary. Sucks that it’s a consideration, but it is.

Second, he’s posting a 3.75 ERA this year (18% better than league average), with a very nice 23.7%/7.9% K/BB rate set, a good 45.3% groundball rate, and a fine 36.2% hard contact rate. The only thing that’s burned him is the long ball, but man, I don’t see a good reason for his elevated 21.1% HR/FB rate this year. I think maybe he’s been unlucky: 6 of the 8 homers have come at the Rogers Centre, where the ball has really been flying – so much that it’s park factor for homers is far and away the highest in baseball.

Third, the Blue Jays tried to make him a starting pitcher in 2017, and it failed miserably – he didn’t really seem to get his footing as a reliever until this year. He could have even more potential to the right organization with the right pitching infrastructure.

Fourth, Biagini started incorporating a cutter much more this year, and it’s been fantastic for him.

I think this guy is actually, quietly, really good!

Here’s the catch (it’s not good, but it’s a catch that would also bring down the price): he is getting hammered by lefties this year, to the tune of a .274/.329/.616, with 7 of his 8 homers coming against lefties. He has absolutely rocked righties. Lefties have owned him.

HOWEVA, most of that damage from lefties, again, has come in the form of slugging at the Rogers Centre. Maybe something wonky is going on there, and – like Jesse Chavez and Arlington last year – you take him out, and boom, he’s a dude.

Even if he’s not, you’re talking about a guy who hasn’t fully established himself, will be very cheap in arbitration the next three years, and owns righties. You don’t want to add that guy to the pen?

Because of the team control, even at age 29, Biagini probably costs you a pretty decent prospect/big league piece to get a deal done. Not sure of the fit with the Cubs – I have no specific visibility to what the Blue Jays would want. I’m just saying, I see a guy who could be really good with another team, and fits the Cubs’ roster/payroll very well.