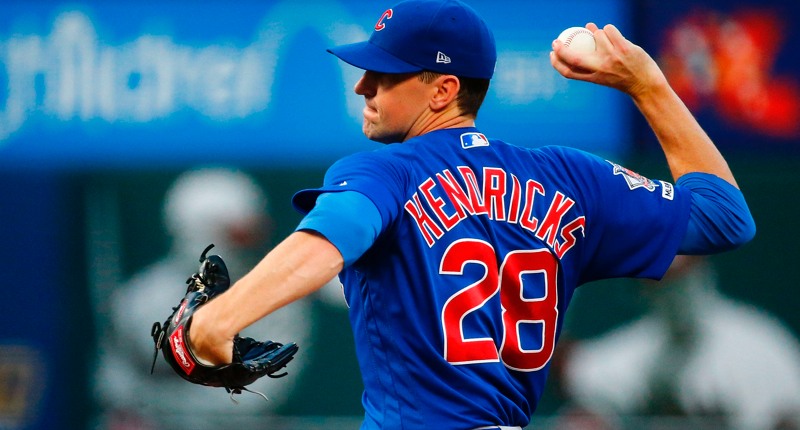 Last night, Kyle Hendricks tossed seven scoreless innings against the Cardinals, allowing 7 hits and no walks, while striking out 7. It was a great performance.

In fact, the worst thing you can say about his night is that he allowed four doubles (Paul Goldschmidt (x2), Dexter Fowler, and Matt Wieters), but with a ridiculously high 52.4% soft-hit rate and wonderfully low 19.1% hard-hit rate, I don’t think there’s any confusion over who was in control of the game.

Hendricks had their number all night long, and it was a thing of beauty:

In his journey to seven strikeouts last night, Kyle Hendricks got 17(!) swings and misses in total – that 15.4% whiff rate is his second highest in any one outing this season and higher than all but two starts last year. In fact, it was the 7th highest whiff rate of his entire 152-start career. That’s huge. And like I already mentioned, he was getting a ton of weak contact, too.

Throw in the fact that he walked exactly nobody and you have the recipe for one magnificent start against the Cubs biggest rivals in their home ballpark in the middle of an extremely tight playoff race. But it’s hardly the first time he’s dominated them.

In fact, that’s kind of his thing:

Hendricks has faced the Cardinals three times this season, and each start has been absolutely brilliant:

I mean, that is just beautiful, right? Especially the total lack of walks over 23 innings pitched. I know command is Hendricks’ thing, but come on. Of course, this isn’t limited to just this season. Hendricks has absolutely squashed the Cardinals to the tune of a 2.09 ERA and 11 straight Cubs wins!

Kyle Hendricks has a 2.09 ERA over his last 11 starts vs the Cardinals …

The @Cubs have won all 11 of those games. pic.twitter.com/ePt2Hw8OWj

Asked how he’s been able to so effectively and consistently dominate the Cubs biggest rivals year in and year out, Kyle Hendricks shrugged and said “I don’t know. Nothing in particular.” Which … LOL. That’s just so very him.

When he got down to it, though, Hendricks cited a better feel for his changeup – he actually said it was “probably the best” he’s felt with it all year, which certainly tracks with the 10(!) whiffs he got on it last night and our general understanding of how and when he best succeeds.

In any case, that was another magnificent outing for The Professor – and it was exactly what this (offensively slumping) team needed.