Jon Lester Got Blown Up Last Night ... And, Well, It Happens Skip to content 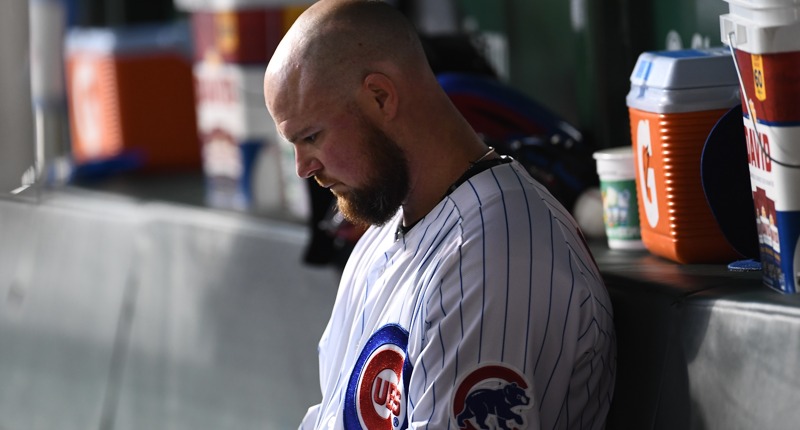 Jon Lester was blown the F up last night, to the tune of 10 earned runs (11 total) on 10 hits, 3 walks, and 6 strikeouts in just 4.0 IP. I suppose it’s unfair to put those last few runs on him, when he was held out there solely to save the bullpen a couple more innings (which he did), but I also don’t think that’s credit he would happily accept. He’s just that kind of guy.

In fact, if anything, I’d say he was downright too hard on himself (Cubs.com): “When it comes down to it, the injuries are the injuries, but I’m pretty much the weakest link in the rotation right now. I’ve got to figure out a way to right that ship, pick my end up, do better – flat out do better.”

For what it’s worth, I don’t think it’s fair to just think of Lester as the weakest link in this rotation. I mean, two starts ago he held the Brewers scoreless over 7.0 crucial innings in Milwaukee. Though he does have the highest ERA (4.46) and second-highest FIP (4.15) overall in the rotation, it doesn’t really matter, right? This isn’t the point of this post, but Lester is delivering about exactly as much as we expected at this point in his career: 30+ starts overall with very few bad ones, a lot of a good ones, and some great ones. And when October rolls around, there’s not another starter I want on the roster. He’s fine, last night notwithstanding.

In one way, this is something we saw coming in the Series Preview, when I pointed out the A’s unusually large lefty/righty splits this season (with respect to their lucky draw of Lester and Quintana in one 3-game series).

But there was probably another way to guess such a clunker was around the corner … and that’s just by taking a little peak at history. If you recall, Jon Lester originally signed with the Cubs before the 2015 season, and here is a list of the most earned runs he’s given up in an outing – with dates notably included:

Six of Lester’s eight worst starts (by total earned runs) have come between roughly mid-July to mid-August. Now, I’m not suggesting that we should have seen it coming last night specifically, let alone in any one start (the splits were probably a greater tip off for that). But presence of the clunker, itself, was completely expected once it arrived.

It’s just kinda something that seems to happen with Lester.

That’s mostly why, when it happened, I wasn’t even particularly concerned *about Lester* because we’ve seen this from him so many times before. Just like when a pitcher routinely experiences “dead arm” every year in Spring Training to no ultimate long-term negative effects, last night was a crappy, but expected part of Lester’s season/career.

He got hit hard, he got blown up, he stayed in there and took his lumps. And next time out, there is no particular reason to believe there will be an after-effect. This is Jon Freakin’ Lester we’re talking about. So take that game, crumple it up, and throw it out. I know I will. So will he.