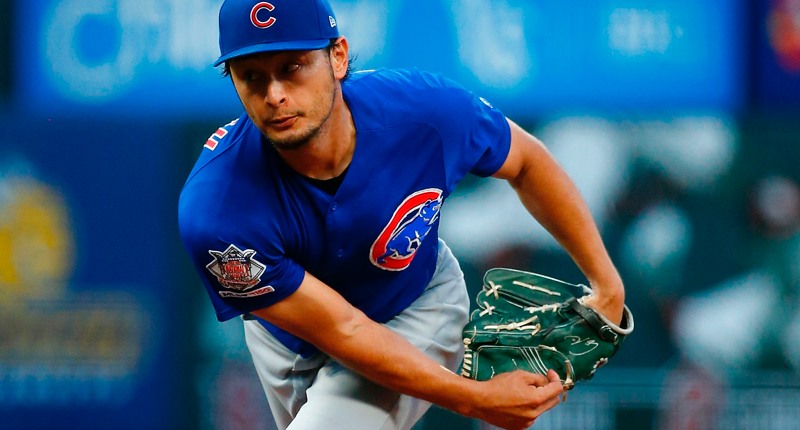 While every big league start is unique, it’s both natural and common to lump certain type outings together (a gem, a dud, a quality start, a gutsy performance, whatever). But I’m not quite sure in which bucket I’m supposed to dump Yu Darvish’s latest outing with the Cubs.

Over the course of 5.1 innings at Wrigley Field, Darvish struck out 8 Giants and walked exactly no one … while also allowing 7 runs (6 earned) on 7 hits and four homers. Is that good? No. Was he dominating? Yeah, kind of. Am I happy with the outcome? Obviously not.

When you get into the numbers, it’s not particularly hard to see what went wrong: Yu Darvish – rolling through an incredible streak of elite command – was in the zone way too often and the Giants were all over him for it. His premium velocity, command, and movement generated a ton of whiffs, many of which led to strikeouts (which look sexy), but, well … when you get nothing but pitches in the zone in the middle of the juiced ball era, baseballs are going to start leaving the yard, especially if you’re able to sit back on certain pitches with two strikes. And that’s exactly what’s happened.

That’s also why this start/stretch is so hard to define. On the one hand, I want to praise Darvish for reaching five straight outings without issuing a single walk (he has just 2 walks in his last NINE games overall), while striking out another 8 batters. But on the other hand, it really wasn’t working, and the homers have been an issue all season.

Listed below are the five starts in which Darvish was in the strike zone most often this year. And as you can see, while he might be successfully limiting free passes with this approach, it doesn’t exactly mean he’s succeeding:

Now, I’m obviously not advocating a change to whatever it is that’s generated so much success since the middle of June, really, but I do think it’s at least possible that he’s over-corrected his command issues. Darvish shouldn’t throw every pitch for a strike just because he can. There’s an art to it. A balance. And hopefully tonight, he can strike that balance against the Mets (and hopefully they don’t have as good of a plan of attack as the Giants did).

Don’t get me wrong. I’d love to see Darvish get through the first inning without giving up a walk to take sole ownership of the longest MLB walkless streak of the season, as Jesse Rogers points out at ESPN. But I’d actually prefer he just do whatever it took to win the game – and I’m not necessarily convinced (after his last start and those other four starts above) that keeping it in the strike zone all night is really the best path forward.

This all just feels so strange to say, doesn’t it? After all, Darvish has the look of a guy who’s dominating. I mean, you don’t go on a 98/7 strikeout/walk spree over 13 starts on accident or by chance. You have to be a filthy, filthy man to make that happen.

But as we’ve seen in more than just his last start, a couple homers can kill even the most dominant of outings. And this season, the long ball has clearly done that to Darvish.

Since the start of the season, Yu Darvish has allowed the fourth most home runs per nine innings in all of baseball at 1.87. But since the start of this dominant strikeout/walk run (last 13 starts), that number is all the way up to 2.19. That simply has to change. Fortunately, the Mets might be a good matchup. For one, they’re just around the middle of the pack in overall home runs this season (184, 16th). And for another, they collectively swing at more pitches out of the zone (33.4%) than all but four other MLB teams.

Darvish might have that walkless streak on the mind when he takes the mound tonight, but he – and the Cubs – might be best served by a less aggressive approach in the zone. After all, winning the game is far more important, and you can’t do that consistently when you allow multiple home runs per game.

Also: Yu Darvish is the man and what he’s done has been freakin’ awesome. He’s very close to striking the sort of balance that will make him a true ace again. It can happen, and the Cubs need it.