Yu Darvish's Walk-Less Streak Came to an End, But He Was Just as Awesome as Ever Skip to content 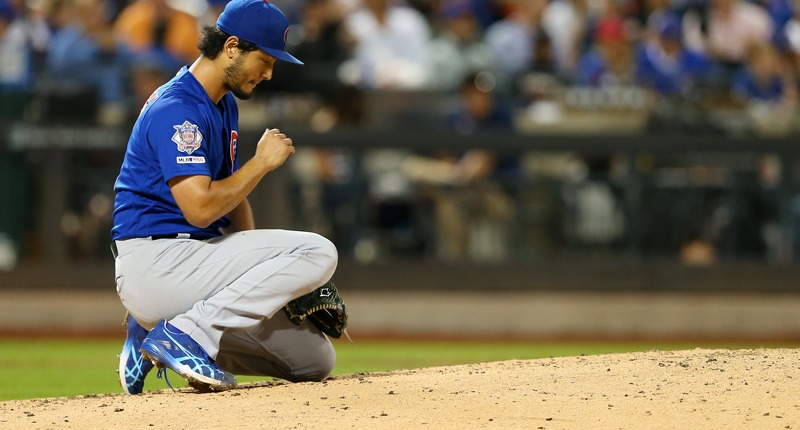 Yu Darvish made it another four full innings last night before giving up a walk, which brought his existing walk-less streak to a staggering 142 consecutive batters – the longest streak of its kind in the big leagues this season.

Oh, and the Cubs eventually won the game, too. I feel like I have to bring that up, since Darvish was starting and they so often abandon him out there this season.

But on that walk … Darvish was apparently “so sad about” it last night after the game (joking?), but, of course, he had no reason to be. That was his only free pass of the evening, which means he’s still doing some pretty special things in that department:

Yu Darvish hasn't thrown more than one walk in a single start since JUNE. The month. The month that was two months ago. That's how long.

Darvish did allow another home run last night (something we’ve talked about at lot), but it was the only run he allowed over his 8.0 full innings of work, that featured the one walk and just five other hits against seven strikeouts. It was his longest outing with the Cubs.

Put another way, HE WAS GOOD:

Drilling down into the nuts and bolts of last night’s outing reveals a whole host of compelling topics, many of which are covered by Jordan Bastian right here – like Darvish conceding that David Kaplan may have been onto something last week (I’m sure he won’t be bragging about that one on air today) or the fact that Craig Kimbrel taught him how to throw his knuckle curve, which leaves Darvish with exactly one billion different pitches in his arsenal.

But the thing I was so anxious to check in on was the very thing we wrote about yesterday: throwing fewer pitches in the zone.

In case you missed my post about Darvish yesterday, I basically suggested that, although the walk-less streak had been insane, impressive, and insanely impressive, Darvish might be focusing on preserving it a bit too much – and understandably so (given his extreme command issues at the beginning of the season, who wouldn’t want to overcorrect?). The unintended consequences, however, was a disproportionate number of home runs.

Since the start of the season, Yu Darvish has allowed the fourth most home runs per nine innings in all of baseball at 1.87. But since the start of this dominant strikeout/walk run (last 13 starts), that number is all the way up to 2.19. That simply has to change.

In fact, his last four starts, including last night, are a perfect little snapshot of the broader hypothesis, I think:

None of this is as simple as staying out of the zone, but I think we can agree that with his velocity and stuff, Darvish doesn’t need to be in the strike zone over 50% of the time, when the league average is 42.1%. Last night, he wasn’t, and it seemed to work just fine – the Mets were swinging at everything and either striking out, grounding out, or failing to make hard enough contact.

In any case, Yu Darvish has now made 9 starts since the All-Star break, and despite an outing with six earned runs just two starts back, his second-half numbers are marvelous: 2.93 ERA, 3.62 FIP; 33.6% strikeout rate, 1.4% walk rate.

Yu Darvish has allowed only 19 runs since the All-Star break, but 15 of those were scored on home runs.