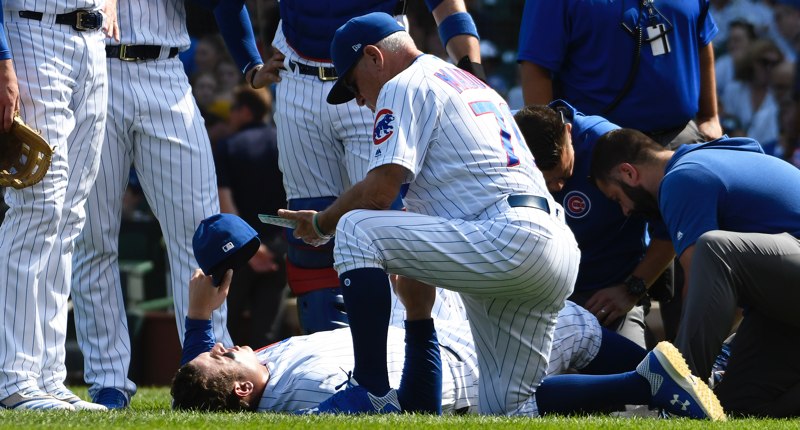 The news on Anthony Rizzo’s ankle is not good, but, so far, it could be worse

Rizzo MRI revealed lateral right ankle sorain. No surgery needed. In boot 5-7 days. To be further evaluated after that.

I do think that it would be unreasonable to expect Rizzo could play ball right out of the boot, so the most likely scenario at this point – at best – is still that Rizzo misses the rest of the regular season and, like Javy Baez (thumb fracture), could HOPEFULLY return for some part of the postseason.

Rizzo’s injury – like Baez’s and Craig Kimbrel’s (and the myriad that came before them – will undoubtedly be a part of the story of how this Cubs season ends. That is a huge bat and a huge glove to replace, and a guy who was FINALLY answering the Cubs’ question at the top of the lineup.

This hurts the Cubs’ chances of winning going forward. There can be no debate about that.

However, you never know if there will be some small galvanizing factor involved in seeing two of the Cubs’ heartbeat players – Rizzo and Baez – go down. How will the rest of the team come together and step up? I don’t believe they will magically be better without some of their best players, but I’m wondering if maybe they can still be pretty darn good.

Like today, we’ll see a fair bit of Victor Caratini and Willson Contreras both finding their way into the lineup now that Rizzo is out, plus Ian Happ will fill time at first base.

At the top of the order, when Ben Zobrist plays, he figures to be the regular leadoff hitter, at least against all righties. There might be some mixing and matching otherwise, but there are already a host of guys who are pretty clearly not going to be comfortable atop the order. Heck, that’s where the loss of Rizzo might be felt most acutely.

UPDATE: A little from Rizzo himself: