Kimbrel's Bad Pitch and Margin for Error, Hoerner's Bad Luck, Replay Whatever, and Other Cubs Bullets Skip to content 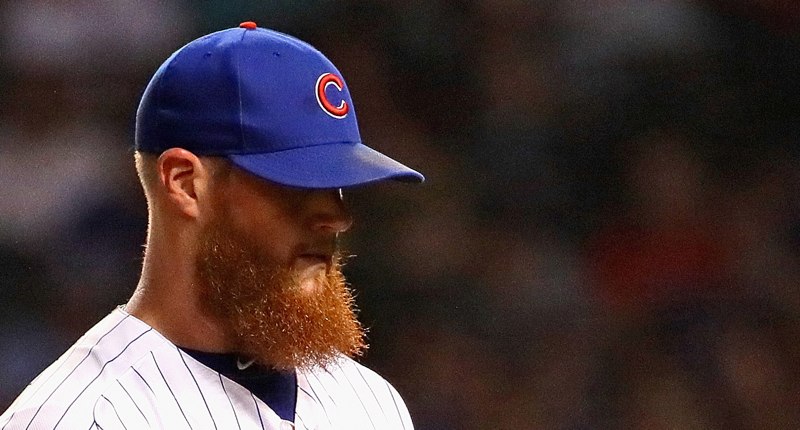 Spilled coffee on my shirt – just dead center, right on my chest – and it is large, glaring, and awful. But I’m out and about writing, then with a doctor’s appointment and then an exercise class, so I can’t really do much about it until much later today. Just have to plow through it. Now I know how Anthony Rizzo felt getting out there last night with his ankle. I wouldn’t call myself a hero, but I wouldn’t argue with anyone who sees it that way.

Kimbrel: Pretty disappointed in myself to go out there and give up a home run like that. Tonight was a big game, we really needed it. Season’s not over, we got a lot of games left. But it definitely would have helped. Wish I would have pitched a little better.

Baseball is a cruel game.

Hey @MLBUA, how is pitch 8 a strike. This is horrible pic.twitter.com/yPqW89yMFQ

This is the point at which Rizzo's glove first makes contact. Wong isn't even close to the bag yet. How do they keep screwing these things up? pic.twitter.com/Kfg23OCS56

#Brewers have minus-21 run differential for season. Cubs are plus-114. Yet, #Brewers now have one game lead over Cubs for second wild-card spot. As always, most important stat is wins-losses.

The best MLB starters tend to share a trait: they get swing and miss on their fastballs and get that miss in-zone (and they have different velo levels) via @baseballpro leaderboards pic.twitter.com/a1RZVE8VLY

Don Mattingly's two-year contract extension as Miami Marlins manager may look like a shocker considering the club's record. Management believes he has extracted the best out of a bad situation and can help transition young position-playing talent to complement plenty of pitching.

Royals pitcher Mike Montgomery, who was ejected for the first time in his career, was not happy with home plate umpire Manny Gonzalez after the game. pic.twitter.com/je3L9caG36

Here's @daynperry to give you some hope for the future:https://t.co/96wUPNQ5rx

Love the work by @ByRobertMurray, and a huge congrats to Taylor. What he accomplished is awesome.

But the league – and the Brewers – should absolutely be *embarrassed* by stories like this, not celebrated.

More excited to share this piece with everyone than any other I’ve written this season. Cory Abbott had the best 2019 of any Cubs minor leaguer, and @Cabbott40 was kind enough to get in the weeds with me about how he grinded through Double-A. Read!https://t.co/gKvboM9Iel