Nick Castellanos on Whether He'd Like to Be Back with the Cubs Next Year: "What Do You Think?" Skip to content 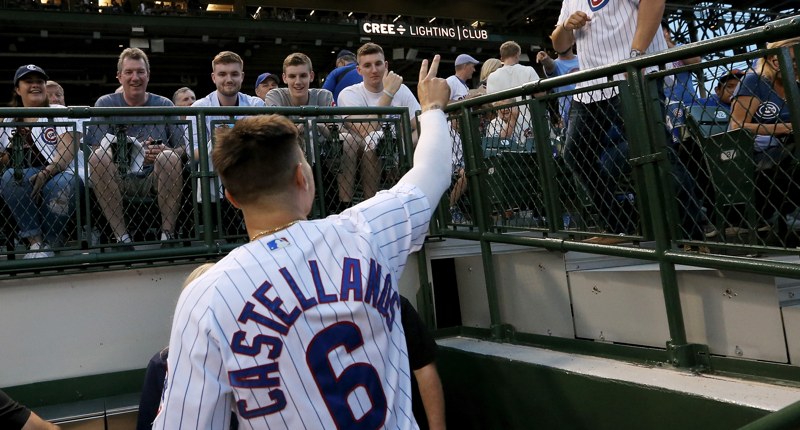 One of the quiet bummers of the final series in St. Louis is that Nick Castellanos, one of the best Trade Deadline acquisitions by any club in recent member, was not able to play because of a groin issue.

Not only did that leave his quest to get to a remarkable 60 doubles unfulfilled, it cemented his final line with the Cubs at .321/.356/.646, with a 154 wRC+ and an impressive 2.0 WAR in just two months of work. He’ll be remembered fondly by Cubs fans regardless of what happens next.

But what does happen next?

We’ve gone over the trickiness in evaluating an appropriate contract for the 27-year-old free agent outfielder, but before that even matters, you’ve gotta know that a guy does want to return, right?

Well, for that part, you can definitely tell that Castellanos would be happy to stick with the Cubs. Get a load of how he responded when asked about whether he’d like to return:

When asked if he’d like to be back with Cubs, Nick Castellanos replied: “What do you think?”

Said the past two months with Chicago taught him a lot about himself. Raved about Cubs fans and the talent in the room. Felt the heightened pressure/expectations brought best out of him.

What do *I* think? I think the Cubs should very much consider how Castellanos could fit into the future with this club, and at a minimum should stay involved in his free agent talks until/unless it becomes clear he’s somehow going to get up into that five-year, $90+ million range.

A couple great months in a city with a team and its fans only buys you so much goodwill, but dang, man, I’m just saying it seems like the Cubs already do have a solid foot in the door.

“Let’s see what happens,” Castellanos told the Tribune of what comes next. “I loved the fans here. Being able to walk to and from the park, just seeing how much they genuinely love the Cubs, whether we’re winning by 10 or losing by 10. They love their Cubs, and I think it’s awesome. It’s great. It’s pure. And it was a lot of fun to be a part of that.”

It’s also worth remember, here at the outset of the offseason, that Castellanos is a philosophical guy, driven perhaps more by considerations beyond just money, though obviously he should absolutely try to get PAID. Yes, there are questions about the defense, but he improved a bit in the outfield this year (just his second as an outfielder), and since 2016, he’s a .286/.336/.504, 121 wRC+ hitter. There should be a good contract out there for him.

But even when he does get PAID, he’s not gonna stop being a balls-out player.

“Wherever I end up, it’s going to be a with a team that really wants me,” Castellanos told the Sun-Times. “That’s the No. 1 thing that I want just as a baseball player, is to want to be wanted, to want to feel loved and appreciated. And the more that somebody believes in me, the harder I’m going to go for that person — to show them that they made the [bleeping] right decision.”

Castellanos will officially be a free agent as soon as the World Series ends.