Cardinals Swept Out of NLCS, Nationals Go Off in the First, Then Troll the Heck Out of Bryce Harper | Bleacher Nation Skip to content 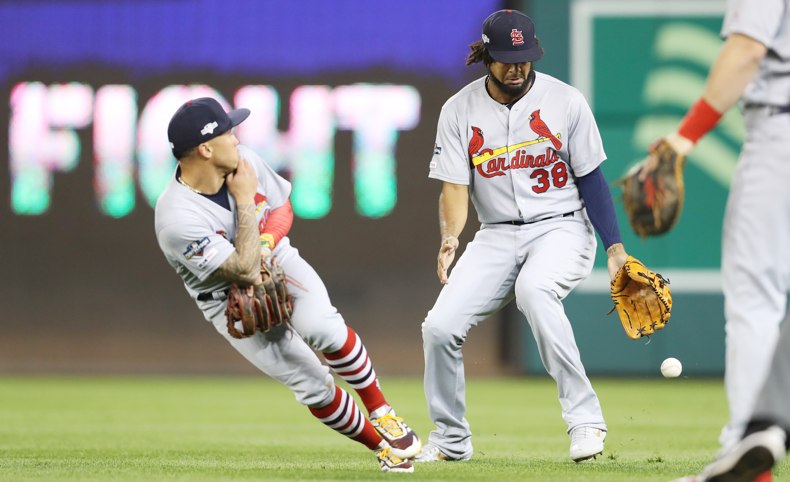 There’s only so much satisfaction you can get out of watching a hated rival get swept out of a postseason series that you wish your own beloved team were actually playing in.

HOWEVA, when it’s an absolutely embarrassing, non-competitive, domination of a sweep? Well, it’s hard not to get just a touch more satisfaction.

And although the Cardinals did score enough to make last night a bit of a game, this is what happened in the very first inning to give the Nationals the only runs they’d need to finish off the sweep (after Cardinals batters struck out three times in a row to open the top of the first):

Full Nationals first inning against the Cardinals, in the NLCS, which they lead 3-0:

2 of 3 outs were sacrifices. Nats score 7 runs in the first.

As it turned out, that was enough. Moreover, that inning wasn’t solely the Nationals blistering the Cardinals – it was a lotta screwing up by a Cardinals defense that had otherwise been great this year.

So, the Cardinals go home having won as many NLCS games this year as the Cubs, and the Nationals are now our second favorite team, since they took out the Brewers, Dodgers, and Cardinals all in the same postseason. Also, love to see Dave Martinez and Henry Blanco get to the World Series with their new club. Good on them.

As the Nationals head to the World Series for the first time in their history, they aren’t forgetting those who came before … by trolling the former face of the franchise mercilessly on Twitter.

If you’re not familiar, when Bryce Harper departed the Nationals for the NL East-rival Phillies, he inadvertently slipped in his introductory press conference:

"We wanna bring a title back to DC." –Bryce Harper, first day as a Philadelphia Phillie. pic.twitter.com/NwyqGTJlD6

Nobody has let him forget that since March, and that apparently includes the Nationals, who put out this massive troll job of a video:

I definitely dig sports pettiness, obviously, but that seems a bit much unless there are actual bitter feelings. It’s not like Harper didn’t want to win with the Nationals, and it isn’t unfair that he didn’t want to sign a deal that had money deferred into the next millennium.