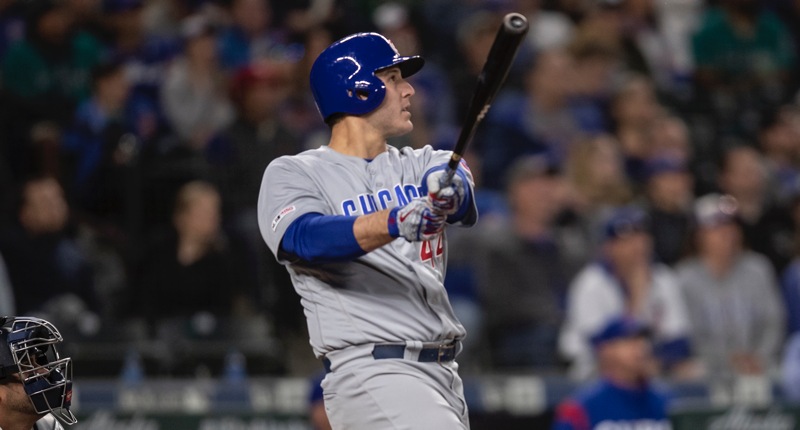 Just a little postscript here to the weird buzz this week about the Cubs and Anthony Rizzo not engaging in extension talks right now, except also they kinda sorta did a little bit?

If you missed it, the gist was that it seemed Rizzo and his agent wanted to have extension talks with the Cubs (he’s two years away from free agency), but their initial high-level conversations indicated it wasn’t going to be a match right now, so the Cubs tabled the discussions. From there, Rizzo’s agent sent a statement to ESPN saying the Cubs “will not be offering Anthony an extension at this time,” which is a little bit of agent-speak, and everything kinda snowballed from there.

If you’re concerned, though, that it means the Cubs don’t want Anthony Rizzo to be a Cub for Life, as pretty much all fans want, don’t freak out yet. As an older (compared to others in the core) player at a non-premium position who is under contract via options (as opposed to arbitration) for the next two years, it makes sense that there’s less urgency about a deal than for a guy like Javy Baez. That’s really all this is. Epstein has indicated that there will be talks with Rizzo, and he knows how intimately connected Rizzo is with the entire Cubs organization right now in the minds of fans.

What I found interesting in Epstein’s comments about the situation (you can see them here and here, among other places), though, is how he repeatedly talked about “length” as being what put a kibosh on the early talks.

“We talk to our players and representatives at times about these things,” Epstein said, per 670 The Score. “Usually when there is common ground on length or chance on common ground on length, then it can move forward, get more specific and sometimes there is an offer. The fact that in a given situation (if) there wasn’t an offer made, there were not deeper conversations. That means there was no common ground on length. This is not uncommon when a player is more than a year away from free agency ….

“The way I look at him is he is a special player. He has done so much for the organization and the city. We value him very, very highly. We think highly of him as a person, and he is closely associated with our team and our brand. He is not a free agent. He isn’t going anywhere right now. He is under control for two more years, and we are thrilled about it. There will be lots of opportunities to talk about continuing the relationship. There can be more conversations on the length, and that is more typical when you get closer to free agency.”

Implicit there is an idea that, if you aren’t even remotely in the same range on length when you start out talks, then there’s not really much point in negotiating annual value, because the length of a deal is where the total guarantee is going to change dramatically. You might be 20 or 30% apart in your negotiations on annual value ($23 million or $27 million?), but you could easily be upwards of 100% apart in your negotiations on length (4 years or 8 years?). I’d never thought about it this way, but it does make sense for the length to be kind of your first screening filter in these talks.

That’s especially true, as Epstein points out, when a guy is still two years away from free agency and is on a locked-in contract. You’re baking in two years already before the new part of the deal kicks in, so the length probably feels like an even bigger potential hurdle.

So, what to make of this in the particular case of Anthony Rizzo? Only that Rizzo’s agent came to the table with some thoughts on length that dramatically outpaced what the Cubs were thinking. Paul Goldschmidt just got a five-year extension tacked onto his one year under control, with the total six years covering his age 31 through 36 seasons.

It’s not hard to imagine Rizzo’s camp using that as a baseline, noting that Rizzo is a year younger, and then also asking for a five-year extension – onto the current two years of control – that would also cover Rizzo through his age 36 season (seven years total from now). Or maybe Rizzo’s camp asked for an additional year to top Goldschmidt’s deal, at which point you’re talking about a new contract that covers eight seasons starting in 2020. That wouldn’t be an absolutely crazy ask – markets move! – but it would be an *example* length that would understandably give the Cubs pause.

In the end, it seems unlikely the sides will engage in serious talks this offseason, but you never know if things will pick back up in-season or after next year. Rizzo has had back issues, and doesn’t always look like the body profile that ages well – but he has also generally been exceptionally healthy, is a beast, has the kind of plate skillset that does age well, and plays a position where aging curves are kinda baked in.