Yankees Reportedly Have Interest in Kyle Schwarber, But-But-But a Trade is Very Unlikely Skip to content 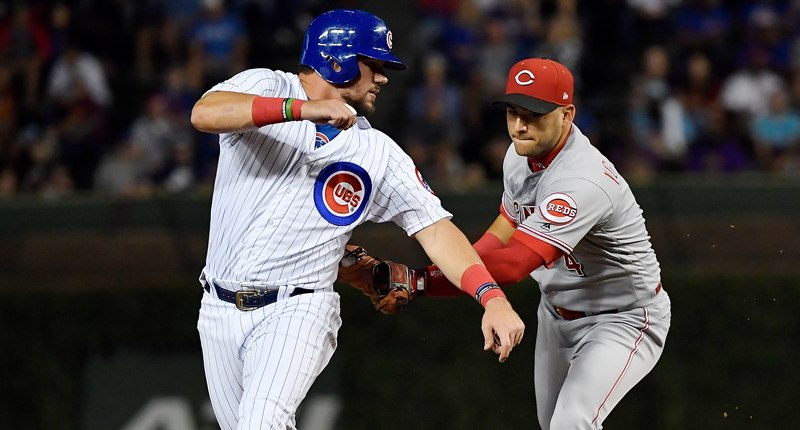 Even if Ken Rosenthal – with contributions from Patrick Mooney and Sahadev Sharma – hadn’t thrown out fifty layers of admonitions about not taking this information too far from what it actually is, I would have done the same right up at the top of this one.

Yes, strictly speaking, Rosenthal is writing about the Yankees possibly being interest in a trade for Kyle Schwarber to beef up their left-handed power, but he’s *MOSTLY* just using that as a vehicle to discuss the Yankees’ and Cubs’ situations. In other words, he’s not quite out there reporting aggressively that the Yankees are trying to land Schwarber or that the Cubs are trying to trade him.

Again, read it and take from it what you will, but if you go much further than (1) the Yankees would like a big lefty bat like Schwarber’s, and (2) the Cubs are willing to trade anyone, then you’re probably freaking out – right now – for no reason.

We already know both of those things. Sure, Rosenthal adds the additional layer of actual interest there from the Yankees, but again, that was more or less already known, too. For years! Heck, there was a trade suggestion out of New York just last month that had Schwarber going to the Yankees for Miguel Andujar.

When you throw in all the words of caution from Rosenthal that there is no momentum toward a trade (with a note at the end of the article that Mooney and Sharma contributed), I really just think you shouldn’t take too much from this right now.

Ultimately, among the tradable Cubs, Schwarber is fairly far down on the list of sensible candidates. The caveat for any player is that if he nets a haul, you consider it, but Schwarber is probably not going to be that guy. Not only is he under control for only two more years, but he’ll make upwards of $8 million in arbitration next year – a steal if he’s the guy he was in the second half last year (just about one of the 10 best hitters in baseball, with all the peripherals to match), but if he settles back into being a merely good bat and a slightly-below-average defender? Yeah, he’s still easily worth $8 million, but how much are you giving up to acquire him? And if the answer is “not a ton,” then why in the world would the Cubs trade him?

Mostly, what I take away from the article is the indication at its conclusion that, even as Theo Epstein suggested it would be fine for the Cubs not to make a significant trade, the Cubs will *NOT* be satisfied with the status quo this offseason. Maybe that means considering offers for Schwarber, from the Yankees or elsewhere. I’d be surprised if there was a trade fit involving Schwarber that makes sense for both teams at this time. I’d be less surprised if that happened with the guys who are more frequently discussed in these trade rumors, Kris Bryant and Willson Contreras.

As a next layer consideration, any chance this gets out there today in part because the Cubs wouldn’t mind trade partners – on whichever players – knowing that they’ve got interest in Schwarber? Like, hey, if you want one of the other guys, maybe get a deal done because otherwise we might move on to trading an entirely different player? Because we aren’t trading them all?

Or are the Yankees trying to put a little pressure on another team with a lefty bat to offer? The George A. King III article cited by Rosenthal includes a mention of Brandon Belt and Chris Davis (lulz), but only if the Giants or Orioles eat a lot of salary. Or maybe trying to push a low-cost free agent like Mitch Moreland or Justin Smoak or Eric Thames to finish a deal? Makes you wonder if this is really all about that side of the story? Remember: it’s not always all about the Cubs …