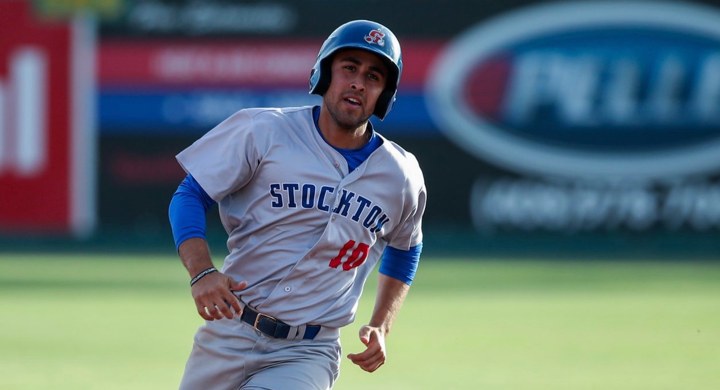 As things do when a trade for a prospect occurs, details came out slow and steady – and largely generic – about new Cubs prospect Alfonso Rivas when the Cubs acquired him for Tony Kemp this week.

He was a 2018 4th rounder. He is a “real” prospect, top 30 in the A’s organization. Brett pointed out the tie to new Cubs Scouting Director Dan Kantrovitz. And then we had an A’s executive’s comp, and, oh boy, had the Cubs won the trade by then:

A's acquire Tony Kemp from Cubs; what a scout says about Kemp, plus more on Alfonso Rivas, who Ed Sprague told me is "Mark Grace-like" at first base: https://t.co/dXdkQ3cDNY

Alllllrighty then. I hate to be the guy to come in here and throw ice cold water on everyone’s enjoyment of a real, actual, Cubs baseball transaction, but Mark Grace is one of those blanket comps for left-handed first baseman with below-average power. Grace’s big league success was a rarity at first base, and it’s because he was an extraordinarily talented hitter, with impeccable contact and discipline ability, and a great glove, to boot. Let’s not put a prospect behind the 8-ball from the jump by comparing him to Grace.

It struck me that it’s worth a little more depth into what Rivas is, what he is not, and how he fits into the Cubs plans in 2021 and beyond.

As we said, Rivas was a 4th round draft pick by the A’s in 2018, out of the University of Arizona, where he’d posted back-to-back .950 OPS seasons. He’d pitched as an underclassmen, which I mention merely so you know there’s a good arm there. Baseball America ranked Rivas as the #123 prospect in the 2018 draft, writing, “Observers have no doubt that Rivas will hit, with most evaluators putting a plus future grade on the hit tool … The biggest question is whether Rivas will develop enough power to profile at either first base, which is his best defensive position, or a corner outfield spot.”

The A’s sent Rivas to the short-season New York – Penn League to finish 2018, where he posted a 137 wRC+ in a large 61-game sample. The A’s were comfortable enough to have Rivas skip Low-A and go straight to the High-A California League this season. He played well there, and was given the assignment of filling in at Triple-A for eight games and the playoffs when the Las Vegas Aviators lost Seth Brown to the Major Leagues.

Rivas then played with Cubs prospects on the Mesa Solar Sox in the Arizona Fall League. In total, across High-A, his Triple-A sample (with the playoff stats included) and the AFL, Rivas played 142 games in 2019. He’s clearly a gamer. Across the three leagues, he totaled to hit .286/.383/.420, with 80 walks and 144 strikeouts in 621 total plate appearances.

This is a case, in my quick scouting dive on Rivas, where the stat line is going to give you a pretty accurate picture of the player. Rivas is extremely patient at the plate, with a really good feel for the strike zone, and his strengths within it. I was both impressed and left wanting more from Rivas’ swing and offensive approach, which is advanced, but will be limiting to his overall ceiling.

Here’s Rivas’ HR during 8-game reg season stint in AAA; swing in slo-mo at end. Certainly an inside-out swing, and given hit chart, probably more common than an anecdotal highlight. Little League Dads will love this, but Rivas will need counter when book comes out to jam him. pic.twitter.com/oqkqwQAjws

What I see there is a player on the small side, unlikely to add significant muscle mass going forward. His swing reminds me some of Dustin Ackley, a former college baseball star (and undersized first baseman) who never did develop the power his believers forecasted. Ackley’s hit tool, once considered elite, was exposed by the highest echelon pitching. This swing also makes things particularly difficult against left-handed pitching, and you saw that with Rivas last year, when he had a 165-point OPS platoon split.

The good news is there’s a clear objective here for the Cubs minor league coaches. They need to find a way for Rivas to be more dangerous to the pull side, more dangerous against pitches on the inner half. Whether this would accompany a growth in power, I’m not sure, the body type doesn’t scream future big league corner regular. But he can profile as a useful bench bat, a John Vander Wal sort of player, with those improvements.

Another answer the Cubs need to get is whether Rivas will be able to handle the outfield on a more regular basis. His foot speed is reportedly poor, though it doesn’t look completely untenable in my viewings. His arm will be an asset wherever he plays. For a guy with a bench profile, Rivas would do well to prove himself viable everywhere he can.

I expect the Cubs will start Rivas at Double-A Tennessee this year, probably sharing 1B/LF duty with Jared Young. The Iowa Cubs don’t currently have a first baseman on the roster, though, so there is room for him to progress. And given his advanced plate approach (among the best of any Cub prospect in the minors), that certainly wouldn’t surprise.

To answer before I’m asked, I think Rivas would slot in somewhere in the 30-50 range in the system for me. He belongs in a grouping with guys like Trent Giambrone, P.J. Higgins, Jhonny Pereda and even Robel Garcia. Which, in my opinion, is a pretty solid return for an out-of-options bench player with disappointment on his recent resume.