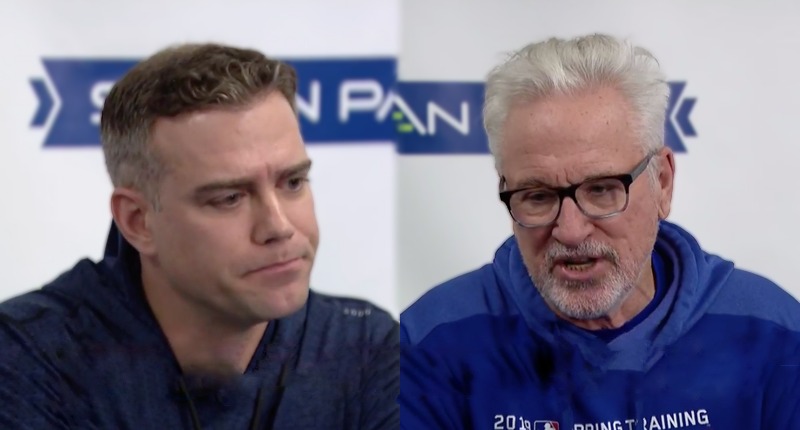 Will this button everything up on the planned divorce of Joe Maddon and the Chicago Cubs? Probably not. But only fair to give Theo Epstein due course to respond to the way Maddon recalled the decline in the philosophical synergy of the relationship over the course of 2018 and 2019.

Among Epstein’s remarks yesterday in response to Maddon indicating that he felt ready to go before the 2019 season ended, and how he felt the front office wanted to get more and more involved after 2017:

In ESPN interview with Maddon, the former Cubs manager said he realized he didn't want to return to Chicago before the season ended. Theo Epstein said "that would conflict with some of the things he and his agent were saying and doing towards the end of the season." Full quote: pic.twitter.com/MNv99xNEZe

Theo: “Joe and I aren’t exactly the same. His approach was more ‘Things will work themselves out. These are great players. Let them play. This will work out.'"

“From my perspective, there was a little bit more cause for concern."

"Joe and I aren't exactly the same. His approach was more 'things will work themselves out. These are great players. Let them play.'"

Theo with some interesting comments in regards to Maddon story: pic.twitter.com/19IMBsRdKR

You get the sense – although he’s not going to say it explicitly – that Epstein is confirming there was an increasing front office presence in the clubhouse culture, work habits, coaching staff decisions, rules, accountability, etc., in the final two years of Maddon’s tenure. From the front office’s perspective, I suspect – and we saw this going back to last offseason – there just needed to be a little bit tighter ship (hence going with a guy like David Ross, who has a little more of that hardass edge about him when it comes to the players).

The complacency that arrived after the World Series win almost certainly touched corners of the organization that go far, far beyond the clubhouse, but Epstein did raise the concern in the managerial context yesterday:

Great read from @sahadevsharma on Epstein/Maddon, in hindsight, and I find it interesting that (1) Epstein is now much more open about pointing to "complacency" (he'd resisted that label before), and (2) it comes up in connection with the manager. https://t.co/nRBqytHJMM pic.twitter.com/KBL6rPrQee

So, then, if the front office was growing increasingly concerned about complacency in the clubhouse – a culture that Epstein wants to come from the manager – and then if the front office felt it had to get more involved, which was pointed out by Maddon … well, you’ve got a recipe there for a bit of he-said, he-said on how things degraded. It also makes all the more sense that both sides felt it was a good time to part ways (whenever that precisely happened).

In the end, the divorce will probably always be remembered slightly differently by the two sides, even if both are adamant that it remains a positive experience, a positive relationship, and it was just time to part ways. I hope Maddon does very well with a talent-rich Angels roster, and I hope Ross and the new coaching staff can be part of helping maximize the wins available to a talented Cubs roster.