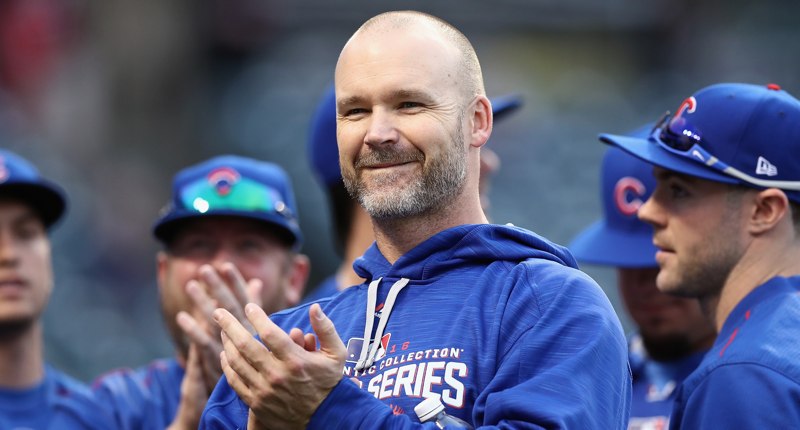 Javy Báez spoke this weekend about his own level of preparedness before games last year, and about how the team worked together – or didn’t – in its preparation the last couple years. It wasn’t a direct shot at Joe Maddon, but it did square with the front office’s characterization that it had concerns about a sense of complacency taking hold in the clubhouse.

With a new manager in charge, and one with a reputation for being more traditional in his sense of structure (and, by the way, a guy who was very important in the clubhouse when it *was* humming along nicely), it’s not unreasonable to say that David Ross might be a much better fit for the current Cubs situation than Joe Maddon would have been.

And, without casting any aspersions on Maddon, it does seem like Cubs players are very on board for what Ross is bringing to the clubhouse.

Kyle Hendricks was particularly clear on that front in this read from Patrick Mooney:

Kyle Hendricks explains the Cubs' transition from Joe Maddon to David Ross: "This is what needed to be done." https://t.co/zFk4dsfV2t

Among Hendricks’ comments: “That’s what we’ve been looking for, that’s what we’ve needed, is one unifying voice. Someone that’s going to say what needs to be said, keep the accountability around here. And it’s clear as day already that Rossy’s doing that. I think that’s why there’s so much excitement this early in camp …. If you were in the room, (you would understand) …. Just the way he’s talking to us, it’s real. He’s just being the same guy he’s always been, bringing that intensity, the accountability. It fires guys up right away in the morning. We head out to the field and we just want to kill all the work that we have that day and get better. Instead of just kind of getting ready. Not that it (was) going through the motions, but it’s different than just going out there and getting ready and getting prepared for your first game. It’s taking advantage of every rep out there and focusing on every detail because that’s what’s going to make the difference at the end.”

Obviously that kind of impact on preparation and accountability is what you *HOPE* you’d see under Ross after the transition from Maddon, and then you *HOPE* it would translate to improved performance at the margins for a lot of the players in the regular season. We can’t really know until we know, but Hendricks doesn’t strike me as the type of guy to hype things just for the sake of hype. Does he tend to be more positive? Yes. I think so. But this sounds like quite a bit more than that.

It’s important to note the careful distinction here between saying Maddon effed everything up and saying things simply got out of whack for a whole lot of reasons. I think Sahadev Sharma put it very well here: “Báez and others who seem excited about changes have all stopped short of blaming Maddon for the issues. Some could say this is less about criticizing what Maddon didn’t do and more about how a single voice can grow stale. But ultimately, there was a disconnect between what Maddon wanted to do and what the front office expected.”

Maddon was perfect for the Cubs at the time in 2015 and 2016, and then we came to see that he wasn’t anymore. With the benefit of time and the ability to see the natural arcs of things, it is no longer especially difficult to see why it was time for a change when a tweet like this pops up as I’m writing this post:

Joe Maddon says in spring training he leaves all the pitching decisions to Mickey Callaway and all the lineups to bench coach Mike Gallego. What’s left for Maddon? “Intellectualizing the day and riding my bike.”

By contrast, this also just popped up as I was writing:

Kris Bryant's takeaway from David Ross' speech to the 2020 Cubs this morning: "I wanted to run through a wall."

I don’t think it’s reasonable to pin the entirety of your hopes for 2020 on a manager swap making a dozen games’ worth of difference,