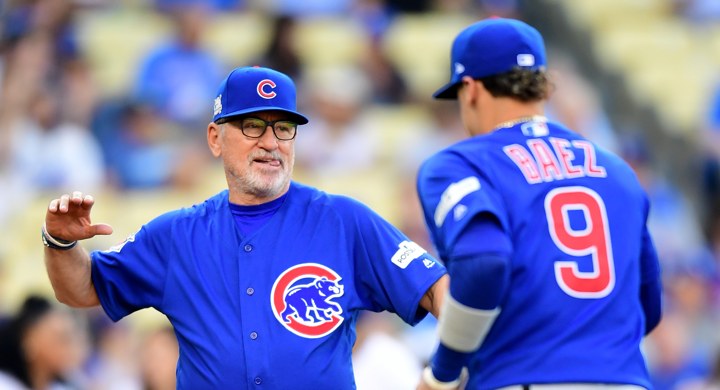 Javy Baez held court with reporters today in Mesa, Arizona, and although he got into a range of topics, there was one area that REALLY stood out, particularly given the recent back-and-forth between Joe Maddon and Theo Epstein.

While Joe Maddon indicated unhappiness about the way things went in 2018 and 2019 in terms of increasing front office involvement, Theo Epstein suggested that the front office had increasing concerns about a growing complacency (which, let’s be honest, sure seems like it had manifested itself in game preparedness, among many other less visible things).

With that background in mind, as well as everything else we already think about the cultural shift that happened in the Cubs’ clubhouse from 2017 to 2018 to 2019, I find these comments from Javy Baez very telling:

Javy Báez: “I just feel like a lot of players were doing the same as me. They were getting loose during the game. You can lose the game in the first inning. Sometimes when you’re not ready – and the other team scores by something simple – it’s because of that. We weren’t ready.”

Baez on pre-game work 2019 vs. 2020: "I was getting ready during the game, which is not good. This year, before the games, we got to be out there as a team – stretch as a team and be together as a team so we can play together.”

Remember when the Cubs used to call batting practice eyewash? Javier Báez admits that he did too much of his pregame routine indoors, on his own, an issue that David Ross is supposed to fix: “I felt like I was getting loose during the first four innings.”

"I got to the field and instead of going outside and hitting BP, I would do everything inside, which is not the same. Once I go out to the field for the game, I feel like I wasn't ready," Baez said.

Baez on last year: “It wasn’t something bad but we have a lot of optional things. Not mandatory. Everyone kind of sat back on that, including me. I wasn’t really going out there and preparing for the game. I was getting ready during the game, which is not good.”

Baez: "For,me, it’s thinking as a team that we haven’t been doing these past two years."

You get the gist.

None of this is to lay the blame for the disappointments of 2018 and 2019 squarely at the feet of Joe Maddon, because that’s nuts. Of course the players merit a great deal of the blame, as well as the front office. And neither is any of this to say that things will just magically be better because there’s a new, hardass-ier manager in the house. The players still have to stay healthy and perform.

I just think it’s further confirmation that Joe Maddon was very much into a style of managing and clubhouse building that worked so perfectly for this group for many years. And then it stopped working. Blame that on Maddon, or the players, or the front office, or all of them. It doesn’t really matter at this point. Instead, I think it just matters to note that it’s clear a lot of little, under-the-hood things about maximizing player performance when the games arrive was probably not happening the last couple years. That really sucks. Here’s hoping it turns in a big way this season *AND* that it makes a difference.

Also, by the way, Javy Baez is never going to dump on Maddon:

Baez on whether manager change was needed: