Are Problems at Sinclair Causing Problems for the Cubs and Marquee? What About Comcast? YouTube TV? Skip to content

And that timing could not be worse for the Chicago Cubs, who are trying to get their new Marquee Sports Network carried on Comcast, which covers half the market in Chicago. The problem? Things are so bad for Marquee partner Sinclair that they may be forced to bundle the Chicago-local Comcast negotiations with the much larger negotiations for their full complement of FOX Sports RSNs … and those deals are not up until later in the summer.

Until it became clear in recent weeks just how dire things for Sinclair might be (more on that in a moment), there really wasn’t much concern about the different time tables for the Comcast carriage deals – a Marquee deal could get done before Opening Day, and then Sinclair could separately get its FOX Sports deals done later this year when those deals come up for renewal.

But now that Sinclair might be in a really bad spot on the carriage front? Frankly, I think it’s a lot harder to predict just how Sinclair will proceed.

Indeed, a new report from CableFax speculates that Sinclair may have always intended on bundling all Comcast-RSN negotiations together, which would mean no carriage deal for Marquee until that whole bundle of deals are done. And if those other deals are not up for renewal until, say, August? That would make you very reasonably concerned that the sides couldn’t get a comprehensive carriage agreement finished by March 26, just to accommodate one partner, the Cubs.

That’s especially true at a time when the financial markets are in complete disarray, and things aren’t looking good for Sinclair overall – which could make Comcast squeeze even harder.

We should talk about something we haven’t discussed much, within the context of Marquee: Sinclair, who is handling carriage negotiations, is having a brutal year.

Ever since Sinclair thrust itself aggressively in the RSN space last year, their stock price has been absolutely crushed by investors that presumably do not believe Sinclair can make work their vision of leveraging all these RSNs together for even better carriage deals. DISH temporarily exiting the RSN space in July seems to have been perceived as a particularly bad sign by the market.

Notably, those negotiations happened while Disney still owned the FOX RSNs, and the DISH chairman recently suggested things might have gone differently if Sinclair had been in charge at the time. Bad timing for Sinclair, I guess, but nothing since has led investors to have more faith.

Sinclair is down nearly 70% since May of last year, when they originally agreed to purchase the FOX RSNs: 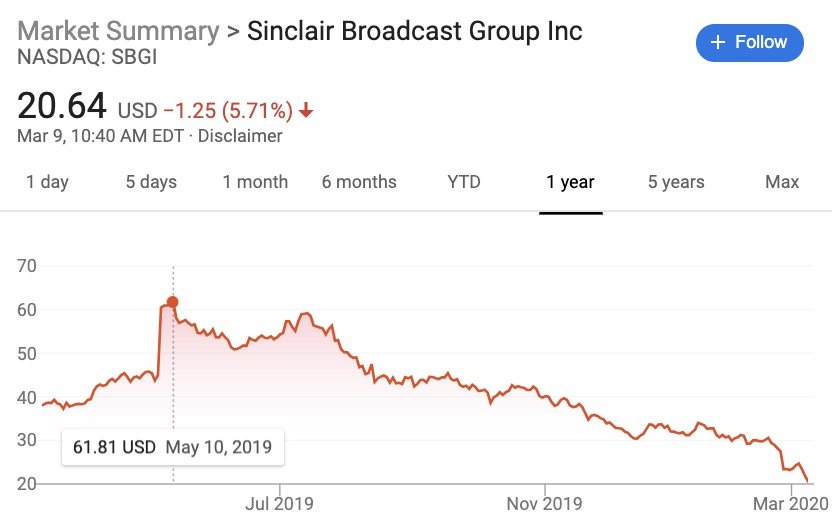 The Cubs announced their partnership with Sinclair back in February of last year, by the way, about three months before the FOX deals (which marked the stock top I indicated on that chart there). More bad timing? Or are investors simply too pessimistic on Sinclair’s ability to ultimately get carriage deals in place with Comcast and, maybe eventually, DISH? I mean, DISH has publicly indicated for a long time that they don’t necessarily want to walk away from regional sports forever. But clearly, the price is going to have to come down. Maybe that’s going to be the reality for all of these deals going forward: they get done eventually (which would be good for Cubs and other sports fans), but the price tags are simply not going to be close to what they were in the heyday (bad for the Cubs and Marquee).

Shifting gears – though it’s all ultimately related – to the YouTube TV drama from last week, and ensuing fallout.

The news has sorted itself out at bit after the angry announcement from the Yankees’ YES Network, and now we fully see the scope: Sinclair negotiated carriage deals with YouTube TV for 19 of its own 21 FOX-branded RSNs, but it left out two of its own RSNs in LA, and its partner network in New York – the YES Network. Because Marquee Sports Network was not explicitly included in the announcement, we also know that no deal has been reached between Marquee and YouTube TV.

My read? A guess? Sinclair just really wanted to get a deal done (feeling the pressure, perhaps, of having acquired all these RSNs and not shown progress in landing big carriage deals), but were unwilling to hold YouTube TV’s feet to the fire to get an appropriate deal for YES Network. So they effectively cut YES loose on this carriage negotiation, and got the best deal they could to have something on the books.

The good news is that lumping Marquee in with YES Network is a little imperfect. Although Marquee is a partner with Sinclair (small stake as opposed to owned), which is the same as with YES Network, YES is also a partner with Amazon. And Amazon is getting the exclusive rights to 21 Yankees games this year. Those are games YouTube TV would not be getting in a re-upped deal with YES. I mean, that’s what? 15% of the most valuable content YES has to offer? And it’s streaming content, so it cuts right at the heart of what YouTube is trying to do with its live product. That doesn’t feel like *quite* the same negotiation as would take place with Marquee.

Moreover, Marquee has never had an initial deal with YouTube TV – they’re still working from scratch – and there might be some difference there, too, though I won’t claim to know any particulars.

And finally, the Cubs and Marquee have that much, much bigger fish to fry in Comcast, so maybe they’d opt to be aggressive to land YouTube TV deal for Marquee right now only in a situation where they felt like it would definitely help create leverage with Comcast. So if Sinclair is leaving Marquee out in the cold in its YouTube TV negotiations, the Cubs might be inclined to let that lie for a bit anyway, depending on whatever is happening with Comcast. (Again, we don’t know that a Marquee deal with Comcast won’t happen long before Sinclair’s other RSNs get Comcast deals. Heck, we’re hoping that does happen!)

And, much more importantly, we’ll see what happens with the Cubs’ and Sinclair’s ability to get a Marquee deal done with Comcast separate from the bigger set of FOX RSNs. Clearly, Sinclair has shown a willingness *not* to bundle everything together in a negotiation. And although that hurt the Yankees and YES with respect to YouTube TV, maybe it could help the Cubs and Marquee with respect to Comcast.

Or maybe the Cubs will be able, at some point if they haven’t already, to take carriage negotiations with Comcast into their own hands and figure out a way to solve that already complicated situation.