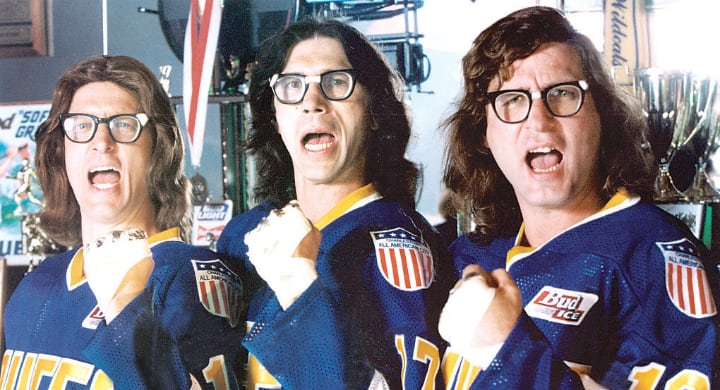 Well, tonight should have been the third game of the season for the Chicago Cubs, who would obviously be heading towards a 3-0 start to the season. Instead, we’re still likely months away from actual Opening Day. Instead of the game, we’re gonna get together and watch a movie. Game 5 of the World Series is also airing on Marquee at 7:00. Enjoy your Sunday night, friends.

Although I’m aware of it’s cultural significance and relative status within the sports and comedy-film worlds, I’ve never actually seen Slap Shot, so I don’t have much to offer you in terms of an intro. I’m just really excited to finally see it. That’s why it’s going so early in the rotation, despite reaching just 19 total votes (11th most) overall.

The one thing I can tell you, however, is that it has an interesting connection to the first movie on our list, Major League.

The guy who wrote and directed Major League, wrote the Academy Award winning “The Sting.” Meanwhile, the guy who directed “The Sting,” George Roy Hill, directed “Slap Shot.” So basically the writing/directing duo on a movie that one half-a-dozen Oscars both went off to create legendary sports comedies later in their careers. Pretty cool, eh?