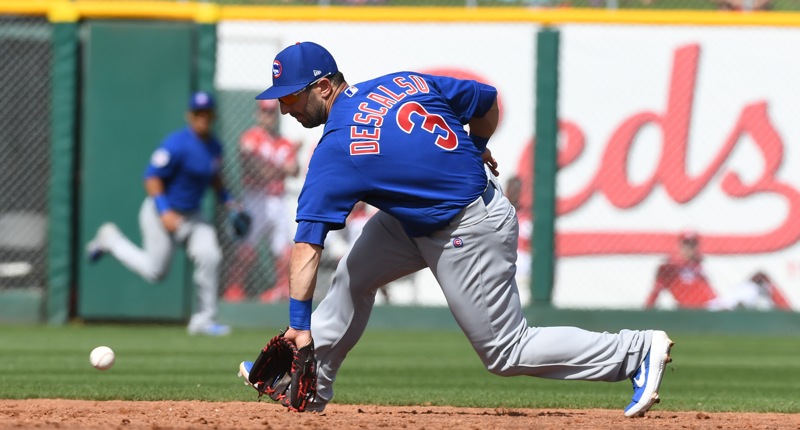 In conjunction with setting the Opening Day roster today, the Cubs had to make a whole bunch of roster moves. Some are totally normal ones you’d expect every year, and others are pretty funky thanks to the weird roster rules of the day. I’ll try to be clear.

One move was super easy: Jose Quintana goes to the 10-day Injured List, retroactive to July 20. He’ll be eligible to come off at the end of this month, but realistically, no one is expecting him to be ready to pitch competitively until mid-August at the very earliest.

The Cubs had a full 40-man roster coming into today, so they had to open up two spots in order to add reliever Rex Brothers and catcher Josh Phegley, who’d been with the Cubs on non-roster minor league deals. The Cubs opened up those spots by (1) putting Daniel Descalso (ankle … still? new? don’t know) on the 45-day Injured List, which is THIS YEAR’s equivalent of the 60-day IL (that means Descalso is still in the org, but he’s off the 40-man); and (2) DFA’ing Robel Garcia. That one is a bit of a surprise, though maybe it shouldn’t be, since we all knew what a steep hill he had to climb with his contact skills to win a job at the big league level. The Cubs will now have to trade, release, or waive Garcia. Perhaps the hope is that he clears waivers, and can then stay at South Bend?

Also at South Bend, outfielder Mark Zagunis decided to opt out of playing this year, so he technically goes on the restricted list, which takes him out of the 60-man player pool, which stands at 53 after all this maneuvering. So, now the Cubs could add some additional prospects if they want, but they’ll likely leave open at least some space for in-season moves.

Descalso, you’ll note, is actually not on the 40-man NOR is he on the 60-man, so if he were ever to return from his interminable ankle injury, he’d go back on both rosters. I presume the Cubs are just keeping him around because you might as well, since he’s already under contract. I’d be very surprised if he contributes meaningfully at any point this year. Such a bummer how that signing has played out.

Whew. OK. Did I get it all in? I think so. And check out the Cubs’ Opening Day roster if you haven’t yet.