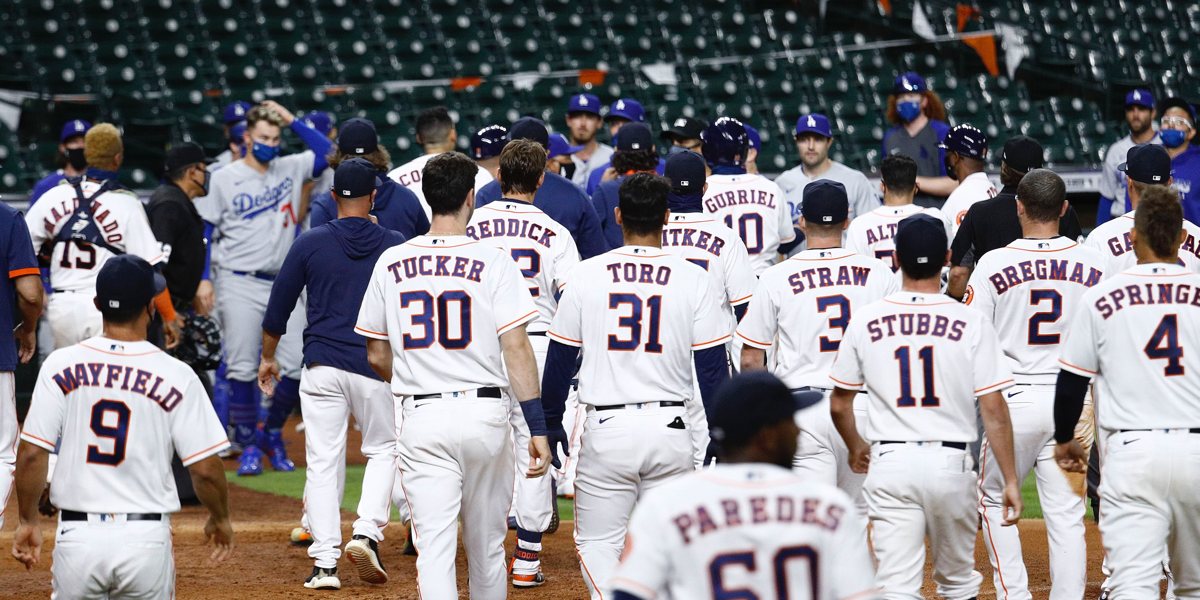 Back in February and March, one of the most hotly anticipated moments of the coming 2020 season was … well … pretty much any Houston Astros game.

The pandemic has made it slightly harder to remember the depths of the anger, but thanks to their rampant and systematic cheating in 2017 (and beyond), which helped them win the World Series over the Dodgers, the Astros were going to be serious targets all season long. Targets of pitchers ire. Targets of victory laps on the field. Targets of some of the loudest booing you would have ever heard. (Seriously, Jose Altuve got blasted by SPRING TRAINING fans.)

But, yes, the pandemic. It didn’t totally take away the anger, but it definitely took the Astros story off the front page. It also took away fans from the equation, and made confrontations among teams a much more dangerous enterprise. Consider that, in the current environment, rumbles among teams carry with them not only the usual risks of physical harm, but now the much more significant risk of spreading COVID-19 among multiple teams. You just can’t have it this year, however angry you might still be at the Astros.

Of course, this is to set up last night’s Astros-Dodgers game, which you knew was going to feature SOME kind of extracurriculars, but you really hoped it wouldn’t involve the teams actually getting together physically. What resulted could’ve been a lot worse, but it was still a serious social distancing problem that you cannot have.

It started with notoriously wild Dodgers reliever Joe Kelly being notoriously wild, and then showing up the Astros (hey, I’m fine with that part, maybe less so with the throwing at guys part):

After Kelly did his thing, the Astros got pissed, and the benches cleared:

The Dodgers and Astros cleared the benches after Joe Kelly struck out and exchanged words with Carlos Correa. pic.twitter.com/Z2l2A1sMG6

Kelly and Corra exchanged words after Correa struck out to end the inning. Then the benches cleared. pic.twitter.com/tpSYuRC0Hg

"Get on the mound, motherfucker." pic.twitter.com/1UrW4sYwua

Dusty Baker said after Carlos Correa struck out, Joe Kelly said, "Nice, swing, bitch." Dusty: "What upset me was the umpires warned us. Why don't you warn him? He's the one throwing the ball. He's the one that started this mess in the first place. I didn't like it at all." pic.twitter.com/DOtaiYPVYT

In normal times, I would enjoy the heck out of this drama as a sideshow, and I’d probably talk about how the Astros have a lot of this coming, though I don’t want to see guys get thrown at (especially at the head).

In THESE times, however, it all comes with this layer of discomfort, because you don’t want to see large groups of players getting all close together right now. Sure, the risk of transmission outside from very brief contact like that is really low … but why risk anything at all? Moreover, why risk the optics of not doing the right things? Especially after the Marlins situation!

That is all to say, the league is going to have to respond to this in a very serious, very loud way. I don’t actually know whether that means punishments, or if it means some kind of message about the unnecessary risks this creates. But something. The league can’t act like this is OK, or couldn’t get much worse in the coming weeks.