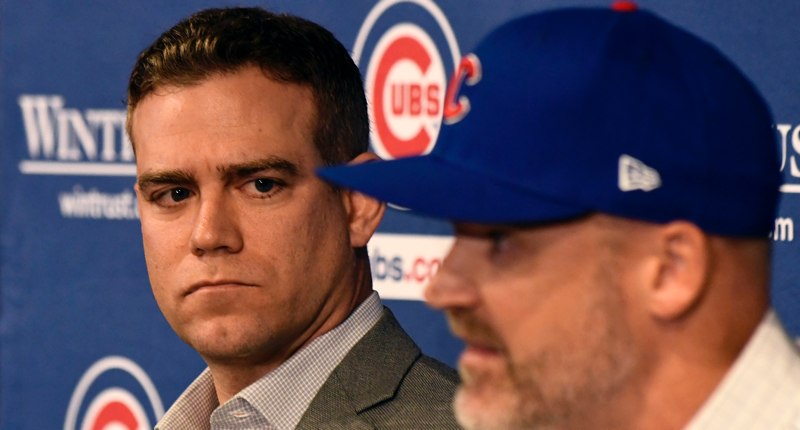 We lost our power early this morning, and after an hour or so, it came back on. No big deal. Must’ve been something minor. But two minutes after the power came back on, there was a big, ugly sound somewhere outside and the power went right back out. Hasn’t come back since. That seems not great.

•   The Cubs are up to 9-2 on the season, the best record in the National League, and four games clear of the Reds and Cardinals in the NL Central. The Cubs’ pace won’t last, but it’s also absurd that they have a four-game lead just 11 games into the season. Their playoff odds at FanGraphs are already up to 94.2% thanks to the crazy start and the expanded postseason. It already would’ve been wildly disappointing if the Cubs didn’t make the playoffs when 8 teams out of 15 make it, but now it would be even more of a stunner than anything that happened the last two years.

•   Theo Epstein spoke with the media last night, and Jordan Bastian laid out the full Q&A here for you to peruse and digest. It’s nice to appreciate a leader who is so thoughtful and kind at a time like this. Epstein just always seems to hit the right notes, and on the team-pandemic-related stuff, this stood out to me, simultaneously acknowledging certain realities of this process while also underscoring that we shouldn’t jump to blame: “No set of protocols are perfect. They’re designed to minimize the risk as best as you possibly can. They’re designed to put you into a position to reduce your chances of getting the infection. And then, if someone in your organization gets it, they’re designed to try to minimize the spread. Now, obviously, in these first two examples, it’s proven really difficult to contain the virus once it’s infiltrated an organization. I think that’s the focus of what we need to learn from this and try to make some adjustments. But, it’s impossible for any set of protocols to eliminate the chance of infection. That’s just not going to happen. So, there should be no inferences out there that everyone who’s positive has violated protocols. That’s just not how this is working.”

•   We are each of us constantly at risk for contracting the virus in ways we didn’t anticipate, so even as the Cubs have had a great deal of success so far (so much that MLB reportedly reached out to get tips), that doesn’t mean it’ll continue perfectly for another two months.

•   As for his rookie manager, Epstein was effusive in his praise of David Ross, and hinted that he’s already seen improvement in certain areas that seemed deficient by the end of Joe Maddon’s tenure (and led to those many “philosophical differences” about organizational complacency): “[The whole being less than the sum of the parts is] an area where we collectively have fallen short, I think, the last couple years. I think we’ve had more talent than the results would indicate the last couple years. You know, that’s why there have been different attempts to change the environment. You guys that have followed the club have known that …. [Ross] has stepped in and helped address some things that have been lingering for years, you know? And to do that his first month on the job essentially, his first two weeks as a regular season manager, is just really impressive. It just shows he’s fearless. He’s alert, observant and has great emotional intelligence, kind of knowing when to step in to challenge a player and call him out, and knowing when to step in and offer a kind word and support and make it really clear that he’s got a player’s back. I think that’s a big part of being a leader and being a manager in the Major Leagues these days, and he’s just got really good feel for it. And he has not eased his way in. He’s on it in a very, very impressive way.”

•   As we discussed for a long time, Joe Maddon was perfect for the 2015-17 Cubs, and then he was not. It isn’t a shot at Maddon or his hands-off style – in fact, it’s more of a shot at the organization as a whole for not more quickly addressing things that fell behind the curve after winning the World Series. Ross was the right guy at this moment to come in the door and organically change player preparation, focus, etc.

•   Not that you would be surprised at this point, but Ross also has commanded the total respect of his players:

The first-place Cubs are rolling under David Ross.#Cubs | @Cubs pic.twitter.com/V5MP6GpAj8

•   Similarly, from Jon Lester, who underscores that idea that guys just want to do well for Ross (NBCSC): “I think the biggest thing with Rossy is just his energy. The presence that he brings when he’s in a dugout or in a clubhouse, he demands respect. He demands attention to detail. And guys know that when we show up every day. So, when we’re out doing our work you kind of feel like he’s always watching you. Not in a bad way, but you want to do the right things to keep the line moving offensively or keep the line moving as far as our rotation.”

•   That’s two outings in a row that Kyle Ryan got lit up on the ole hard contact meter, and were it not for his velocity being way down to open this season, it might not concern you right away. But for a guy who was delayed in his start to camp, and who didn’t have a lot of velocity to begin with, losing three-ish MPH on his fastball and his cutter is a serious issue. Moreover, the fact that his spin rate is alarmingly down on the cutter is also a serious issue (he’s getting far less horizontal movement on the pitch than last year). I think we are already seeing the fruits of that issue in the form of rockets – by expected wOBA, Ryan’s cutter was his best pitch last year, and this year it’s his worst. I know the Cubs are hard up for lefties at the moment, but until and unless Ryan gets himself right, it already seems like he’s another guy that has to have a very short leash, and ideally isn’t used in high-leverage moments.

•   The latest from the podcast, if you’ve not checked it out (subscribe on iTunes – it’s free!):

Kris Bryant poses for a photo with fans while leaving Wrigley Field after the Cubs defeated the Kansas City Royals Monday in Chicago. pic.twitter.com/nNkuHtBYjo

An early birthday surprise for @ARizzo44 from our family @LurieChildrens. pic.twitter.com/md9wlm5eUY

•   Air fryers, writing utensils, and much more are your Deals of the Day at Amazon. #ad