The Cubs Did Joyful, Beautiful, and Never-Done-Before Things in That 9th Inning Comeback Skip to content 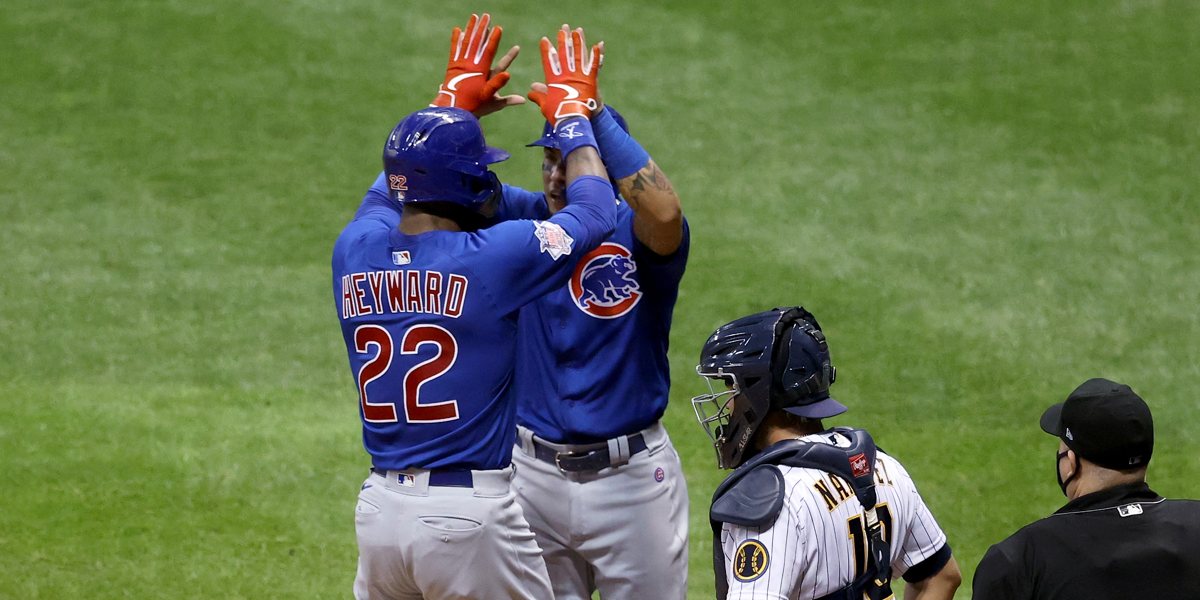 With an offense that was working on an 18th consecutive scoreless inning, and with one of the best pitchers in baseball on the mound, it was fair to assume the Cubs were toast last night. And that is precisely the understandable feeling that made what actually happened so incredible.

To open the 9th inning, Kyle Schwarber, a lefty and perhaps desperate against Hader, tried to bunt his way on base. He tried it even with two strikes. He fouled the ball off, and that’s a strikeout. It really fit the tone of the last two nights.

But then with one out and the Cubs down two, Javy Báez sent a liner the other way for a solid single off of Josh Hader. Cool. Good for Báez’s psyche, perhaps, but not super meaningful when you’re talking about Hader. Then, down two strikes, Anthony Rizzo – shirtless under his jersey and sporting his two huge chains – reached down to take a tough slider into right field for a single of his own. I let myself start thinking about the possibilities.

Specifically, I wanted to see Billy Hamilton pinch-running there – wish granted – and then I wanted to see Hamilton take a shot at stealing second. My thinking was that getting anything more than one more single off of Hader was so extremely unlikely that the only real shot the Cubs had to tie the game was to get Hamilton into scoring position.

But Hamilton never went. He danced off of first base for a few pitches, and with Jason Heyward down 1-2 in the count, it looked like the window to steal while Heyward had a chance to make something happen had already been lost.

Well, I was so very wrong about what could happen off of Hader, off of whom lefties are hitting .122/.224/.258 for his career. Heyward got a well-located inside fastball and absolutely wrecked it to give the Cubs the lead. Then, for good measure, new Cub Ildemaro Vargas followed by going back-to-back with a wrecked shot of his own:

I was losing my mind. It was one of those beautiful baseball moments where I just flat couldn’t believe what I was seeing. That kind of comeback against Josh Hader simply doesn’t happen. I mean, in the extremely rare event that it has happened over the past few years, I’ve celebrated and shared it like a huge bit of news, regardless of what team he was facing. It’s that rare! And for the game-changing homer to be a lefty with two strikes? That has literally happened only once before to Hader.

Reiterating how rare it was:

Josh Hader has never allowed two, two-strike home runs in any appearance of his career. #Brewers

Only he didn’t say fun:

A hilarious screenshot and silly art:

Extremely unlikely comeback for the Cubs, even when you DON’T have the context of who the pitcher was on the mound:

Brewers were up to 96.3% win expectancy tonight. pic.twitter.com/VEYtTMzA32