Wish More for Darvish, Lester and the Rotation, Central Suckage, and Other Cubs Bullets | Bleacher Nation Skip to content 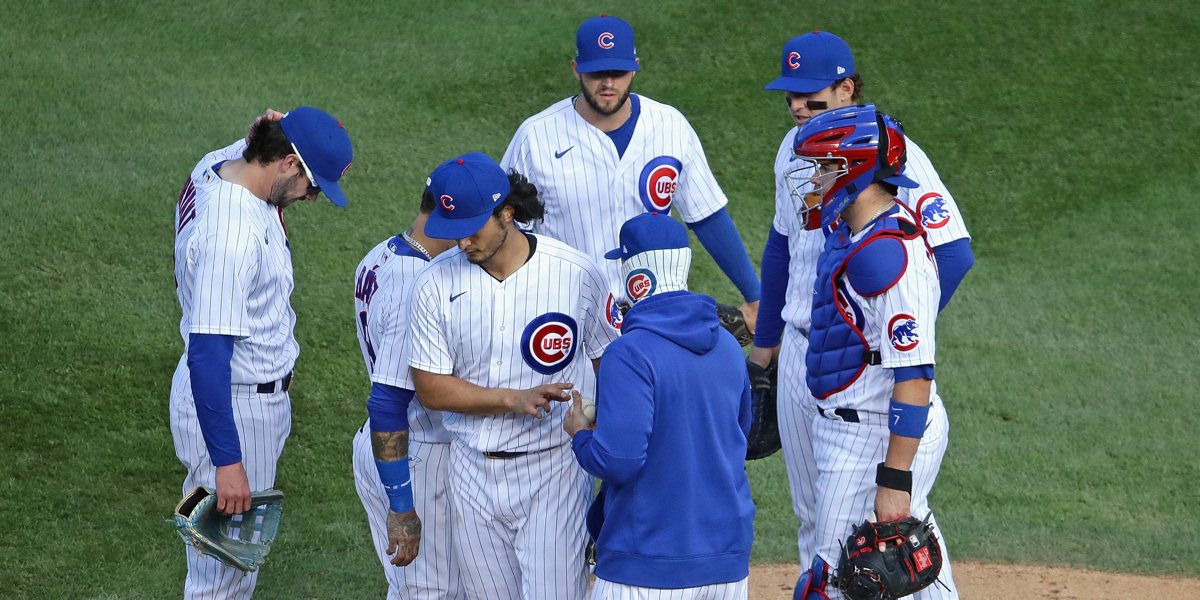 Up top, with the Cubs season now over, I have to say: Thank you to everyone for following along and trying to enjoy this messed up 2020 Cubs season. Being pissed off now is a testament to how real we let this thing get, and I suppose that was always a pretty great outcome when you look back at April and May. I have to remind myself of that fact, especially given how touch-and-go things seemed for so long. I’m grateful that we got to take in a season together this year, and I’m grateful that we’re still able to keep doing our thing at BN.

To that end, a reminder that we don’t shut down the Cubs coverage in the offseason. You can expect it to keep on humming until Pitchers and Catchers Report in February … whatever the world looks like at that time.

•   It really sucks that Yu Darvish didn’t get a chance to move forward in the postseason, but you can’t say he didn’t pitch really well in his first playoff start since the 2017 World Series (where the Astros totally cheated and screwed him). There is no “playoff Darvish” as a bad thing. He didn’t choke against the Astros. He doesn’t crumble under the pressure. None of that BS. He’s just an exceptional pitcher who pitched exceptionally well all year.

•   And, like Darvish said, it sucks that the series ending yesterday means that Jon Lester doesn’t get another start this year with the Cubs at Wrigley Field. Lester, 36, has a $25 million team option for next year with a $10 million buyout, so he’ll be bought out. That doesn’t mean his time with the Cubs is definitely over, but the reality of his decline and the market is this: pitchers with Lester’s profile and at his age were already not commanding significant contracts even before everything changed. Just last year, pre-pandemic, Hamels was a year younger and coming off a much better two-year stretch, and he got a one-year, $18 million deal. There was a great deal of interest, but multi-year offers were almost certainly only a little above that one-year level, so Hamels bet on himself (unfortunately for him, he was injured all year, so now his market is a huge question mark).

•   Now, post-pandemic, a year older Lester with worse platform seasons? I do think he can probably get a guaranteed contract, but it’s going to be for very, very modest dollars if he chooses to keep pitching. For the Cubs, I think it’s debatable whether they will want to commit some of their modestly-available dollars to the modest cost of Lester. They may decide that, even separate from the money, it’s better for the organization to make sure there are 2021 starts available for guys like Alec Mills, Adbert Alzolay, Brailyn Marquez (maybe), and the Tyson Miller-Justin Steele-Cory Abbott group if any shows he’s ready. Then again, the Cubs right now have only Darvish and Kyle Hendricks locked into the rotation, so it’s not as if there isn’t plenty of space at the moment.

•   The new Mets owner – the richest individual owner in baseball – is already flexing:

A source confirms that the Mets' pandemic-related paycuts — 5-30% depending on an individual's salary — end Nov. 1, as Sportico said.

•   Talk about a great way to create goodwill in your organization right out of the gate. Do right by your employees, and they will do right by you. And, you also just start to build up that positivity that pays off in the aggregate in the years to come. This is both humane and smart.

•   Kids books, foot massagers, and portable blenders are among your Deals of the Day at Amazon. #ad

•   RIP to a legend, for whom baseball had to lower the mound because he was too dang good:

“I wasn’t trying to intimidate anybody, are you kidding me? I was just trying to survive, man.”

•   Unlike the time this was called against Kyle Schwarber (which was only a couple weeks ago! you never see this call!), this one did seem a fair call, even if I still appreciate Willson Contreras’s effort:

You rarely see a MLB game where a hitter gets hit by a pitch an is not awarded 1st base. No doubt this was the correct call. pic.twitter.com/mzZFCbfHux

•   Contreras got hit later in the PA anyway, so.

•   Jokes, I have the gallows style available, though I am also conveying information:

The NL Central landed four teams in the postseason.

All four teams lost in the opening round.

In conclusion, the NL Central sucked this year.

But the Cubs were the Kings of the Suck.

•   The AL Central cratered in the postseason, too, and it’s notable that those divisions played only each other this year. You can’t take too much away from short postseason series, but man, these teams combined won, what, two games? Maybe both divisions really kinda stunk this year, which helped them net three of the four Wild Card teams … sorry, other divisions!