Hoping on Javy's Mechanics, Duffy is Pouty, Unique Pitching Conditions at Wrigley, and Other Cubs Bullets Skip to content

The Cubs can sweep the Mets today and get back to .500, each of which looked mighty impossible earlier in the week, especially before Jacob deGrom got TERRIFIED OF THE CUBS and asked out of tonight’s start.

•   Your for-what-it’s-worth comments from Javy Báez after last night’s game, which featured no strikeouts just a day after he struck out four times (Cubs.com): “The first thing you’ve got to do is flush it after the game,” Báez said of the previous night’s showing. “For me, it’s my timing. My timing, my approach and the trust that I have in the pitcher. I’m seeing the ball good, even though I struck out four times last night.” Based on his historically low contact rate, it would be surprising to learn that he’s seeing the ball well, but hey, if that means maybe it’s just a matter of timing and mechanics? Well, at least then you could hope that a fix will eventually set him right, and he can go right back to being the plus-offensive guy he was in 2018-19. I mean, for the *most* part, it requires only that he start making contact with fastballs in the strike zone at the rates he always did before 2020. Maybe something is just a little off – it doesn’t take much – and can be corrected.

•   David Ross supplements that hope (Cubs.com): “There’s some things he’s working on,” Ross said. “I don’t want to tell the world exactly everything that he’s going through. There’s some mechanical things and timing things that he’s still working on. You see glimpses of it.”

After first baseman Anthony Rizzo gloved Pete Alonso’s foul popup to end the game, he looked for teammate Matt Duffy across the diamond.

“You get the game ball,” he said, handing Duffy the ball. “You deserve it, Pouty.”

Apparently, Rizzo and “Pouty” Duffy have an inside joke that started after Duffy got on Rizzo for “pouting” after a tough game last week and Rizzo caught Duffy doing it after Tuesday’s game (after grounding into a double play in a pinch-hit at-bat).

•   Duffy’s three-hit night brought his slash line up to .267/.389/.333 (111 wRC+) over 18 plate appearances, and he has yet to strike out. I still don’t quite know what his role is on this team if everyone stays healthy – he will only very rarely get starts like last night – but I suppose it’s always good to have a high-contact bat at the ready. I think you’re aware of that by now, eh?

•   First base coach Craig Driver and bullpen coach Chris Young are now back with the Cubs after getting over COVID-19. Apparently Alec Mills had been filling in for some of Young’s duties down in the bullpen, which is both funny and also good.

•   Speaking of Mills and good, nice job covering three scoreless innings last night after the very brief Zach Davies outing. The outing was made more brief by David Ross deciding to keep the foot down in the 4th inning when the Cubs were stringing together hits (a pinch-hit decision paid off, too, with another run). Davies was getting hammered through four innings – the most hard contact he’s ever given up in a start – so maybe it wasn’t a hard decision anyway.

•   Once again, it was not hard to see why Davies was struggling so much – his sinker is just being located horribly right now: 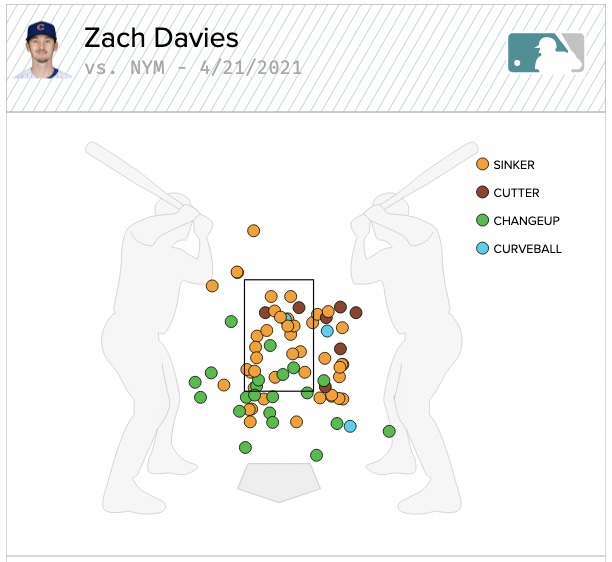 •   We’re four starts into the season for Davies, a previously top-tier command-control guy, and he has yet to show decent control. I don’t see anything super obvious when looking at his release point data (i.e., suggested of a clear mechanical issue or a latent injury), and when paired with Kyle Hendricks’ lack of control this year, I start to wonder whether there’s an adjustment period going on with the new baseball. We probably should be saying it more than we have been: MLB intentionally changed the baseball this year, and Spring Training featured only a mix of new and old baseballs. Now it’s all new.

•   Shelby Miller got another mop-up inning, and it’s hard to judge in that situation – he’s in there to just fire strikes – but not a single swing and miss over 25 pitches. I didn’t see a lot of command, either. Just kinda chucking up 95 mph fastballs, which won’t be enough for him to have big league success when it counts.

•   A random thing to note about last night, because it wasn’t just Davies or Miller or even just the Cubs – it seemed like every pitcher had a really tough time with control. Even Alec Mills was constantly up with his sinker. I was reminded of something I’ve heard so many times over the years from command/control types who pitch at Wrigley Field: when the wind blows in hard (at the pitcher’s back), like it was last night, it can have a counterintuitive impact. Specifically, it can reduce movement on pitches – pitches that, because they aren’t high velo, have more time to have their erstwhile movement altered – which not only means they’re harder to locate where you want, but also come in “straighter.” Note that Davies’ sinker averaged about a half-click in velo over his season average to date, despite it being quite cold out. That extra little push from the wind hurts some guys more than it helps.

•   Mets hitting coach Chili Davis, who has generally been a successful coach wherever he’s gone except when he was the hitting coach with the Cubs in 2018, isn’t necessarily bitter over how poorly things went, but you can tell he still feels like the blame lies with the players who wouldn’t get on board with him, and not the other way around:

Davis maintains its nothing personal with the Cubs — though sometimes he wavers:

"What I saw what went on over there, I voiced it. I voiced it to leadership before they fired me. There's some good guys over there…I want to beat them. Probably as much as any team." 2/2

•   At the time, it was easy to say Davis just failed to connect with the Cubs’ young hitters, and that was his issue. But as we’ve generally seen some guys fail to adjust and develop their offensive game at the big league level, you certainly start to wonder just how much of it was Davis failing to adapt, and how much was a group of hitters who had early success being unwilling to listen.

"It's almost like they dreamed themselves out of what we see every day. And they already see the future.”

A group of West side teens dreamed it. How Jason Heyward and a group of other athletes helped make it happen in a hurting community.

•   The Padres finally got Dinelson Lamet back last night, but it didn’t last long, and it’s possible that the last six months have just been delaying the inevitable:

The Padres traded for Blake Snell, Yu Darvish and Joe Musgrove this winter well aware that Dinelson Lamet’s arm was problematic. It’s always easy to second guess — why didn’t he get surgery last year? — but rehab often can delay the inevitable and some players prefer that route. https://t.co/lsX8VJs1it