What to Do About Heyward, How You Land an Ace, Weird Groundout, and Other Cubs Bullets Skip to content 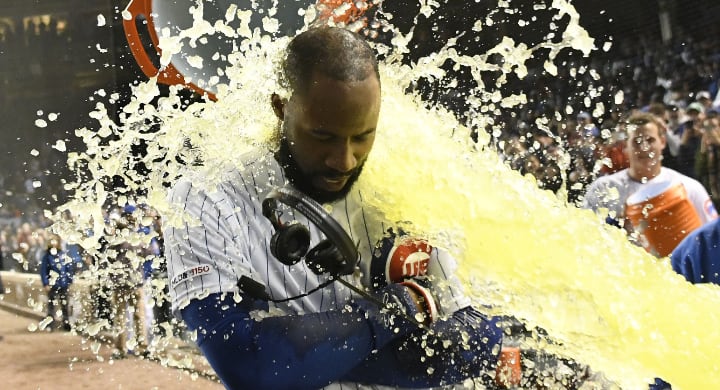 Had me a monster hankering for a REALLY good cinnamon roll yesterday, and I don’t really know a great spot in my area to get one. In Chicago, I get Ann Sather with regularity, but in Columbus, I’ve not found a cinnamon roll that even comes close. I need to search again. I wonder how hard it is to make your own extremely good cinnamon rolls …

•   This is a must-read over at Baseball America on the culture of a baseball front office, and where your process can give you an edge, with input from baseball execs and also execs in other industries. I’m devouring it. Of particular interest to Cubs fans? There are large sections on the Cleveland Indians scouting and development process during the period of time when Carter Hawkins, now the Cubs GM, was working in scouting and player development for the Indians. I am loving that insight.

•   For example, how do you land an ace like Shane Bieber in the 4th round of the draft? Well, it’s a combination of a lot of things:

Mark Allen remembers his first impression of Shane Bieber in 2016 as a junior at UC Santa Barbara: solid pitcher’s frame, a clean, repeatable delivery and fastball command that “could hit a gnat in the ass.” Bieber was a stalwart for the Gauchos that season, pitching 134.2 innings in 18 starts and walking just 16 batters. But Bieber lasted until the fourth round of the 2016 draft because of what he lacked: premium velocity (his fastball sat mostly 89-90 mph) and a big league-quality offspeed pitch.

“I liked the delivery. I liked the way he moved. But his breaking ball wasn’t very good and his changeup he threw too hard,” said Allen, who was then a pitching crosschecker for Cleveland and is now the pitching coach at Illinois. “In my report, I remember saying ‘That sucker’s navigational skills with a heater (are) well above-average. But by the time he got to the fifth inning, his GPS started glitching.’ He started running out of gas. I wondered how good of shape he was really in.”

Upon drafting the 6-foot-3 righthander, Cleveland’s player development staff went to work with Bieber on a development plan. Over the next two years, Bieber scrapped his fringy slider for a spike curveball to give him a pitch with depth. With the benefit of Trackman data, they developed a curveball with a spin axis that almost perfectly mirrors the axis of his fastball, so hitters struggle to identify the pitch based on spin direction. With Bieber’s natural repeatability, he could maintain consistency of that axis to help create one of the nastiest breaking balls in the game.

Bieber and the team also went to work on the pitcher’s body, transforming him from a college kid with a thick lower half throwing 89-90 mph to the future big league ace averaging 94 mph.

•   There’s a lot more from there, with an emphasis on organizational communication and culture. A big part of what I see there in how you land an ace in the 4th round? You have to be able to envision what the young pitcher COULD be if you attack the right things (because you aren’t gonna get a guy who already has it all). You have to be able to see upside where others might see only floor (that scouting report on Bieber sure reads like a guy with a high floor, but very little upside). You have to be able to get the player on board with significant changes, you have to successfully implement all those things, and then the player himself has to actually make it all happen (to be sure: the player’s work and ability is the most important part of this! The Cubs couldn’t turn you or me into a big league ace). That takes such an incredible relationship between all the layers of your organization, working together in lock step – from scouting to drafting to technology to weight room and on and on. You aren’t going to hit on any huge “wins” without all of that working together, and that’s where the communication and culture come in.

•   Here’s hoping the arrival of Hawkins (and Dan Kantrovitz before him), coupled with the scouting and player development changes the Cubs have made over the past two years, will allow them some big wins in the years ahead. It can happen quickly, too: Bieber was drafted in 2016 with so much to work on, and just two years later, he was throwing over 100 useful innings in the big leagues. The next year he was an ace.

•   The latest DraftKings promo code can unlock up to $1,280 in bonuses with boosted odds and a deposit match, so heads up for those of you who play.

•   A stray note from the Sharma/Mooney chat at The Athletic: Mooney indicates that he was hearing, before the lockout, that “it sounded like the Cubs were planning to use (Jason) Heyward in a more limited role, appreciating his value in the clubhouse and hoping that he could return to his offensive levels from 2019 and 2020.” As we’ve discussed for years now, there’s almost never a good reason to start Heyward against a lefty, and even against righties, the Cubs are going to have to become increasingly judicious about which guys he faces, both because the offense may be in steeper decline and because the glove is probably no longer elite.

•   I tend to think it’s fine to give Heyward the first half to show he can contribute in a limited, bench-adjacent role, but here’s the challenge he and the Cubs are going to face: the Cubs have a ton of other “let’s see how they do” outfield options besides Heyward.

•   At this point, you want to start Ian Happ nearly every day. You want to see if Rafael Ortega can keep raking against righties. You want to see if Michael Hermosillo is putting it together. You want to see if Clint Frazier can break out in a new organization. You want to see if Harold Ramirez can translate some great metrics into great production if he has more playing time. You might want to move Nico Hoerner around, including into the outfield. Eventually, you might want to give Brennen Davis regular starts. And what if Nelson Velazquez shows his AFL breakout was only the beginning? What if Greg Deichmann turns the corner? And, the biggest what-if of all: what if the Cubs add an outfielder in Offseason Part Two? There are a TON of options still out there, and the Cubs might be able to go bargain-hunting on a regular (or maybe they land Seiya Suzuki).

•   All of that is to say, it’s fine to think in the abstract that you want to give Heyward a little runway to emerge as a useful 50% starter, but how long can that leash really be? How are you going to answer all those other questions if you don’t give guys playing time? Heck, how are you going to manage all the roster spots if Heyward is taking one? It’s a challenge, some of which will organically get sorted out in Spring Training and early in the season, but if (1) Heyward isn’t clearly contributing to winning, *AND* (2) the Cubs aren’t clearly competitive in the first half, then I think you have to be giving younger guys more playing time.

•   A heads up for anyone who has wanted to get AirPods: they are on a huge sale at Amazon right now. This is an #ad, but also, I could not function without mine. I never thought I’d be that person, but it turns out, in a house full of kids, the ability to pop those in and watch what I want to watch or just get work done … it’s key.

•   This was an enjoyable thing to randomly remember:

I just remembered one of the weirdest groundouts you'll ever see. pic.twitter.com/IXjgqkn7rP

“Just hit a groundball to the left side. It’s not hard to beat the shift” https://t.co/AJeNfxjkL7