Heyward Willing to Play CF, Who Closes for the Cubs, Bauer, Minors Lawsuit, and Other Cubs Bullets Skip to content 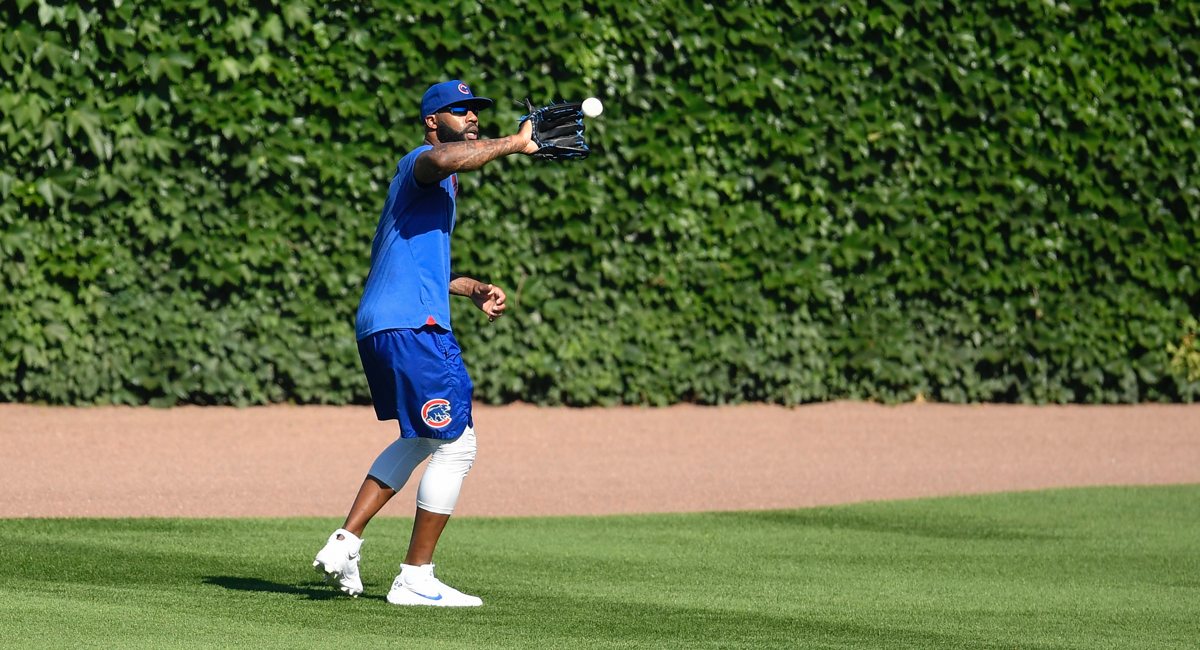 Finally recording a new episode of ‘Onto Waveland’ (it’s the podcast I do with Sahadev Sharma and Patrick Mooney) after months of being locked out (not literally, but, well, effectively), and then a week of trying to coordinate schedules of people in three different time zones covering different aspects of the sport exploding back into life. It’ll be good to get back on the mic. If you want to check it out, our regular schedule will resume soon – twice a week – and you can find it wherever you get your podcasts.

•   Jason Heyward is willing to move to center field to accommodate Seiya Suzuki, who is believed to be best deployed in right field:

In 2019, Jason Heyward moved to center field to accommodate the addition of Nick Castellanos. With the Seiya Suzuki signing looming, he's willing to move out of right again.

•   I think that’s a fine and admirable offer – sincere, too – but there are a couple things to keep in mind. For one, Heyward would have to get back to actually hitting righties well in order to justify even thinking about keeping him semi-regularly in the lineup against righties in center field (where you could otherwise deploy, for example, Rafael Ortega, who destroyed righties last year). For another thing, Heyward hasn’t played any center field since 2019, and he rated out a little below average. If he could still be a little below average out there, that would probably be fine from a defensive perspective (Ortega and Ian Happ, as other options against righties, wouldn’t necessarily be better defensively), but I don’t know after three more years of aging.

•   That is all to say: good to know that Heyward might be a part-time option in center field for the Cubs, but it should be considered far from a sure thing that, even if Suzuki is the regular right fielder, Heyward is the best option against righties in center field. (And against lefties, you DEFINITELY wouldn’t want Heyward in there, both because he hasn’t hit lefties in years and years, but also because that’s where I’d like to see Michael Hermosillo getting every start, if he makes the team.)

•   Cubs reliever David Robertson, one of MANY new additions this week, on signing with the Cubs (Cubs.com): “It’s a good fit for me. It’s a strong team. It’s a great city. I’ve lived in Chicago before. I just thought that I could mix in here and probably pick up some late innings in the back end of this ‘pen. They were very convincing.”

•   To that point, Robertson is one of many theoretical back-end options for the Cubs in the early part of the season. I tend to think David Ross is not going to NAME A CLOSER to open the season, but instead there will be a couple guys who might get the 9th depending on how the game has shaken loose, with a particular deference to one guy or the other. Robertson obviously has closing experience, albeit pre-injury and a bit in the past. Mychal Givens has done some closing over the last few years. Rowan Wick has closer stuff. I think Manny Rodriguez, if he makes the big league team, will work in earlier innings. Chris Martin is more of a middle/setup type. Keegan Thompson, I would argue, could have the stuff to be dominant in a one-inning role, but he might be even more valuable to the Cubs in a multi-inning role. This is just gonna have to shake loose over time.

•   Speaking of which, FanGraphs looked at a trio of Cubs recent relief signings – Robertson, Givens, and Daniel Norris – and I think appropriately sums up the “hey, they could be good or maybe not but let’s find out” nature of not only these signings, but the entire 2022 Cubs enterprise. Among their comments:

[Norris] mixes a low-90s fastball with a slider and changeup exactly the way you’d expect – he’s mostly fastball/slider to lefties and fastball/changeup to righties. Both of his secondary pitches miss a ton of bats; he’s always run solid strikeout rates despite the aforementioned middling fastball.

Will his control rebound enough to put together another solid season? I have no idea, and the Cubs probably don’t either. But he might be great, and he’ll certainly be serviceable, and if things work out well he might fetch a prospect at the trade deadline.

Robertson is even more of an enigma. After a long string of effective years of relief, things have fallen apart for him recently. He blew his elbow out in 2019, missed all of 2020 rehabbing, and only got a major league job after pitching well for Team USA at the Olympics. He struck out 32% of his opponents in a brief stint in Tampa Bay, threw four scoreless innings in the postseason, and hit free agency.

Robertson lives or dies with his cutter, which he throws 75% of the time. He complements it with a two-plane curveball that hitters simply can’t pick up; the pitch sports a career 20.6% swinging strike rate, which is downright outrageous. At 36, he’s one elbow injury or velocity decline away from looking quite ordinary – but he looked excellent last year, and the money is certainly right from Chicago’s side to take a chance on him and see what they find.

Givens walked 12.5% of his opponents between stops in Colorado and Cincinnati last year, and looks far removed from his peak years in Baltimore. But – stop me if you’ve heard this before – he still throws hard, and his fastball/slider/changeup pitch mix gives him the tools to attack lefties and righties, and he misses a ton of bats when he’s right. Will he be good this year? I have absolutely no idea. But if the alternative was some non-roster invitees and career minor leaguers, I like the idea of trying to catch lightning in a bottle with three pitchers who have shown they can put up good numbers at the major league level.

•   If you want to get into sports betting during the NCAA Tournament, make sure to check out the best March Madness promos we’ve collected right here.

•   Scott Effross throws wiffleballs out there, with his sinker and his slider pairing together perfectly, each breaking hard in opposite directions. Here’s the slider from yesterday:

•   Trevor Bauer’s administrative leave has been extended through April 16. I understand there is an investigation ongoing by MLB, but at some point the league has to stop punting and just issue its decision/punishment. Whenever that does happen, it seems pretty likely it will be retroactive (i.e., Bauer will have “already served” his suspension from last July through whenever), and then the clock will immediately start ticking on what the Dodgers decide to do.

•   In other words, Rick Hahn made it pretty plain last fall that the White Sox were going to trade Craig Kimbrel, but then, well, things happened:

Craig Kimbrel on if he's surprised to still be with the White Sox: "I think we had discussions toward the end of last year and it kind of looked like that's where it might have been going. But here we are for multiple reasons. I'm here to get ready for the season and do whatever

•   It still seems possible that a Kimbrel trade will come together over the next couple weeks, maybe especially after Kenley Jansen signs. Kimbrel, man. Dude has had ONE normal-ish Spring Training in the last four years.

•   A significant case about minor league pay and jobs continues to wind its way through the courts in California (appeals will be forthcoming), and there could also be legislation in the state that aims to blow up the whole developmental system:

Judge rules minor league players are MLB employees throughout year and are owed damages, including $1,882,650 in California https://t.co/cIdEjIudnN

I spoke with California Sen. Josh Becker about the legislation he plans to introduce that would upend/reform (word choice dependent on your POV) MLB's player development system and create minor league free agents after four years instead of seven: https://t.co/WrEq3qA4le

•   It seems highly likely to me that, if that bill were actually made law in California, MLB organizations would pull their minor league teams out of the state rather than risk losing their minor league players after just four years (compared to every other org, which would get upwards of seven years). Still, this is definitely worth tracking now.

•   This is a pretty interesting random data pull:

•   Inflatable mattresses, puzzle boxes, eye masks, and more are your Deals of the Day at Amazon. #ad