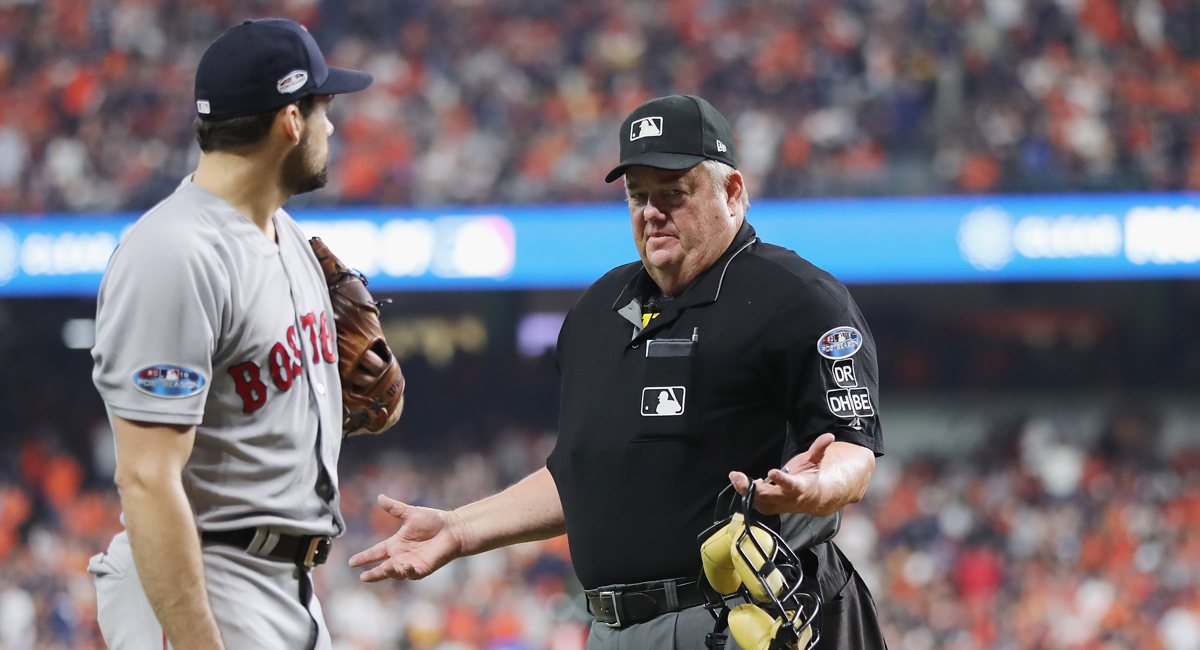 MLB has an officiating problem, but is it as bad as it seems to the average viewer? Also, Clayton Kershaw and Kevin Gausman are having historically good starts, the Reds are doing the opposite, and much more in today’s MLBits.

Angel Hernandez is Bad, But How Bad is he According to MLB?

After the Angel Hernandez debacle during the Phillies-Padres game last week, many (once again) wondered how MLB tolerates these types of performances by their umpires?

Now retired villainous umpire character Joe West had this to say to Passan about the highly scrutinized Hernandez performance:

“The whole story was blown out of proportion because some media source said he scored 85,” said Joe West, the umpire who retired last year after a record 5,460 games. “He didn’t score 85. He scored 96. If they’re not using the same grading system that the umpires are being graded by, they can’t question what he calls.”

That’s because MLB’s auditing team gave Hernandez a 96.12 adjusted score for that game, a significantly better mark than many of the public umpire auditing entities gave Hernandez. Passan explains the way that Major League Baseball truly grades their umpires in his latest feature at ESPN+:

It didn't make sense. The strike zone you see on TV, on here, is completely different from the one MLB uses to grade umpires. Why?

I looked into it for ESPN+ and came away with previously unreported details on how balls and strikes really work in MLB: https://t.co/L8aO4F1pE0

The Reds Have Endured a Brutal Start to the Season

“I’m not going to pile on, but that sums up the Reds season so far this year…”

After today they'll be 3-19 this season pic.twitter.com/3BYB2ISqaD

The Cincinnati Reds are off to a 3-19 start and struggling big time. Joey Votto is hitting just .122 with 29 strikeouts in 22 games played this season, and the Reds as a team own a league-worst 67 wRC+ offensively, and they’re hitting just .201 as a team.

The Reds let 2021 regulars Tucker Barnhart, Jesse Winker, Eugenio Suarez, Sonny Gray, Amir Garrett, Nick Castellanos, Wade Miley, and Michael Lorenzen leave via trades or free agency. They’ve now gone from a Wild Card contender to the front-runner for the top pick in the 2023 MLB Draft in seven months. The Reds own a -1.8 fWAR, and their hitters are striking out at a 25.2 percent clip (tied for the third-worst in MLB).

The pitching hasn’t been much better, with Cincinnati pitchers owners of a league-worst 6.19 ERA and a league-worst 5.03 BB/9. The long ball has been down in baseball’s first month of the 2022 season, but if you’re a Reds fan, you’ve seen plenty of them … for the opposition. Cincinnati owns a 1.11 HR/9 (tied for the fourth-worst mark in MLB). Rookie Hunter Greene joined the big club this season, but the second-overall pick in the 2017 MLB Draft has sputtered out to a 1-3 start with a 6.00 ERA in four appearances this season.

Last year’s rookie of the year, Jonathan India, has been limited to just 11 games with a hamstring injury that has landed him on the IL twice, and Nick Senzel is hitting just .208 in 16 games in what was supposed to be a crucial year for the once-lauded prospect. Anything that can go wrong for the Reds this season has, and it doesn’t look like it will get much better as we flip the calendar to May.

Clayton Kershaw’s 2,697th strikeout moved him ahead of Don Sutton on the Los Angeles Dodgers’ all-time strikeout leaderboard this weekend. Kershaw now ranks third among starting pitchers who have played for only one franchise, with 2,700 joining some elite company with only Bob Gibson and Walter Johnson ahead of him.

Kershaw is off to a solid start this season, posting a 2.35 ERA with a 0.70 WHIP and 30 strikeouts in four starts.

Most strikeouts in MLB history by pitchers playing for only one franchise:

Kevin Gausman is off to a pretty good start this season. In fact, he’s sharing some historical parallels with Cy Young, according to MLB Stats:

Kevin Gausman joins Cy Young (1906) as the only pitchers (min. 20 IP) to begin a season with 5 straight starts of 0 BB and 0 HR allowed in the World Series era (since 1903)! pic.twitter.com/2YvmsdJjoO

Gausman has allowed just eight earned runs in his first five starts for the Toronto Blue Jays, good for a 2.27 ERA, and that’s not even close to his best numbers in the first month. Gausman has struck out 41 hitters (11.65 K/9), walked zero across 31.2 innings of work, and owns a sparkling 0.50 WHIP.

According to Codify, no pitcher in any span of five starts has ever struck out that many batters without allowing a single walk or home run:

No pitcher in major league history in ANY span of 5 starts has struck out this many batters without allowing a home run or walking a batter. Absolutely insane, @KevinGausman! https://t.co/5cPCazSTO2

Gausman is also the only pitcher ever to throw 30 or more strikeouts while allowing zero walks and zero home runs in a full month of the season.

30+ strikeouts, 0 walks, 0 homers allowed by an MLB pitcher in a full month:

•   The New York Mets continue to show they’re serious about winning, and money won’t stand in their way as they designate veteran Robinson Cano for assignment this afternoon even though they will eat a substantial amount of money for Cano to play elsewhere:

The Mets are eating big money to close the books on a disastrous trade for a player once on a Hall of Fame track:https://t.co/4RTrl9BA20 pic.twitter.com/GjVB6cHt3p

•   The Texas Rangers optioned Willie Calhoun this weekend, but the 27-year-old outfielder was not a fan of the move despite owning a 75 wRC+ in 18 games with Texas this season:

Willie Calhoun did not take kindly to being optioned to the minor leagues. In order for either party to get what they want in a tough situation, it all comes down to performance. #StraightUpTX https://t.co/Nn17YSsyCp

•   Pittsburgh’s Anthony Alford is another late-twenties outfielder who will be searching for a new home and could benefit from a change of scenery:

•   The resurgences of Anthony Rizzo and Eric Hosmer have been two of the biggest surprises in baseball’s first month. Sports Illustrated’s Tom Verducci dives into the hot starts of Rizzo, Hosmer, and more surprised from April:

Eric Hosmer and Anthony Rizzo are among the best hitters in MLB right now.

Tom Verducci’s biggest surprises from the first month of the season: https://t.co/SU41MPsyZf

•   Jayson Stark recaps a wild one in Tampa Bay and much more in his latest column over at The Athletic: