Did the Bears Underestimate the Risk in Not Having Regulars Participate in the Preseason? Skip to content 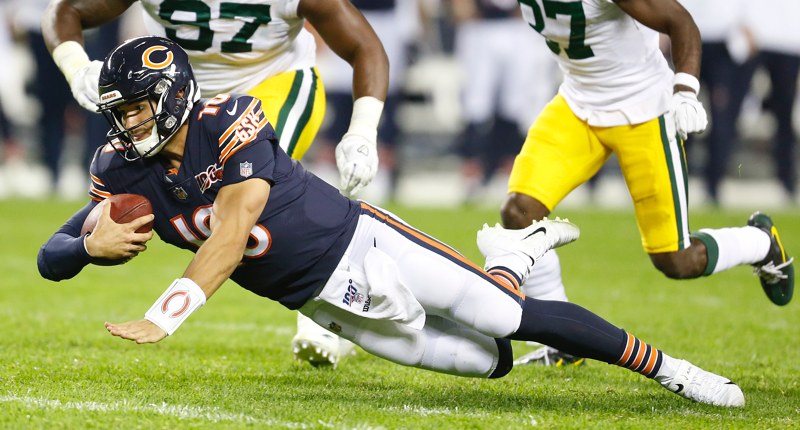 Matt Nagy’s decision to rest starters and regulars during the final two preseason games leading up to the *2018* regular season proved to be a prudent move, as it kept key cogs healthy for the start of what turned out to be a successful, 12-win season.

One year later, Nagy took that strategy a step further – keeping all of his starters and regulars off the field during the preseason – but after a putrid offensive start, the decision is coming under fire. Because even though Nagy was ultimately successful in his goal of keeping the regulars healthy — which could, theoretically, bear fruit down the road in the grand scheme of things — it is fair to wonder if we underestimated the risks of resting in the preseason.

NFL analyst Brian Baldinger believes the Bears missed a handful of pristine opportunities to extend drives by moving the chains and gain chunk yards with big plays, potentially because of a lack of preparation that stemmed from a dismissal of the value of playing regulars during the preseason. Baldinger diagrams some of those occasions below:

.@bears missed too many golden opportunities for big plays or to keep drives alive. When you don’t play in preseason, execution suffers. #BaldysBreakdowns pic.twitter.com/GlERShoIBF

Baldinger theorizes that the Bears’ offensive execution took a hit because it did not play in the preseason, and I suppose he could be onto something. An offensive line that ranked among the best in the league last year and projected to be a strength again coming into 2019 looked out of sync the whole night. It looked as if it was the first time that unit played together. And while that wasn’t actually the case, it was the first time this group played with James Daniels at center and Cody Whitehair at guard.

The major offensive line position swap did not look like it paid dividends early as a leaky line contributed to Mitch Trubisky’s shoddy play – having less time to throw ended up wrecking the rhythm and timing throughout the offense. There was a mess on the offense at every turn, so much so, it was easy to point at a lack of a preseason as a factor in the Bears’ offense stumbling out of the gate.

Mark Potash of the Chicago Sun-Times went a step further, highlighting some performances of quarterbacks who played (and didn’t) in the preseason:

Some early results on the preseason snaps issue. Will be updated if it continues to fit my narrative: pic.twitter.com/d8R0K70B73

There are some notable differences between those who participated in preseason and those who didn’t. Though, this list isn’t totally comprehensive. Frankly, it would be unfair to ignore Baker Mayfield and Jameis Winston stumbling out of the blocks despite extensive preseason work. But overall, it feels as if the preseason did more good than harm to quarterbacks ahead of their respective Week 1 matchups. To be clear, it’s just one game and against very different defenses. But still … the point stands.

It is possible a bit of preseason work could have possibly worked off some of the apparent rust and ironed out some kinks along the way. Remember, the Bears’ first-string offense ran 50+ plays in the 2018 preseason. That group came out like gang-busters in the first half and delivered some haymakers before losing their way in the second half. And even though the Bears lost in Week 1 in 2018, at least there was something to hang your hat on from an offensive perspective. There was none of that on Thursday night.

Chicago’s head coach stands by his decision, noting to the Chicago Tribune that the defense (which also sat out preseason action) performed very well. But he also said (via WGN-TV) it was fair to criticize his coaching tactics leading up to Week 1. Moving forward, Nagy needs to weigh if Week 1 rust is a reasonable price to pay to keep a team’s most important players healthy for games of consequence (that’s certainly a tricky balance).