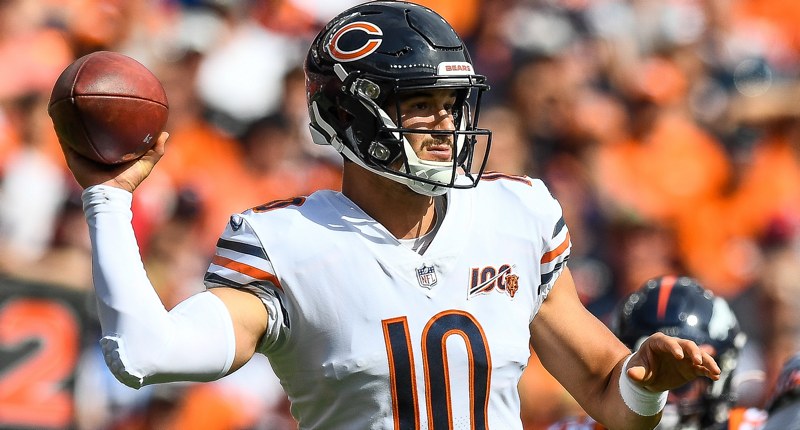 The Chicago Bears offense has sputtered out of the gates, scoring just one touchdown on 22 offensive possessions through two games. And while we could justifiably point to (1) Matt Nagy’s play-calling, (2) generally undisciplined play (penalties), and (3) an offensive line that’s had one awful game and one good one, there’s one other, main reason behind Chicago’s offensive problems: Quarterback Mitch Trubisky has taken a notable step backwards in his development.

ESPN’s Kevin Seifert uses data compiled from ESPN’s Stats & Information department and NFL’s Next Gen Stats to break down what is happening at the quarterback position, and he circles Trubisky as the league’s most concerning quarterback through two weeks.

Based on the numbers and Trubisky’s performance, there’s not much of an argument for it to be anyone but the Bears’ QB1. Because while we already know Trubisky has completed just 58.3 percent of his passes (and has yet to throw a touchdown this season), that’s just the tip of the iceberg.

Seifert points out the simplification of Matt Nagy’s game plan for Trubisky, which included 33.3 percent of pass attempts that did not travel beyond the line of scrimmage. There’s nothing wrong with easy passes that are intended to get a quarterback in rhythm early, but it is problematic when those plays aren’t being made.

According to NFL Next Gen Stats data, Trubisky had 40.7 percent of his targets land in the “wide open” category in which no defenders were within five yards of the intended target. And while Trubisky completed one pass that traveled 10 yards beyond the line of scrimmage (the big one that set up Eddy Piñeiro’s game-winning field goal), there were seven other throws that fell incomplete.

Pro Football Focus’ data doesn’t paint a pretty picture either. Trubisky is the analytics giant’s fourth-lowest-graded quarterback, with his throwing accuracy proving to be his major issue. Nearly 29 percent of his passes have been graded as “uncatchable” by the site, which is the second-worst percentage in the league. And to piggyback on what NFL’s Next Gen Stats showed about Trubisky’s troubles, PFF grades Trubisky as the worst thrower when targeting a receiver with a step or more of separation and has just a 6.7 yards per attempt average when throwing those passes. It all boils down to this: there isn’t an area in which Trubisky is excelling right now under center.

I am not even sure where to begin in venting my frustrations in Trubisky not making the simple plays, but that it was so prevalent only goes to show that he has regressed during a time he should be moving forward.

Now, this isn’t to say Trubisky cannot make adjustments and get the offense going in the right direction. But he clearly has a lot more work to do to get where he wants to go, because he simply isn’t making the easy plays in front of him right now.