Oh, So Jordan Howard *DOES* Have a Place in This Offense Skip to content 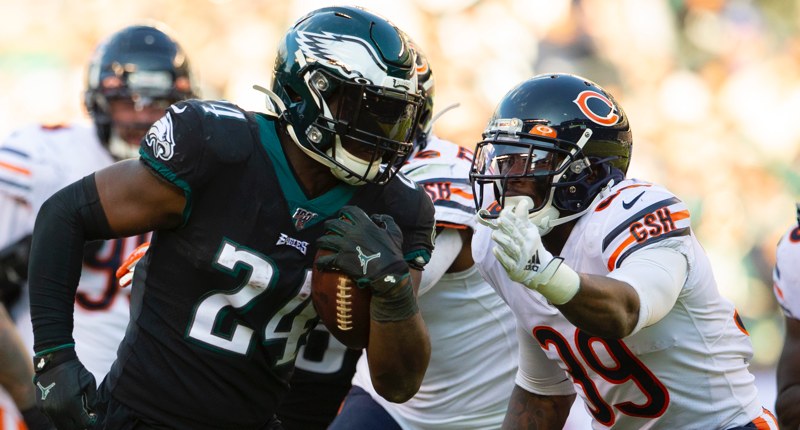 Not literally, unfortunatly. Though, it may as well have been. Indeed, I reckon Howard had fun during the Eagles’ 22-14 win over the Bears on Sunday, when he ran the ball 19 times for 82 yards and a touchdown.

Howard ran hard, downhill, efficiently, and effectively. It was the type of game we had grown accustomed to in the second half of the 2018 season, when Howard delivered body blows to opposing defenders before putting wins on ice. Howard reprised that role on Sunday, only this time for the Eagles.

And his performance dispelled any notion that Howard wasn’t a fit in Nagy’s offense, which is similar to that of Eagles Head Coach Doug Pederson because both are derivative from the Andy Reid system. If anything, it proved that Nagy has been going about handling the running back’s room all wrong (gasp!). For example, look back on how Howard, Miles Sanders, and Darren Sproles were used in Pederson’s offense.

Howard was a featured back who could run between the tackles, get the gritty yards, and pick up gains with one-cut runs every now and again. Sanders was more of a do-it-all back, who showcased his abilities as a rusher, but was also a threat as a pass-catcher, displaying legit speed and play-making ability in the open field. Sproles, meanwhile, is the same player he’s been his entire career: a nightmarish mismatch who must be accounted for at all times. No, the Eagles didn’t have anyone go off and run circles around the Bears’ defense. But those guys played their role right en route to a win.

In short, Howard exposed Nagy’s running game for what it wasn’t. But also provided a glimpse of what it should be.

Finding the Sanders type is the challenge at this point. It sure as heck isn’t Mike Davis, who played zero offensive snaps for the second time in three games. In fact, Davis has appeared on just 31 offensive snaps since Week 1. The Bears are paying $3 million to a third-string running back who isn’t even seeing the field. I’m not sure whether it is worse that the front office prioritized the signing of a RB3 or that he isn’t on the field, but neither answer is going to be satisfactory for me.

Naturally, this brings us back to a pretty notable decision the Bears have to make by week’s end.

As things stand right now, Davis’ presence on the roster is keeping the Bears from snagging a fourth-round compensatory pick in the 2020 NFL Draft. Last week, we explained how cutting Davis before Week 10 would allow for the Bears to pick up a much-needed draft choice when it previously would not have existed. This should be a no-brainer decision for a Bears team that needs to do everything in its power to recoup whatever draft capital it can. Remember, the Bears don’t have picks in the first or third rounds in 2020 because they are going to the Raiders as part of the Khalil Mack trade. And their 2020 fourth-rounder is already in possession of the Patriots, which was the compensation for trading up to draft Montgomery. (Aside: Seriously, what’s with this extra spending for players who get such little usage? What gives!?)

The Bears can’t go back in time and un-do the Howard trade or the Davis signing. But that doesn’t mean they can’t right a wrong. And yeah, cutting a player you signed to fill a hole 10 weeks into the season isn’t ideal. But biting the bullet now and getting a draft pick is fair compensation for what would otherwise be a lost cause.