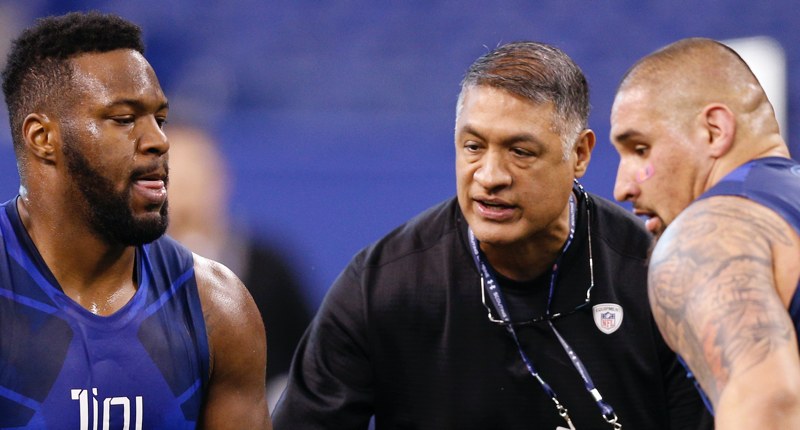 The Chicago Bears ended the 2019 season firing a handful of assistant coaches. So at some point before the 2020 campaign kicks off, the Bears will fill those vacancies with new coaches who will bring new voices and perspectives to a locker room that could use a boost. First up, Juan Castillo, the team’s first offseason hire.

Not that the Bears were lacking experience when they had Harry Hiestand coaching the offensive line, but it is notable that Castillo’s time as a coach in the NFL spans three decades. That’s impressive. Castillo’s best work came in Philadelphia while he was working for Andy Reid, which is where he crossed paths with Bears Head Coach Matt Nagy. Funny how things work out that way. Evidently, that experience was a good one because Nagy has brought Castillo on to straighten out some of the kinks in the offensive line.

The Bears entered the year with a returning unit that was projected to be among the NFL’s best. Instead, regression occurred across the board. Tackles Charles Leno Jr. and Bobby Massie did not play nearly as well as they had in previous years. And the guard-center switch between James Daniels and Cody Whitehair was enough of a problem to push the team toward moving both of those players back to the positions they played last year. To be clear, the Bears’ offensive line issues shouldn’t fall entirely on Hiestand’s shoulders – not when the unit spent most of the year with a converted nose tackle at right guard and the six games with a backup right tackle. So … why hire Castillo? Because perhaps the time for a new voice in the room had come. Other than that, I imagine Castillo’s time as a run-game coordinator for the Ravens and Bills helped his cause.

In addition to Castillo’s previous work as an offensive line coach, his time as a run-game coordinator is noteworthy. Ray Rice made the Pro Bowl in 2012, rushing for 1,143 yards and nine touchdowns for the eventual Super Bowl champions. Rice’s excellence on the ground allowed Baltimore’s play-action game to flourish under Joe Flacco. Meanwhile, Castillo’s time in Buffalo featured strong running years from LeSean McCoy (1,138 yards, 6 TD in 2017) and Josh Allen (led the team with 631 rushing yards and 8 TD). Bringing those types of concepts would be a welcome addition to an offense that didn’t excel in those areas last season.

Then again, the Bears are taking a calculated risk in bringing on Castillo. That this is his third NFL gig in five years is something of a red flag. And I can’t totally get past how Buffalo’s running game was even better in 2019 than it was in 2018 — especially since the Bills’ running backs thrived with offensive coaching changes that occurred in the wake of his departure. Maybe Castillo’s knowledge of the Andy Reid style of offense Nagy wants to implement in Chicago will bring results. We are months from finding out what changes are coming and if they’ll work. But hey, at least the Bears have an offensive line coach in place to help dig the offense out of its rut. Grab a shovel, coach. You’ve got some work to do.