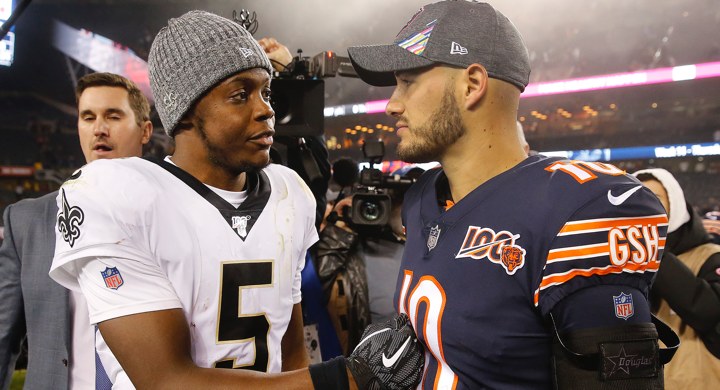 WOW. HERE WE GOOOOOO. This feels like more than the “competition” we kept hearing about …

Moreover, as we speculated this morning, it’s on the kind of deal that would lead you to believe the Bears think Bridgewater *IS* their new guy. Per PFT: “The initial numbers floating around (something in the range of $21 million per year) suggest that Bridgewater would be installed as the No. 1 option in Chicago.”

Obviously Bridgewater, just 27, is one of those extremely rare possible “quarterbacks of the future” you can land in free agency. You don’t get too many opportunities like this. Bridgewater was 5-0 standing in for Drew Brees last year, and, prior to a serious knee injury – one that threatened his career – he had the pedigree of a top first round pick.

Luis took a deeper look at Bridgewater earlier this offseason.

If Ryan Pace is Truly Searching For His Next Drew Brees, Perhaps He Should Look at Teddy Bridgewaterhttps://t.co/brZba5hPZ5

Ryan Pace and Matt Nagy have spent the offseason “committing” to Mitch Trubisky, while also repeatedly invoking the idea of “competition.”

Certainly, if they were to land Bridgewater on a deal for starter money, it might be a little more than “competition” for Trubisky.

UPDATE: This is real, but it also isn’t over:

#Bears are working to make a deal happen with Teddy Bridgewater. #Bucs have also expressed interest.

Tom Brady could play a role in it all. If Brady goes to #Chargers or stays with #Patriots, Tampa might emerge as frontrunner for Bridgewater.

Many think that Brady is actually down to New England and Tampa Bay as it is, so, you know, if you want to see the Bears land Bridgewater … go South, Tom!

I believe the #Buccaneers plan is to pull out the stops for Tom Brady. Beyond that, a #Saints source is convinced Teddy Bridgewater is a target in Tampa if Brady doesn’t happen. Saints believe in Teddy. But they also love Taysom’s ceiling. With Brees back, options were limited.

I presume the Bears are trying to lock this thing down before Brady’s decision has any sway in the matter, especially now that the word is out.

UPDATE 3: Well, this is something of a gut punch followed by an eye-poke:

Not expecting Teddy Bridgewater to land with the #Bears. Other QB options in play there.

And from hearing from a few teams and other sources, Teddy Bridgewater is not expected to sign with them even if they don't get Foles. https://t.co/gkQDS5dQkT