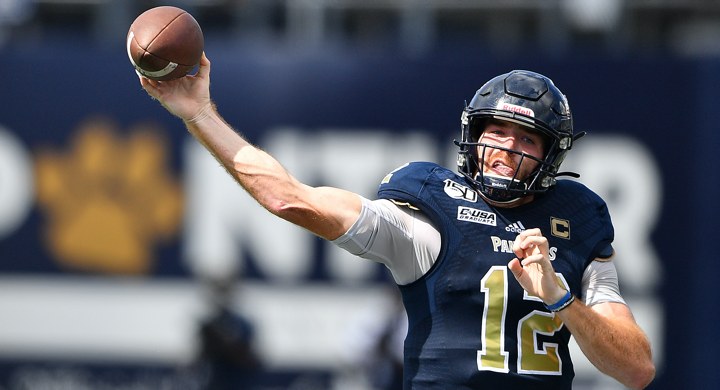 One month from today, the Chicago Bears are scheduled to be on the clock with the first of two second-round picks in the 2020 NFL Draft.

And although selecting a developmental quarterback as soon as the second round is awfully enticing, the Bears continue to be connected to a signal caller who could be had later in the draft:

Aaron Wilson of the Houston Chronicle reports the Bears are one of more than a half-dozen teams doing “extra homework” on Florida International University quarterback James Morgan.

And with good reason. As Wilson reports, an NFL area scout said Morgan “has one of the three strongest arms in the draft” while also sharing praise for his football IQ and leadership skills. I AM *NOT* A SCOUT, but I feel as if intelligence, leadership, and arm strength are the three most important things a good quarterback possesses. So if Morgan has this going for him, Chicago’s front office is doing the right thing in doing as much vetting as they can during this pre-draft process.

Morgan enjoyed a break-out 2018 campaign (26 TD, 7 INT, 65.3 completion pct.) in which he won the Conference USA Newcomer of the Year award, but saw his production and efficiency drop as he was hobbled by an ankle injury for most of the 2019 season. All things considered, Morgan should be viewed as an intriguing prospect for a team that should be looking to continue adding to its quarterbacks room.

Remember this: NFL teams and scouts are currently prohibited from conducting visits or private workouts because of travel restrictions that have been placed as preventative measures to stem the spread of COVID-19, but that doesn’t appear to be keeping teams from gathering what information they can via other avenues. Perhaps the Bears being part of a group of teams relentlessly pursuing information on a prospect like Morgan can pay off down the line.

For what it’s worth, the Bears already met with Morgan at the East-West Shrine Game. That’s when the Florida International product opened eyes and put himself on the draft radar. Since then, his stock has been on the rise. In early March, Eric Edholm of Yahoo! Sports tweeted the Bears were among the teams appearing to show the most interest in Morgan, who was receiving comparisons to Kirk Cousins at the time. Cousins comps make me leery now because of the contract that is tied to his style of play. But if Morgan can go from a late-round draft pick to have the type of career Cousins has had to this point, any team that drafts him would likely be thrilled.

With the first wave of free agency in the books, our focus will soon shift to the NFL Draft. And even though the Bears made a significant investment in improving the quarterbacks room by trading for Nick Foles, it still feels as if it is a matter of “when” and not “if” Chicago drafts a quarterback in April.