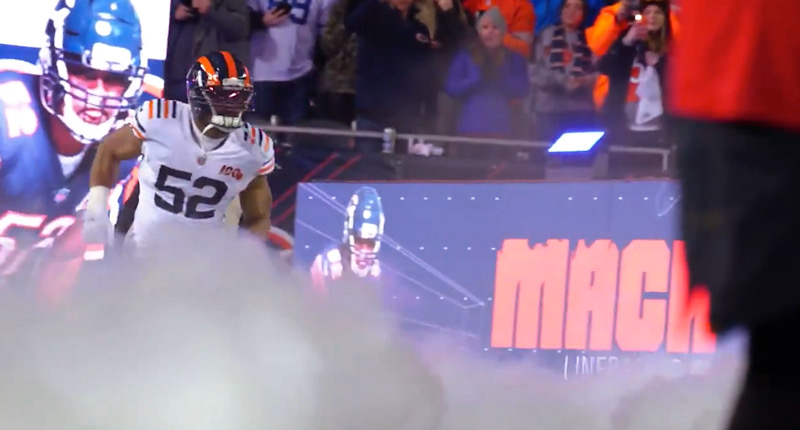 The message at the top of today’s BN Cubs Bullets by Brett is powerful. We should all read it and do some self-reflecting before we go on with our respective days.

•   When I originally shared this clip, I did so because I was certain I had never seen it before. Little did I know that Gale Sayers put a Hall of Fame in the spin cycle:

•   Shout out to Bulls broadcaster Chuck Swirsky for the history lesson. One of the things I have long enjoyed about Twitter is that it provides an opportunity to learn something new every day.

•   Fast forward to modern times and realize the Bears’ passing attack hasn’t advanced much since the 1960s:

The #Bears team passing yards record was set in 2013, Trestman's first year, when Jay Cutler and Josh McCown combined for 4,450 yards and 32 TDs.

•   In March 2018, ESPN’s Mike Clay set forth projections for Mitchell Trubisky that would have had the then-second-year QB setting new team passing records — including the franchise’s first 3,900-yard passing season. Even ahead of the 2019 season, Trubisky’s projections were encouraging. Clay’s projections lined up Trubisky to throw for 3,819 yards, 25 touchdowns, and just 12 interceptions. Trubisky didn’t hit those marks last year, but I share this as a reminder that there was once optimism surrounding what the first quarterback taken in the 2017 NFL Draft could do with the confines of this offense.

•   Also, no seems like a good time to remind folks it didn’t come from fans or hype men. Instead, it was from ESPN’s numbers guys. Sometimes projections miss. Which is why I try not to get too down when forecasted numbers hint at down years for certain players. Frankly, there’s so much that goes into one guy putting up numbers, I can see why it is difficult to peg QB stats from time to time.

•   I understand why some have lost faith in Trubisky entering the 2020 season. But one player I feel as if everyone can rally around and feel confident that a bounce-back season in the year to come is Khalil Mack. One person who is more optimistic than others id Daniel Jeremiah of NFL Network. Check out his prediction for Mack’s 2020:

•   A 14 or 15 sack season from Mack would be wonderful. Especially if Robert Quinn can rack up double digits in the sack category, too. And if Akiem Hicks can get his? And if Eddie Goldman runs into a couple of more sacks by virtue of pushing the pocket back from the middle of line of scrimmage? The Bears have four Pro Bowl caliber guys in their front seven who are true disruptors. And that isn’t even accounting for the likes of Roquan Smith and Danny Trevathan, who will be there to eat up whatever Mack, Quinn, Goldman, and Hicks don’t get.

•   An interesting perspective from Bleacher Report’s Brent Sobleski, who believes signing safety Tony Jefferson is the one move the Bears still need to make to round out their offseason. I’ve liked Jefferson for a while. Even thought Chicago should target him to replace Ha Ha Clinton-Dix, but the team did well in signing Tashaun Gipson. Adding Jefferson to a secondary with Gipson and Eddie Jackson might seem redundant, but Sobleski offers up the idea of using the free agent as a nickel linebacker or sub-package defender in certain situations. A turbo-charged defense with three stellar safeties could serve the Bears well against some of these speed attacks.

•   Sobleski has ideas for other teams that I believe would better suit the Bears, such as signing free agent offensive lineman such as Larry Warford or Kelvin Beachum, adding pass-rusher Markus Golden for depth purposes, or bringing running back Devonta Freeman.

•   The 49ers are donating $1 million to support the Players Coalition as a part to help make societal change real:

•   What a strong cover put together by the folks last the Houston Chronicle: