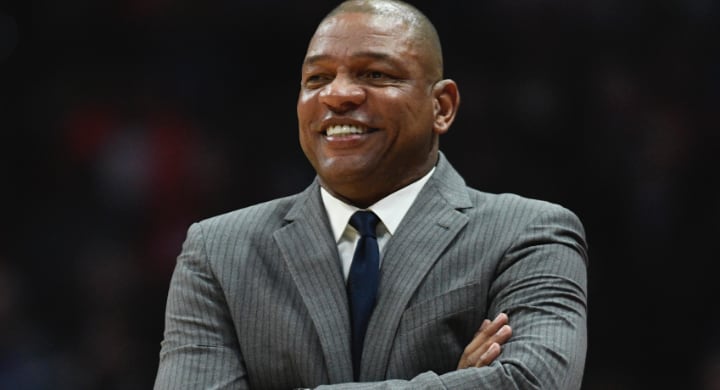 It’s the nicest day of the year. And I’ll leave it at that.

•   Doc Rivers is a die-hard Bears fan and I love to hear it:

•   If you would’ve told me that a snippet from a basketball coach would get me hyped about the upcoming Bears season, I would’ve laughed at you. But now who’s laughing?

•   That Doc Rivers and Matt Nagy have struck up a bond and a friendship over the last few years is wonderful to hear. Some of the best coaches in the game often look to their contemporaries for guidance. Not that Doc is going to show Nagy how to run his offense or anything like that, but there’s always something good that could come out of picking the brains of the great ones. I doubt Nagy wants to come out and spill the beans on everything Rivers told him and the team, but it sounds like the experience was superb.

•   We had some fun re-drafting the whole stinkin’ NFL yesterday. Looking over the piece, I’m realizing the Packers had one of the most puzzling drafts. Tua Tagovailoa was probably the best QB on the board, but Cam Newton, Justin Herbert, Kirk Cousins, Daniel Jones, Jared Goff, and Derek Carr were among the signal callers still available to be picked. Retaining David Bakhtiari is a sensible use of a pick. But With Tua being left-handed and Bakhtiari being a left tackle, there is still a question-mark as to who is protecting the quarterback’s blind-side. Also … a kicker? As one of the first four picks? That’s curious. Perhaps there’s an analytical case to be made that Justin Tucker is so much better than the league-average kicker that he should be the choice. But I’m sure there were other players at different impact positions who would’ve been more logical options.

•   Thirsty for football things? Me, too. Perhaps some football happenings are coming around the corner:

No dates set yet and no minicamps expected, but the NFL and NFLPA are discussing the possibility of certain players — such as rookies, and veterans who changed teams and need physicals — returning to club facilities on a limited basis before June 26, per sources.

•   Again, there is nothing set in stone here. But having a date to think about feels like a step in the right direction.

•   Now, let’s not forget the things that rookies have already missed out on due to team facilities being shut down. There have been no traditional post-Draft rookie mini-camps, Rookie Football Development Programs, NFLPA Rookie Premiere, or Rookie Transition Program. Maybe this doesn’t impact a Bears team that has just seven rookie draft picks on the roster. But then I think about a team like the Vikings, who have 15 draft-pick rookies, and I wonder how this offseason’s changes impacted their development plans.

•   Speaking of the Vikings, some insight onto Dalvin Cook’s holdout from team activities that sprouted up because of his desire to get a contract extension:

This makes his threat somewhat empty, or perhaps it’s not an empty threat in which case he needs better advisement

The threat of a holdout was one of the few leverage mechanisms players had at their disposal. Rookie contract players effectively can’t holdout

•   The new CBA really snuffs out holdouts from guys at the end of their rookie deals before they could really get started. And as Brad from OTC points out, this re-written part of the new CBA cut out one of the few leverage ploys rookies had. That’s a bummer for those guys.

•   Your replies to this were so EXTREMELY good and fun:

I've seen it talked about in baseball circles, but I want to ask you guys this:

What's the most impressive thing you've ever seen in person at a football game?

•   Thank you for participating, friends. It felt good to remember some football things from the past.

•   As for the most impressive things I’ve seen in person at a football game: Watching future two-time Super Bowl champ Brandon Jacobs in college was just something to cherish. He was bigger, stronger, and faster than everyone. His Saluki debut was on Sept. 2, 2004. It was my first college game. He ran for 108 yards on 18 carries and scored four touchdowns against Southeast Missouri State. Pure domination.

•   Being at Lambeau Field for Khalil Mack’s Bears debut is a close second. I’ve never seen a defensive player dominate like that in person before. Had the Bears won, that would probably over-take Jacobs’ dominance. But, hey, maybe Mack has another one of those in him in 2020. Here’s hoping!

•   Imagine being at Super Bowl XX and envisioning a potential start of a dynasty, only to watch that never unfold. Cam Ellis (NBC Sports Chicago) dives into what happened (and didn’t happen) after that glorious night in January of 1986.