Miller Looking Good, Weaponry Rankings, Where Are the Rookie Contracts? And Other Bears Bullets Skip to content 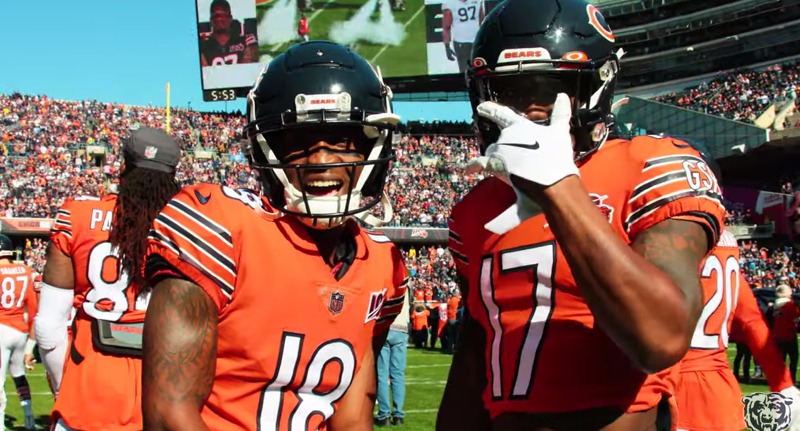 Between a fantasy baseball league draft around lunchtime and the return of (fake) baseball between the Cubs and Sox later tonight, I’m geeked up. So be sure to follow our coverage over at BN Cubs.

But also, don’t get it twisted. Don’t fall into a false sense of security because of the sense of normalcy that could possibly come with the return of sports. Feels like we’ve got a long ways to go as we continue to live through a pandemic. I mean, Toronto won’t let the Blue Jays play in Canada. So, again, we’re not out of the woods yet.

•   I write this with the caveat that players tend to look better in the summer time while wearing workout gear. But knowing that Miller ended the 2019 season with a shoulder injury, it’s encouraging to see him look this good at this point of the summer:

•   Miller is a key cog in the Bears offense. In 2018, he tied for the team lead in touchdown receptions. His work across the middle, in the slot, and even down the field helped bring a different look to an offense that looked like it had the arrow pointing up entering the 2019 season. But Miller was inconsistent last year. He wasn’t alone, as the same could be said about the quarterback throwing him the ball, offensive line blocking for said quarterback, and running back tasked to run behind said offensive line and quarterback. In short, last year’s offense was a mess. But one way it can get going in the right direction is with a healthy Miller.

•   Hey! Did you notice Mitchell Trubisky in that first video? Again, guys tend to look good in workout gear. But there’s something in Trubisky’s mechanics that looks different. I can’t really put my finger on it because of the angles, but there’s something that doesn’t look the same as it did last year. As we’ve previously discussed, Trubisky has been working with QB coaching guru Jeff Christensen, who worked with Patrick Mahomes and Jimmy Garoppolo. Here’s hoping that work pays off.

•   If it does, then perhaps the Bears’ offensive weapons will be viewed in a different light at season’s end. But when it comes to the start of the year, the picture painted by ESPN’s Bill Barnwell isn’t a rosy one. Barnwell ranks the Bears’ offensive weapons 28th in the 32-team NFL. That’s discouraging, especially considering what the Bears spent in cash (Jimmy Graham) and draft capital (Cole Kmet) in an attempt to fix a lackluster tight ends group.

•   What’s worse is that this is the second consecutive season in which the Bears have taken a step back. You’re going the wrong way, gang! In 2019, the group ranked 17th. Not great, but not in the bottom-5 of the league. And to make matters that much more painful, the Bears’ offensive weaponry ranked in the top-10 before the 2018 season. Only Miller, Allen Robinson, Tarik Cohen, and Adam Shaheen remain from that ninth-ranked group from the 2018 season. Of those players, only Miller, Robinson and Cohen have important roles in the offense. From that group, only Robinson is a proven stud. Cohen and Miller have had their moments, but not consistent enough to pencil in projected stats as you would with Robinson.

•   To be fair, this group still has potential. And with the talent that’s there, blowing past the 28th ranking should be a piece of cake. Robinson can come through with his second consecutive 1,000-yard receiving year and further establish himself as a true No. 1 receiver. Miller could have a breakout campaign as the WR2 who breaks free because opposing defenses are keying in on Robinson. And if those two players rise to the top of the opposing scouting report, that would lave the middle open for Cohen to pick up chunks of yards as he did in 2018. Again, this group has a certain amount of upside. It’s just that they’ll have to work together in order for the entire unit to shine. Team work makes the dream work, baby!

•   Swim gear, chargers, headphones, books, and more are your Deals of the Day at Amazon. #ad

•   Some more pre-camp polls for you guys:

Which rookie are you most looking forward to hearing about at #Bears training camp?

Which of the later-round rookie players are you most looking forward to hearing about at #Bears training camp?

Which second-year player are you most looking forward to hearing about at #Bears training camp?

•   I’m bothered that Chicago hasn’t signed any of its rookies to contracts yet. It’s something we discussed here on July 6, and yet, still no movement. Some rookie contracts have been slow to trickle in across the league, so it’s not as if the Bears are alone here. Even still … it’s about time these guys are officially in the fold.

•   Part of me isn’t worried. Remember, Trubisky didn’t sign his rookie deal until the day he and his fellow rookies reported to camp. For that to happen in 2019, contracts will have to be signed by Tuesday. Deadlines tend to get deals done, so maybe that’s something we should have circled on our calendars. Ideally, the Bears should want to avoid a lengthy holdout (like the one Roquan Smith endured before signing his rookie deal). If you’ll recall, Smith had a lengthy holdout that limited his early season action. And while Smith went on to have a solid rookie year, I’d like to think the Bears wish they would’ve had him for a full load of reps as a rookie.

“For many of these universities to get public funds, they have to be diverse.”@JimTrotter_NFL, @dsleon45, @TarikCohen, & @wyche89 break down myths concerning HBCUs. pic.twitter.com/QWwb6m5VNK

“This is a different generation. Hopefully there will be more to follow Makur Maker.”@JimTrotter_NFL, @wyche89, @TarikCohen and @dsleon45 discuss the possibility of more 5-star recruits committing to HBCUs. pic.twitter.com/au492kfHLV