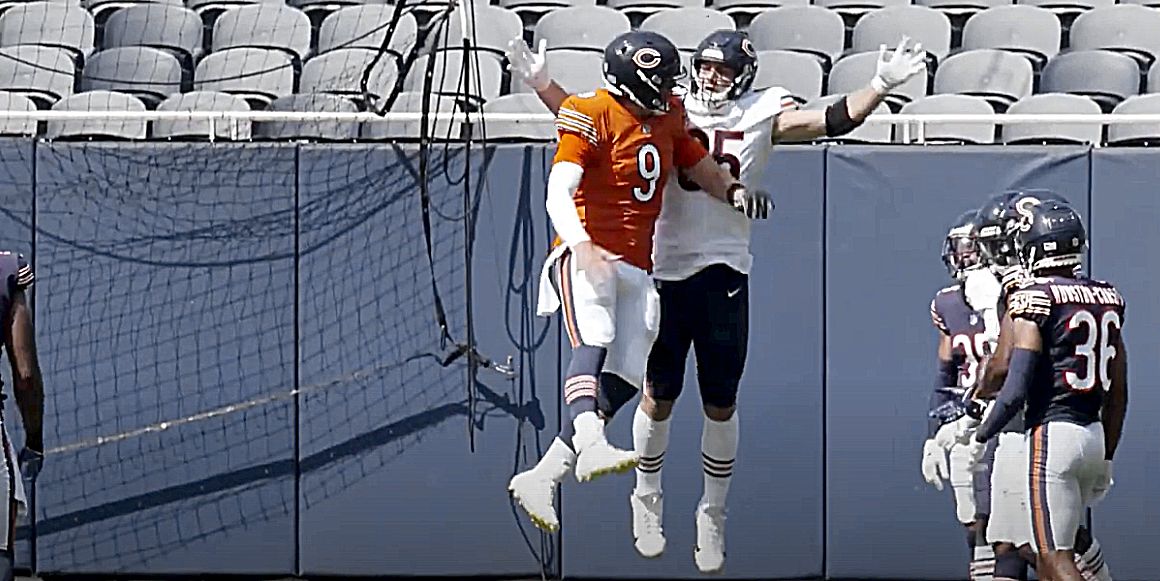 ABC is showing “Black Panther” commercial free tonight as part of a tribute to actor Chadwick Boseman, who died at age 43 after battling colon cancer. It’s one of my favorite movies and it will be followed by an ABC News special tribute after the movie’s conclusion. I’ll be tuning in later.

•   The Chicago Bears returned to Soldier Field on Saturday. Two of them even found the end zone:

•   I keep telling myself I’m not getting hyped over practice things. And yet, the happy feelings return to me whenever I see Cordarrelle Patterson with the ball in his hands in the open field. No matter who the Bears’ quarterback is this season, they need to get the ball to Patterson whenever possible. So while I won’t go as far as to suggest force-feeding the playmaker, his usage rate should be closer to the 63 touches he received in 2018 with the Patriots than the 28 touches he was given last year with the Bears.

•   The Jimmy Graham experience is going to be an interesting case study. Numbers suggest the Packers didn’t use Graham as well as they could have the last two season. So if the Bears are smart about how they deploy Graham, he could have a bounce-back season. I don’t imagine it will look anything like what he did in New Orleans. But it would be a real boost if Graham performed as well as he did in his final year with the Seahawks.

•   In order for the Bears offense to best use Graham and Patterson, they’ll need to move the ball more efficiently and get into the red zone more often. The ability to do that will depend on who is running the show. Unfortunately, the Bears are keeping that under wraps for the time being. Head Coach Matt Nagy informed reporters on Saturday the team will not announce which QB will start Week 1 before the game. Just like Tom Petty once sang, the waiting is the hardest part.

•   It’s gamesmanship, to be sure. And while I usually mock moves like this, I suppose Nagy has good reason to keep Detroit on its toes. Mitchell Trubisky has a 9-to-1 TD-to-INT ratio in three starts over the last two years against the Lions. Nick Foles won the Super Bowl LII MVP award the last time he squared off against a Matt Patricia defense. So if any team should be troubled by having to prepare for both options, it’s these Lions.

•   An expanded look at the Bears’ Saturday practice:

•   Beyond the quarterback analysis, the Bears used Saturday’s practice as a dry run for how things will operate this season. Nagy has often described this season as the year of the contingency plan. So it’s good that the communication between Head Trainer Andre Tucker, the team’s players, and Nagy’s staff was good. And that things seemingly went well logistically, while not game-changing, is better than the alternative. (ChicagoBears.com)

•   Mic’d up Demetrius Harris is a treat:

•   You know what they say — two Macks are better than one:

•   The rookies really put in some work on Saturday:

Also thought rookie Trevis Gipson has a nice day as well. Had a few pressures off the edge. Looked like he was in on a sack too. But not sure if they credited him with one. #Bears

Among the standouts to me today was rookie WR Darnell Mooney. Found ways to get open a lot. Had himself a good day out there. #Bears

Going through my notes from today’s #Bears scrimmage. Kyle Fuller intercepted Mitch Trubisky twice, including once off a tip pic.twitter.com/xqvVRI5IJG

Some final observations on the #Bears’ quarterback competition after Saturday’s scripted scrimmage and with practices now closer to the media.https://t.co/v3EJg2D3Ol

•   This is not a list that you want to be at the bottom of:

•   College football returned on Saturday night. And in an ode to social distancing, the Central Arkansas defense did this:

•   Football highlights are going to be few and far between for the time being, so we might as well enjoy them while we can.