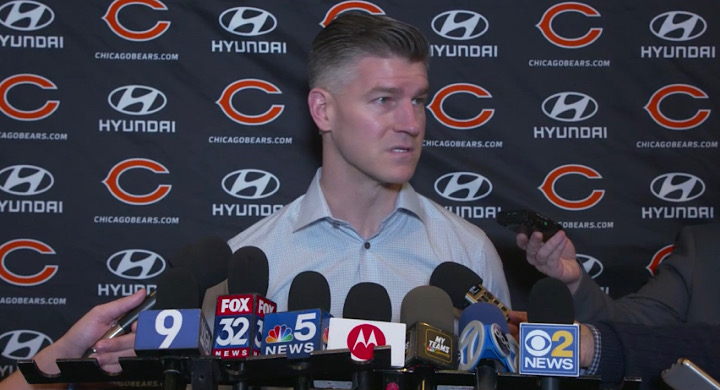 The chatter ahead of the 2021 NFL Draft is noisy as heck.

One GM believes five quarterbacks can go within the first six or seven picks. Anonymous rival GMs view the Bears as a team lurking to move up. If that’s the case, then it’s worth noting that there are at least five teams apparently willing to listen to offers from QB-thirsty teams. And for what it’s worth, there is precedent that these deals – if consummated – could be awfully juicy. Like I said … noisy. And we’re hardly done.

For example, Peter King (Pro Football Talk) gets into why he thinks there won’t be big trades up into the top-10 this year, throwing cold water on the whole shebang:

Trades near the top of the draft could be limited this year. “The 49ers ruined the market by trading two ones to move nine spots,” one GM said. San Francisco, to go from 12 to three in the first round, gave Miami two future first-round picks and a third. So if Denver, for instance, wants to go from ninth to fourth with Atlanta to pick a quarterback, for example, Paton would have to pay a ransom because of the Niners’ market-setting move. I won’t be surprised if there are no trades in the top 10.

If you’ll recall, the 49ers turned this draft on its ear on March 26. That’s when the team traded up from the No. 12 pick to get the Dolphins’ No. 3 pick. It’s a deal that includes first-rounders in 2022 and 2023, as well as a 2021 third-round selection. In other words, the Niners made a landscape-shifting deal that King seemingly believes other teams won’t dare match. And if other teams aren’t willing to pay the piper, then sliding up in the draft isn’t something he expects will happen.

For the record, I get it. I understand why King struggles to envision trades up in this draft. The bar has been set so high when it comes to the cost of doing business, it’s almost unbelievable to think someone could match (or surpass) what San Fran did. But much like the Niners’ deal suggests how the team feels about the perceived value of picking this class’ QB3, there could be another team who feels similarly about QB4. Or even QB5, for that matter. Remember, it only takes one to throw everything for a loop.

All that to present *THIS* as a counterpoint:

Several teams have been making calls about getting into the top 10 of next week’s NFL Draft — including the #Patriots, who could have their eyes on Ohio State QB Justin Fields if he begins to slide. @gmfb @nflnetwork pic.twitter.com/GjJazJXZQp

In other words, don’t expect trades up in the 2021 NFL Draft. Unless, of course, one of these teams checking in around the draft process cuts a deal. Got it? Good.