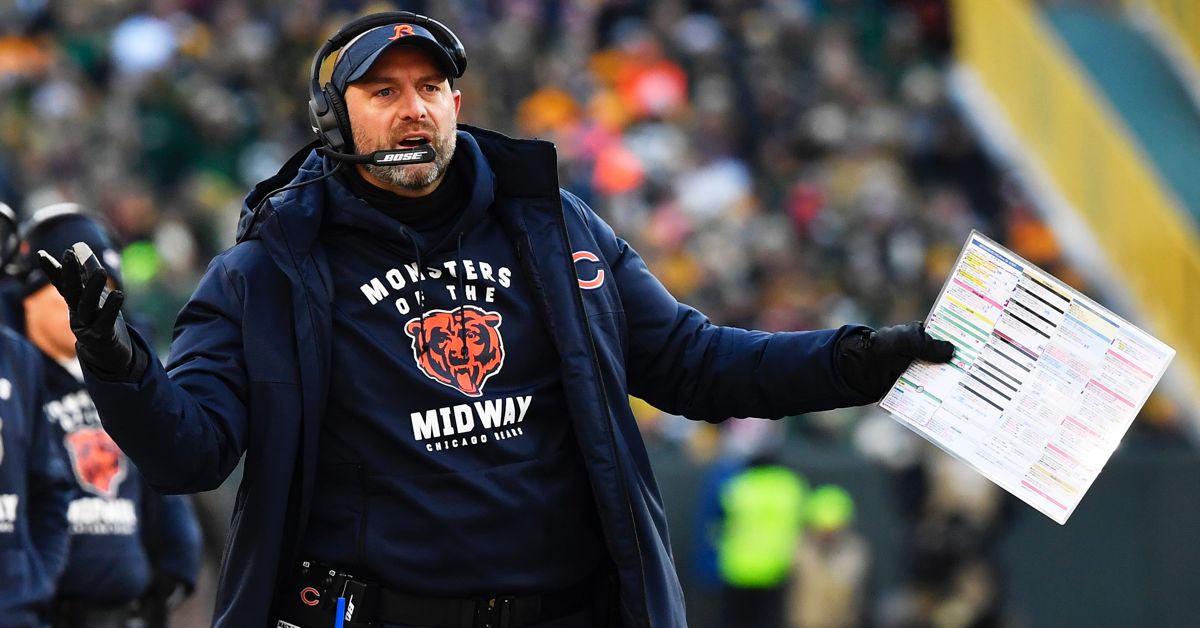 Happy AppleFest weekend in Lincoln Square! You better believe I’ll be making my way there this afternoon. And maybe tomorrow after the Bears-Lions game, should the mood strike.

•   It’s been a long week for Bears fans, so it’s only right for PFF to twist the knife:

•   Any and all context aside, this is the kind of statement that comes from the type of coach who knows he is on thin ice. And we’re in Year 4, Bears Head Coach Matt Nagy shouldn’t be on this “we know what we’re doing” tip. Instead, he should be showing us this. Talking in this manner early in the head-coaching arc? I can deal with it. Four weeks in to Week 4 and we’ve got 51 games (53 if you count the postseason) worth of data that more or less goes against the statement above. To be fair, Nagy has 14 games to right the ship and prove himself. But if you let Bears fans tell it, this is a coach hanging on by a thread.

•   Part of me gets a kick out of the silly gamesmanship between Dan Campbell (preparing for Nick Foles!) and Matt Nagy (who’s starting at QB? ¯\_(ツ)_/¯). But part of me doesn’t understand the purpose. Do the Lions need to play mind games in preparing for an offense that hasn’t done much of anything positive going on four years? Why do the Bears need to play the misdirection game in preparing for a Lions team whose franchise is going through another rebuild? This is like if in the Spiderman pointing at Spiderman meme featured a pair of superheroes wearing raggedy, too-tight-to-fit disguises.

•   I hate how a Week 4 game against the Lions FEELS like a must-win:

The biggest takeaway from Matt Nagy's bunker mentality of not revealing the starting QB or play-caller: There's a ton of pressure on him to win Sunday. From everywhere. And he knows it.

•   A beautiful thread that serves as a reminder of the power traditional media still wields when given the opportunity to work:

"You can’t blame him for staying positive. But you can blame him for being repetitive… Year 4 is about production, not promises."https://t.co/BafScKyNzI

•   If I didn’t know this was real, I would’ve thought it was a Saturday Night Live bit:

•   My apologies, friends. It’s way too early in the season for this type of nonsense. But if I had to see it, you did too. I mean, wouldn’t it make more sense for Justin Fields to use his leverage force change at the top and bring in his own guys than to force a trade out of town? You know, like we’ve seen other players do across the sports landscape? Should we continue living in a world of player empowerment, I think we’ll start seeing more QBs flexing to get help than trying to force the issue via trade. But I guess we’ll see how things develop as time passes.

•   Why does it feel like a healthy chunk of the year has been dedicated to doing right by a QB on a one-year deal?

"It means a lot. I feel like that's what I was told when I first got here and obviously a lot can change … but it just shows the confidence that they have in me and what I can bring and what I can do for this team."

•   Did some podcasting ahead of Sunday’s game against the Lions:

PODCAST: It's the end of an era at Arlington Park. We talk about our memories at the local oval. Also, Luis Medina (@BN_Bears) joins us to talk about #DaBears potential move to Arlington, and if the offense can rebound from last week's disasterhttps://t.co/bN3xcLiavi

🚨 Sources: Rob Gronkowski (ribs) officially OUT Week 4 against the Pats. It’s worth noting that Gronk – during his one-year retirement – discussed rushing back from injury as a key issue/reason why he stepped away from football. 🚨

•   I’m still hyped about this game, though:

No TV or Radio broadcast for the Blackhawks tonight, so enjoy your trip to the 1920s for the evening https://t.co/9pB8iuMHcS

•   Have you seen the Eastern Conference’s coaching rundown? It’s stacked. But I don’t hate the possible value here:

Billy Donovan Has the Third-Best Odds to Win Coach of the Yearhttps://t.co/3kmwVdbS1f

•   The Cubs are currently stuck on 69 wins, but there is something to celebrate after Friday’s walk-off loss: