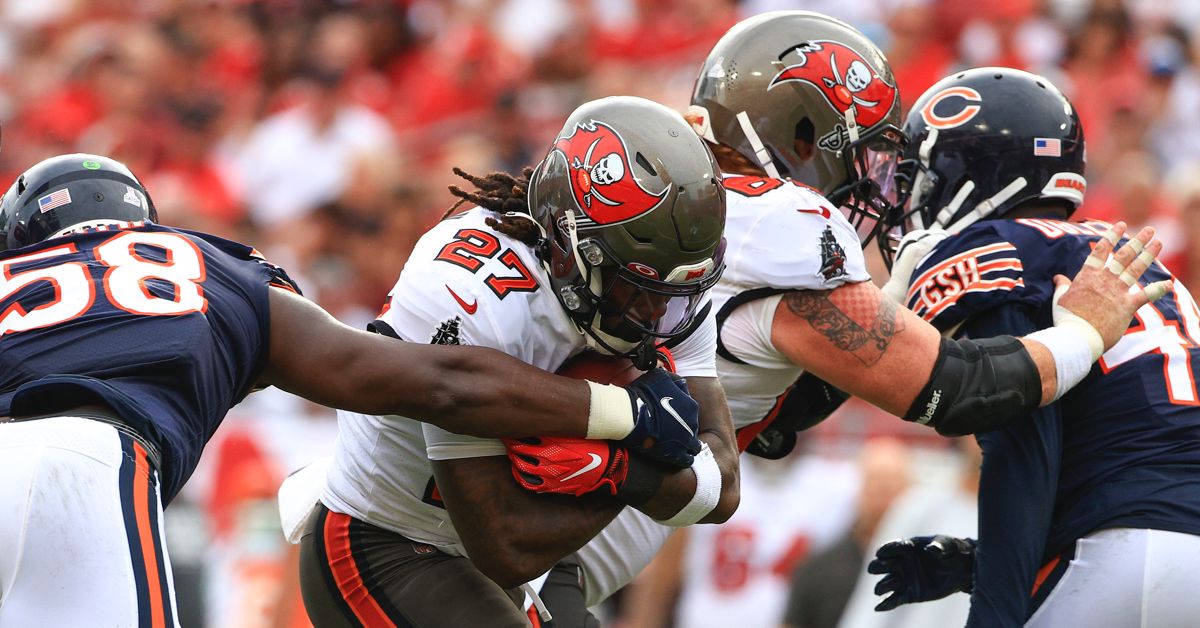 I woke up with Missy Elliott’s “The Rain” stuck in my head because I’ve heard nothing but rain on my window for the last 15 hours or so.

Videos in the 90s were just built different.

•   It never felt close. And it never was close. Tampa Bay beat the crud out of Chicago’s football team. The Bears were out-classed in every facet of the game. An offense that was stuck in the mud had no shot against a defense coming in relentlessly from every conceivable angle. A defense that was a step slow. Special teams that couldn’t corral the return game on a tone-setting punt-return. Coaching that tripped on its own feet at every turn. It was a thorough beating.

•   Justin Fields looked every bit as bad as the metric cited in this tweet suggests:

Justin Fields recorded a QBR of 1.9 in today's loss to the Bucs.

It's the second-worst QBR game this season, trailing only Davis Mills' 0.7 in Week 4 in a loss to the Bills.

Fields' QBR this season is 16.7, the lowest among all qualifiers.

•   And yet, it would be wrong to set the blame solely at Fields’ feet. I lost count of how many times I yelled “he’s got no chance out there!” at my television set:

Nice get off by Shaq Barrett on the strip sack pic.twitter.com/pixxDOSLUd

•   I struggle to understand why Lachavious Simmons was starting ahead of Alex Bars at right tackle on Sunday. Don’t get it twisted, as I understand the team was in a scramble drill with Elijah Wilkinson’s late-in-the-game placement in COVID protocols. But Simmons had one career offensive snap coming into the game. Meanwhile, Bars had eight starts as an offensive linemen for a productive group last year. Heck, Bars had starting experience in a blocking role *THIS YEAR* as he was in the game-opening formation as an eligible lineman in the Bears’ win against the Raiders a few weeks ago.

•   To be clear, starting Bars over Simmons doesn’t change this outcome in the slightest. But if your collaborative efforts came to the conclusion that starting someone with just one snap under his belt against Todd Bowles’ defense was a better decision than starting someone who had 568 snaps and starting experience last year, then something is broken in your decision-making progress.

•   Not that I needed the reminder, but I can see why Matt Nagy wanted to hire Todd Bowles to run his defense after Vic Fangio left:

Get 4-over-3 to the top of the screen. And 2-over-1 to the boundary. #Bears #Bucs @NFLMatchup pic.twitter.com/uVEJhAfx0Z

•   It’s not as if the coaches were giving him any help:

On the first INT, Justin Fields quick snapped the ball because they told him in his headset the Bucs had 12 players on the field. He thought it was a free play. Second week in a row that has happened.

•   Don’t get me wrong. Some of it is on Fields. There were misses on throws. That processor needs to be quicker, in terms of getting the ball out, throwing it away, or going down. But Fields is a rookie. And when your team is playing a rookie quarterback behind a makeshift offensive line and a group of less-than-desirable targets, this is the stuff that can happen.

•   It’s never good when your offense draws comparisons to the Marc Trestman era:

In Marc Trestman’s final year in Chicago they still averaged over five more points per game (19.9) than Matt Nagy’s offense.

We thought that was rock bottom back then, but we had no idea just how deep they still had yet to go. https://t.co/SqzYuUCMMT

•   It’s not lost on me that in 2014, Tom Brady put a 50-burger on the Trestman Bears that began that team’s death spiral. Seven years later, his new team’s thrashing of Chicago’s football team could serve in the same capacity. Because time is a flat circle.

•   I couldn’t help to think about how Nagy insisted on giving Fields no first-team reps during training camp as I watched drops, witnessed miscommunication on the field, and noticed how timing was off between Fields and his receivers throughout the afternoon.

Sunday's loss to Tampa Bay marked the 13th time the #Bears have scored 14 or fewer points in a game since 2018.

•   We’re in Year 4 of the Nagy era. And we’re going on seven years of the Pace regime. If you look at it through those lenses, then yesterday’s result is unacceptable. The last two losses are an indictment of an era of failure.

•   What in the wide world of word salad does this even mean?

Matt Nagy: "I will say the last couple days with our team, we’ve become really close. For us to become as close as we have the last 24-48 hours, I just trust and believe in them."

Just a hunch. That one's not going to go over really well back in Chicago.

Still just two carries on the season where he's been stopped behind the LOS. Both in Week 7. pic.twitter.com/yTGqfrywxU

•   For your venting needs:

Much of the Bears beat crew is stuck on a plane in Tampa with frayed wires sending this aircraft to IR. Little to no chance this group makes it to Halas Hall this morning for Matt Nagy’s Monday presser.

Really ups the pressure on those back in Chicago who will go.

We’re stuck in Tampa for another day. The shuttle driver for our new hotel heard we were from Chicago and told us everyone wants to fire the football coach. He then asked if we needed strip club recommendations.
It was 10:45 AM.

•   Remember when the Bears hired Marc Trestman instead of Bruce Arians? A reminder of how so many of the Bears’ issues are rooted in things that happened long before this team was even put together.

•   Computers, furniture, and Funko Pop are among the Epic Daily Deals today at Amazon. #ad

I know it might be silly, but this little moment in the context of the first three games felt like it meant a lot.

After so much talk about potentially awkward fit and chemistry, this team couldn’t look happier to be playing together.
pic.twitter.com/lFdKRaJW1j

•   Chicago’s hockey team is in one of those ruts where everything that can go wrong, will go wrong — and in spectacular fashion. The Hawks are 0-5-1 and were dealing with COVID-19 issues ahead of their most recent defeat.

•   The St. Louis Cardinals’ new manager is only one day younger than I am, which really puts some things into perspective.