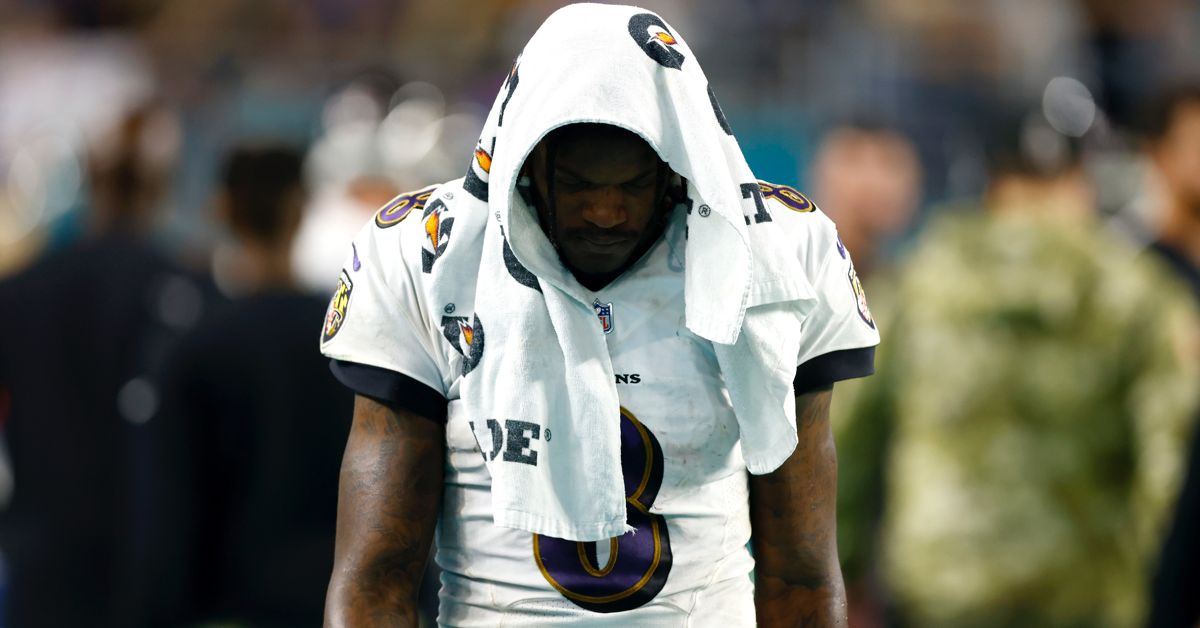 When reports came out of Lamar Jackson’s participation in Friday’s practice, it felt like a safe assumption that he would suit up for the Ravens on Sunday.

But just in case he can’t, get familiar with the name Tyler Huntley:

We are adding QB Lamar Jackson (illness) back to the injury report, and he is questionable to play tomorrow vs. Chicago.

Huntley is Baltimore’s backup QB. And if Jackson can’t play, it’ll be Huntley — who took the lion’s share of starter’s reps this week — getting the call under center against the Bears on Sunday.

UPDATE — And that possibility is more real than what we otherwise might’ve expected:

A league source on the status of Ravens’ QB Lamar Jackson for Sunday’s game in Chicago against the Bears: “I’d say it’s 50-50. He’s sick – not Covid.”

ESPN’s Adam Schefter shares from a source that Jackson is a “50-50” shot at playing. Evidently, his non-COVID illness os doing a number on him. That’s quite a turn from how Jackson appeared to be feeling on Friday:

Jackson has been dealing with a non-COVID illness that kept him out of practices on Wednesday and Thursday. But despite declaring he was a “feeling great” ahead of Sunday’s game, Jackson still lands on the injury report because of the illness that was a limiting factor this week.

When it is hitting on all cylinders, the Ravens offense is one of the best in football. This group ranks second in yards and 12th in points scored. It’s the best rushing offense in total yards, and has the sixth most ground scores. And even though Jackson is well known for his exploits as a ruler (639 yards on 106 carries), his 93.1 passer rating is respectable, while his 2,447 passing yards are the ninth most in football. There’s a reason he is a premier quarterback and MVP candidate, after all.

Ultimately, my gut says Jackson will probably find a way to play. NFL Network reporter Stacey Dales tweets Jackson will travel with the team and will be checked out when the team touches down. If his situation worsens, then it’ll be Huntley’s time to shine. But if Jackson gets medical clearance, he’ll be on the field.

Jackson’s absence could make the Bears’ uphill battle a bit easier. But for what it’s worth, a game featuring Jackson and Justin Fields is too tantalizing to want either side not at full strength.

Meanwhile, a late update on the Bears side of things:

#Bears injury update:
RB Damien Williams (calf) has been downgraded to Doubtful for tomorrow's game vs. the Ravens.

Damien Williams popping up with a late-in-the-week calf injury after practicing through a knee injury stings. But running back happens to be one position the Bears still have ample depth. If Williams can’t go, Khalil Herbert will step into the RB2 role — one he has filled admirably in spots this season.