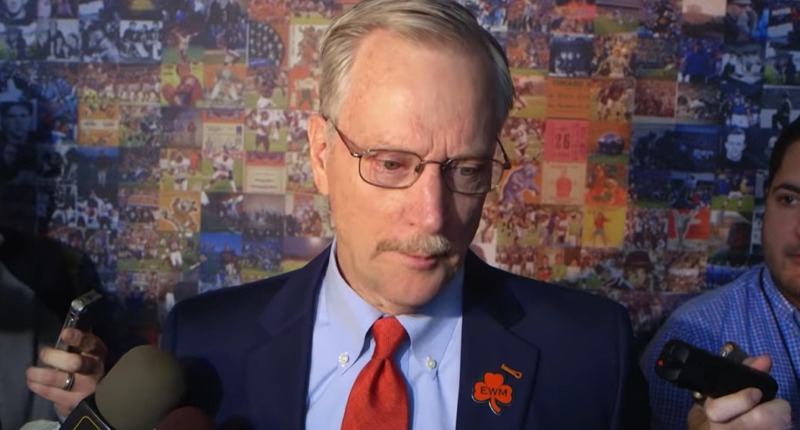 Remember when Bears owner and chairman George McCaskey said that he doesn’t get involved in football decisions?

Well, if we’re to believe Hub Arkush’s report on 670 The Score’s The Bernstein & Rahimi Show, that is simply not true. And alarming.

Just now on the show, @Hub_Arkush said according to his sources that it was George McCaskey who instructed the team to name Justin Fields the starting QB. #Bears https://t.co/rdRIBS35Xbhttps://t.co/2CwoqblZvq

According to the station’s long-time football insider, his sources have told him that George McCaskey made the call to name Justin Fields the permanent starter over Andy Dalton leading up to the Raiders game back in Week 5, not Matt Nagy. Nagy was ready to turn back to his plan of sticking with Andy Dalton for the time being, but McCaskey wanted the team’s first-round quarterback under center moving forward.

It’s unclear how the directive was given to the coaching staff, whether there was a conversation in person between McCaskey and Bears head coach Matt Nagy, or if general manager Ryan Pace was directed to give the instructions to Nagy. The move was against the wishes of Nagy, per multiple sources.”

That excerpt comes from Hub Arkush himself in his report for Shaw Local’s, which you can read in full below.

This development is just another embarrassing chapter in the books of Matt Nagy and Ryan Pace with the Chicago Bears. The Chairman of the Chicago Bears stepping on the desires of his football leadership team and forcing them into starting Justin Fields just a month into the season is probably all the proof we need to confirm that McCaskey has lost all faith in Matt Nagy. Probably GM Ryan Pace as well (seriously, where is he in all this?), making the notion of McCaskey cleaning house after this season even more plausible. We can hope, at least.

That said: even if McCaskey’s determination about Fields was correct, you never really want to see ownership getting involved in football decisions like this. All the more reason to have better football leadership in place, right? This report really doesn’t make ANYONE look good.