Dealing With Thanksgiving Bears Drama, Getting Moss'd, More Chanting and Other Bears Bullets Skip to content 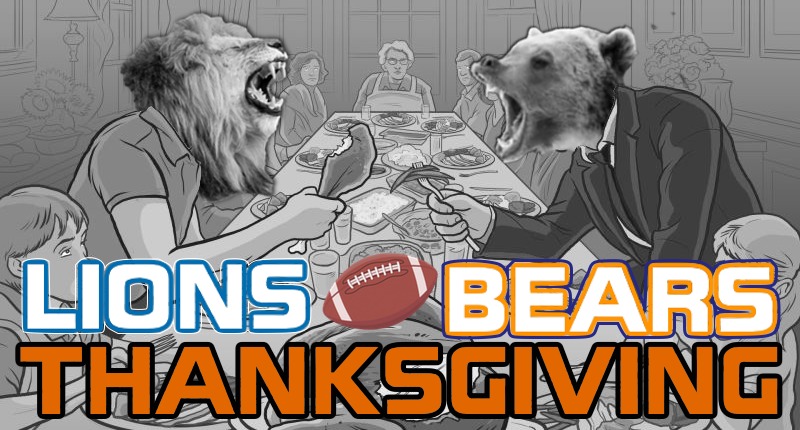 My pops and I threw down with a 10/10 meal on the night before Thanksgiving:

We made it to Thanksgiving,
So maybe we can make it to Christmas… pic.twitter.com/2p2SgqNEJY

Not pictured: The cheesecake I made.

May you, your family, and friends have a wonderful day of stuffing yourselves and enjoying good company.

And leave the arguments over inconsequential things for another day.

•   While I humbly request that you leave your family drama at the door on Thanksgiving morning, the stuff surrounding the McCaskey family’s crown jewel has been a comedy of errors this week. The headline for this Jon Greenberg piece in The Athletic is perfect: The Bears are the family you want to avoid on Thanksgiving.

•   Speaking of avoiding the fam, Cam Ellis (670 The Score) shares great advice on how to talk to folks at your Turkey Day gathering. This is probably the most important thing you’ll read today, especially if you’ll be mixing it up with company.

•    In a move that should have been done well before it reportedly went down, Chairman George McCaskey addressed Bears players to deny the Matt Nagy firing report. Nothing like swooping in for damage control after the situation has run wild and out of control.

•   Mark Potash (Sun-Times) wonders if it’s too little, too late for Bears players to rally around their embattled head coach. Professional athletes love drumming up support via the “Us vs. The World” sentiments. And knowing that this era of Bears football began with many of these prideful players taking to heart bulletin board material others were leaving in 2018, I’m sure there is room for one last gasp. It’s just that it feels like it won’t be enough. Even if it was, it might be too late. It’s just so hard to put the toothpaste back in the tube after it’s been splattered around the countertop.

•   Think the Bears have a tough day ahead of them? It could be worse. They could have to cover this guy:

•   Here’s a timeline that makes me want to throw my laptop into the lake. When asked about his toe injury, Packers QB Aaron Rodgers told the Pat McAfee Show on Tuesday that he had “no lingering effects, other than the COVID toe.” As it turns out, COVID Toe is a real condition, leading the Wall Street Journal’s Andrew Beaton to write about the very real medical condition that is COVID Toe. On Wednesday, Rodgers came clean and told reporters he didn’t have COVID Toe and that his toe was fractured. And to wrap things up, he called the WSJ’s piece “disinformation” and was asking for an apology from a reporter who didn’t even write it. (Awful Announcing)

•   Something to listen to today if you have time:

🎙️NEW PODCAST: @sean_hammond, @KyleNabors and I discussed the rumors regarding Matt Nagy’s status and the breaking news regarding George McCaskey’s directive to start Justin Fields.

•   This is a no judgment zone. We all have our vices. Moreover, we all have our ways to get through Thanksgiving. But as long as we do it together (and responsibly), things will be alright:

Overheard in the Ford Field press box …@patrickfinley: "Colleen, you don't happen to have a screwdriver in your purse do you?"

•   The Bulls put up a clunker last night. Admittedly, we’re discussing at a small sample of games, but it looks like they’re having issues implementing Coby White into the mix. And, unsurprisingly, the Bulls were appearing to have problems finding chemistry with Nikola Vučević returning from his COVID-related absence. Last night’s loss stunk. But, hey, even the 72-10 Bulls lost 10 games.

The Blackhawks Have A Goal-Scoring Problemhttps://t.co/2hEcBecVPp

•   To what extent the Cubs’ interest in Marcus Stroman will ultimately be determined at some time down the road. But I love seeing that they’re in on one of my favorite pitchers: