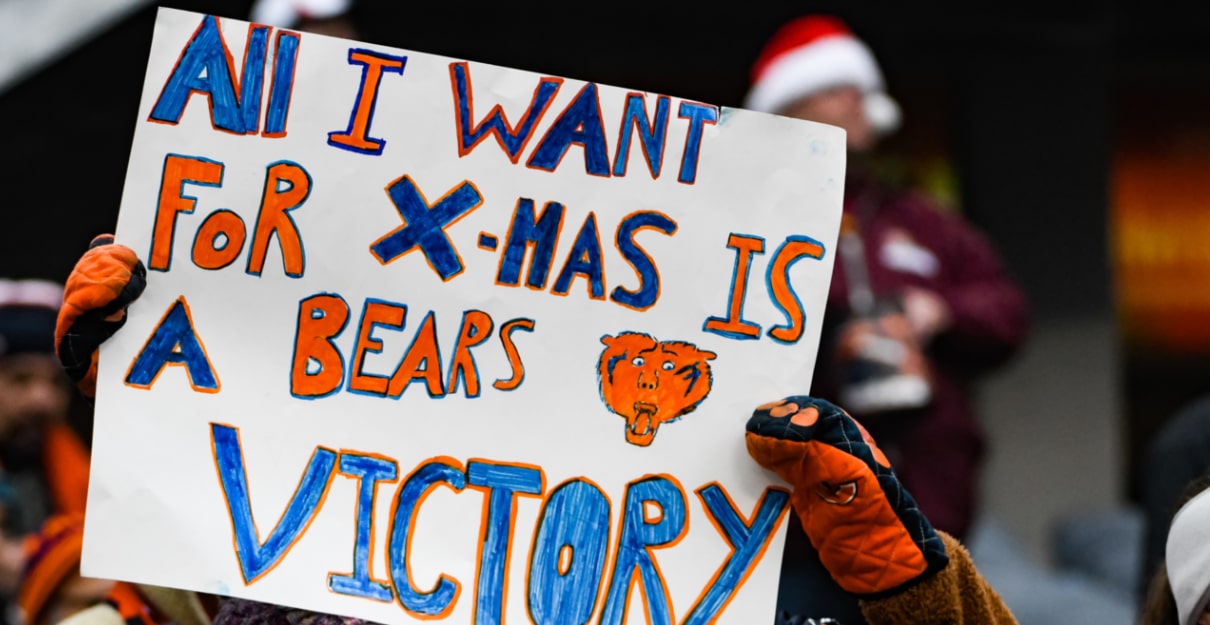 I hope that everyone is enjoying their holiday and that this reaches you well. I’ve spent the past few days wrapping gifts and doing some last-minute Christmas shopping for my family, and I got to thinking if I could send ol’ Kris Kringle a list of things that I want as a Chicago Bears fan, what would they be? It would be a long list, that’s for sure.

The Bears lack in almost every area from the sidelines to the field; there’s no shortage of things we can ask for this Christmas (for next year, of course). But, what might the players on the Bears ask for if they were sending their Christmas letter to the North Pole?

Lucky for us, I know a guy, and I got my hands on a few letters to Santa Claus from some Bears players and coaches.

•   Dear Santa,
I haven’t been great this season, but I feel like I’ve made the most of what I have around me, and I promise you there’s a bunch of talent in me. If I could have another wide receiver or two to join my favorite buddy Darnell Mooney, and maybe a couple of competent big guys in front of me to protect me, I sure think that I can be the guy Bears fans have been searching for forever.

Signed, your favorite QB1, Justin Fields
P.S. I’m not a west coast quarterback.
Watch some Ohio State tape; I thrived in four-second drops and vertical shots.
A play-caller that knows how to use me would be awesome too.

•   Dear Santa,
It’s been a slice, but I know where I’m not wanted, and I think it’s time for a change of scenery. I just hope after a down year that I’ll find a happy home elsewhere next season, and you know, I do like Green Bay. After all, I almost signed there a few years ago; maybe this time, I will.

•   Dear Santa,
I would love to get some more touches next season. I average over four yards per carry but rank in the league’s bottom half in rushing attempts. I’m just saying that maybe if I got the ball some more, I could help our 29th ranked offense and maybe take some pressure off our rookie quarterback. I’m not offensive coordinator, but apparently, neither is anyone on the sidelines, so perhaps you can hook me up in that department, Santa?

•   Dear Santa,
I think I did a pretty good job this season with an aging defense that was decimated by injuries and COVID most of the year, but I think my boss is going to be out of a job in a few weeks; I hope that doesn’t mean the same for me. Maybe I could stay on here under a new regime, or maybe I can land a new gig somewhere else. Either way, I don’t want to be lumped together with the rest of the guys on this coaching staff when the inevitable happens.

•   Dear Santa,
I’m not very good at football these days, but I did my best this year, and I tried to make the best of a pretty crappy situation. I was told I would be the guy, and then they drafted Justin, and I get it. That’s why I tried to help the kid out and step aside gracefully when it came time. I’m just hoping to land a nice job where I can mentor a young quarterback and carry around a clipboard while I make some money. Or, maybe a team like the Texans or the Seahawks might need a veteran quarterback to bridge the gap if they trade Deshaun or Russ this spring.

•   Dear Santa,
I know that you know that I deserve it. I set a new career-high in tackles, I’m going to pass Brian Urlacher in tackles through four seasons, I’m all over the field, and I’ve turned into the face of this defense… What’s a guy gotta do to get a Pro Bowl nod around here!?

Signed, repeated Pro-Bowl snub, Roquan Smith
P.S. I’m about due for a new deal soon, so hopefully, I can secure that bag in Chicago and stay here for a long time.

•   Dear Santa,
I’m not big on planning things out when it comes to my work, I just like to wing it, but I’m pretty dang good at it! I just wish I could get some more chances to show it. It sure would be nice to get more touches to use my open-field speed to score some more touchdowns for my team. Work me into the offense more, come on, trust me! Remember Green Bay!?

•   Dear Santa,
I’m good at making plays on the ball in the passing game, but I’m not much for tackling. If I could get the courage to make some plays in the tackling game, I might be able to live up to my massive contract, and heck, maybe I might even run into a fumble or two that I can run back the other way. I sure do love celebrating in the endzone!

•   Dear Santa,
Things haven’t worked out for me here in Chicago, and I’m not sure that I’ll be back next season, but I sure wish that people would remember that I’m a human just like them. I get that people don’t like me professionally, but maybe they could stop acting like children and chanting loudly for my job everywhere they go. Or, maybe even just at my kid’s high school football games. This Christmas, I would like people to learn to separate their emotions and realize that it’s not all right to attack me personally because they don’t like the way I call plays in football. It probably won’t mean much for me here much longer, but hopefully, they remember to be nice to the next guy.

Signed, Matt Nagy
P.S. I was calling the plays all along. Suckers! ✌🏻