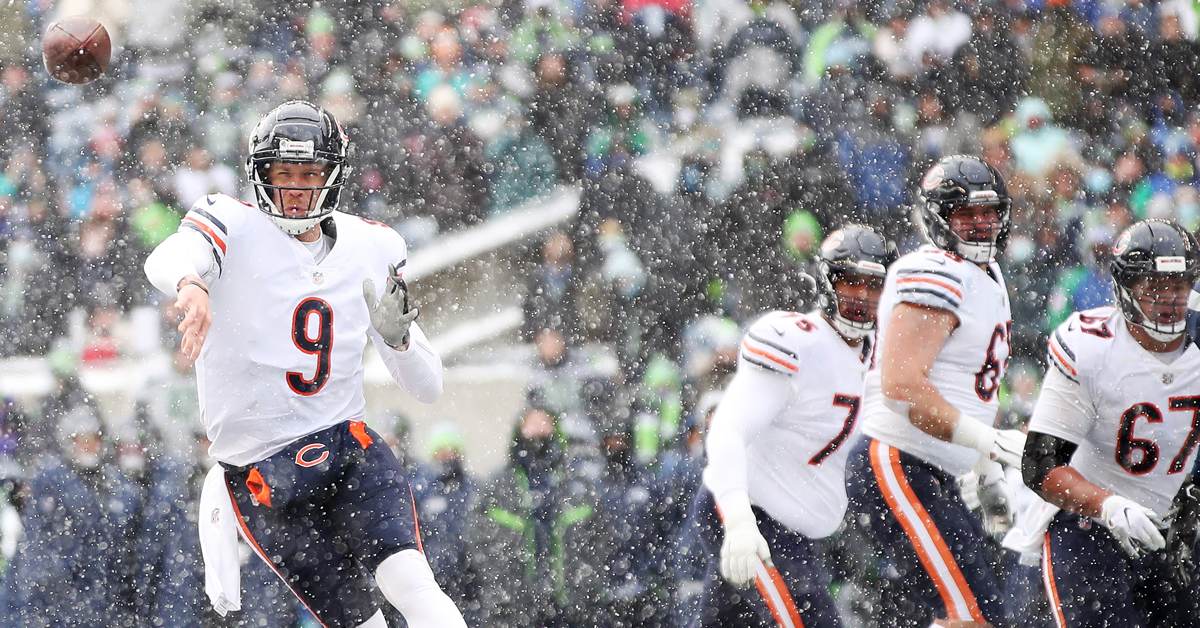 The full Nick Foles experience was on display this Sunday, eh?

During the game, he displayed that uncanny ability to make something out of nothing, resulting in a 25-24 Bears win over the Seahawks. And after the game, he delivered a refreshingly honest breakdown of, well, much of what’s going on with the team right now. In a year in which the Bears needed guidance, clarity, and honestly, has there been anyone more forthcoming than Foles?

The Offense Works Because of the Players

Earlier in the year, Foles was caught on camera saying the Bears offense wasn’t working. You might remember that as the game Justin Fields was running for his life against the Browns in late September. And when the topic came up in Foles’ post-game press conference on Sunday, he faced it head-on:

“The offense was not working that day,” Foles said, matter-of-factly. “I love this question because everyone was thinking it at the time.”

Foles refused to throw his head coach under the bus when the opportunity presented itself: “It’s not my place to say” why the offense wasn’t working, but the message was plenty clear. While Foles, Justin Fields, Andy Dalton, and Mitchell Trubisky have each had their own shortcomings, the common thread between them is Head Coach Matt Nagy.

Foles went on to credit the hard work and continued effort of his teammates for the win on Sunday, which felt particularly notably because throughout the Nagy era, there has been an overemphasis from the coaching side about how the scheme will let the players shine. But that’s not how it works. It isn’t how it ever worked. The scheme doesn’t make the players. Neither does the system. It’s the players who make the scheme. And if the players work, the team wins. That is the message at the heart of Foles’ words.

“I Never Requested a Trade”

Imagine being the GM of a contender in need of QB depth watching Foles pull together an unlikely win with that band of misfits on Sunday. Certainly, there was an executive somewhere thinking to himself: I sure could’ve used someone like that at the trade deadline. Then again, maybe that wasn’t an option.

I mean, teams were wanting to trade. It’s a crazy business.”

All right. So, there was (1) trade interest from teams, (2) a willingness from Foles to hear it out, and (3) interest from the Bears in making something happen if everything fit. But there wasn’t a mandate, request, or push from Foles to get on the move. Interesting. That seems to be different from the tone Foles had last summer when he was essentially asking to be sent to the Colts. He had never physically or mentally felt better, if you’ll recall. Not that it matters now, as this whole situation is water under the bridge. And yet, I can’t help but wonder what this means for the future.

Fields put a bug in my ear when he said he believes Foles wants to coach after his career (I even made a pitch for him to be the lead play-caller if Bill Lazor was unavailable to fulfill his duties). And that thought came across my mind yet again when hearing this:

"I was hoping we were going to go for two points. You might as well roll the dice right now and go for it."

Foles soooo sounds like someone who could take on coaching duties. In the moment, Foles was thinking and hoping the team would go for two points and the win. Sometimes, football is a thinking-man’s game. And if you’re not thinking along with it, then it can move too fast and throw a wrench in everything. That Foles was mentally in it in that moment speaks to where he is as a player. And perhaps to where he could be as a coach sometime down the line.

What Does the Future Hold?

Foles is under contract for the 2022 season. The Bears could cut him in the offseason, creating $3 million in cap space while taking on a $7.67M dead money hit. There is nothing to gain from a post-June 1 cut, so you can toss that option aside. It is evident Foles wants to either start or compete for a QB1 role. And while he seemed bewildered by the idea of a demotion to third-string duties, perhaps there is an argument to be made for Foles as QB2 in Chicago. That would have to be something the next regime (presuming there is a passing of the torch in the front office) has to sort through. But the Bears could do worse than Foles behind Fields in 2022.

At the end of the day, you’ve gotta love Foles’ honest assessments about … everything. It’s not much, but it’s refreshing.

For more from Foles, you can check out the video below: